This article is written by Krati Agarwal, pursuing a Diploma in M&A, Institutional Finance, and Investment Laws (PE and VC transactions) from Lawsikho.

Singapore Stock Exchange is going through its worst dry spell, with only 3 IPOs listings made this year. It resolves to revive liquidity in the market by its recent unveiling of SPAC Rules. The promising Special Purpose Acquisition Companies (SPACs) are tried and tested portions around the world by small companies to go public. SPACs, whose only function is to acquire another private company for a particular purpose, i.e., listing them in the stock exchange and making them public, are shell companies in a real sense and essentially act as a vehicle for them. Recently, Talkspace Inc. made news for being the only virtual behavioural health company to be traded publicly. This was made possible with the help of the SPAC merger. This article intends to throw light on the deal, the merger agreement entered between the parties, the deal’s aftermaths, and takeaways.

The companies and the deal

Talkspace Inc is a New York-based 2012 company intended to reduce hesitancy in seeking mental health therapies. It hosts multiple licensed therapists specialising in behavioural issues and is available virtually. This makes access to mental health care easy as people can send their therapists their problems, voice texts, and images anytime, sitting anywhere. This start-up boomed immediately and saw tremendous success during the pandemic, as mental health was severely affected during the harsh quarantine period. As of 2021, more than 22 million have used Talkspace to resolve their issues.

Hudson Executive Investment Corp is the SPAC which is formed by Hudson Executive Capital LP, a leading firm in investing in New York-based companies focussing majorly on real-estate, healthcare, industrial, retail, and media sectors. This company, being a SPAC, was exclusively formed to merge with an entity and to list on Nasdaq. It raised around $414 million by June 2020 IPO on Nasdaq.

The information was made public in January 2021 by Hudson Executive Investment Corp. about the definitive merger agreement entered by them with Talkspace Inc. After taking shareholders’ approval, the deal with Talkspace Inc. was closed in June 2021. The value of the transaction is $414 million of cash and a $25 million forward purchase from Hudson Executive Capital. An additional $25 million is committed by Hudson Executive Capital to backstop redemptions. The transaction is further supported by an oversubscribed $300 million fully committed PIPE at $10.00 per share. The company started trading publicly on Nasdaq with the name “TALK” in June 2021.

The definitive merger agreement was entered between the following parties:

The merger agreement also provided for customary representations and warranties and their termination upon closing. The transaction was contingent on the conditions such as approval by Hudson Executive Corp’s stockholders; termination of the waiting period under the amended Hart-Scott-Rodino Antitrust Improvements Act of 1976; no order, statute, rule, or regulation enjoining or prohibiting the consummation of the transactions being in force; Hudson Executive Corp. having at least $5,000,001 of net tangible assets as of the closing date; receipt of approval for listing on the Nasdaq Capital Market of the shares of HEC Common Stock; etc. This agreement could be terminated any time before the closing by mutual consent of both the parties or by either of them if the transaction was not consummated before 30 July 2021, or if the Government issued an order or taken any other action that is final that permanently enjoins or prohibits this merger or in the event of certain uncured breaches by the other party, and by Talkspace if, at the special meeting, the transactions and the other acquirer stockholder matters shall fail to be approved by requisite holders of Hudson Executive Corp’s outstanding shares.

All the conditions as stipulated in the merger agreement were fulfilled, and upon closing, certain other contracts such as registration rights agreement, subscription agreement, etc. were entered. The journey to Nasdaq can be summarised as: 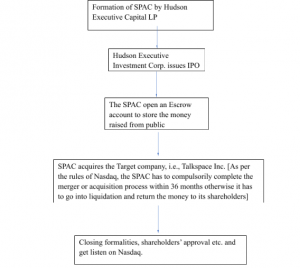 Aftermath and takeaway from the deal

If we assume a scenario where Talkspace decides to go public on its own through IPO, it will take at least two years for it to complete the whole process. Moreover, the business activity of Talkspace may not be attractive to the general public as there is still a lot of stigmas around mental health and behavioural issues. There may be a lack of popularity for this crucial innovation. Eventually, the company won’t be able to raise the desired sum of money. However, the path of SPAC has made Talkspace immune from all these difficulties. It has made the process easier as there are only a few regulations which the SPAC has to comply with to go public, the company can become public faster, it has been provided the appropriate recognition by experts of SPAC, which the public wouldn’t have. This merger offers Talkspace a better deal and gives it’s business better reach and popularity among the public. This is primarily because of the curiosity SPACs carry with them. The primary takeaways from this deal are the significant role SPAC plays in the current market. They can be summarised as:

1. Higher price to the founders

When the company goes for the process of IPO, the unit is priced such that the share price jumps at a large value on the day of listing. This results in founders parting away with the share of the company at a lesser price than its worth. But in the case of SPAC, the founders have a more significant say at a price and can negotiate a fairer deal with the sponsors.

Many start-ups today are technical and complicated. The founders might find it difficult to market their products/services to the general public because the public lacks awareness. However, when the deal is to be made with a SPAC, the panel of experts recognise and identify the technical innovation by the entrepreneurs. This offers them acceptance and helps raise public awareness, as the public is always attracted to a SPAC.

This is a much faster process than a traditional IPO. It can be completed in 4-5 months, while an IPO takes at least two years.

The regulations on a SPAC merger or acquisition are much lesser than the ones in an IPO.

As per the regulations of the stock exchange, if the SPAC fails to acquire a company, they have to mandatorily go into liquidation. This offers a sense of security to the shareholders that their money is safe and secure.

Sponsors are always at the receiving end of money in these cases. They usually take up a minimal stake in the SPAC and earn a lot of money through IPO. Even if the deal turns out to be wrong and the SPAC has to go into liquidation, they have earned enough to stay on the safe side.

The successful deal between Talkspace and Hudson Executive Investment Inc reminds us of all of the new advancements made in the trading sector. And this is just the beginning of SPAC culture. As of 2021, Nasdaq has recorded 548 SPACs from the year 2010. This number will see a massive rise in the coming years. With the SPAC’s vehicle’s advantages, many innovative & out-of-the-box ideas will get better visibility and public support. Singapore Stock Exchange is the recent addition to the frenzy over SPACs and aims to increase liquidity in the market through this route. This does not mean that the traditional IPO will lose its significance in the market. It is and will remain the favourite choice among many companies.

SPAC pills will not always make one immune. There are many risks attached to SPACs as well, one of such is that many celebrities act as sponsors to these companies and attract substantial public attention and money. These companies may not be a good investment but will still attract money because of the name attached to it. However, this is not a very good investment trend. SPAC serves as an efficient route for many young companies with limited credentials to launch themselves at a bigger stage; however, due diligence and caveats have to be maintained by the Buyer/public when following this trend.