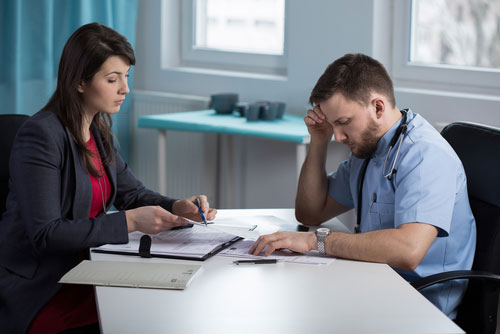 This article is written by Saksham Chhabra.

As we all know that the requirement of lawyers in the recent time has risen unprecedentedly because of the constant interference of the government in the judicial matters due to the pendency of the cases. Although lawyers are there to represent the aggrieved party and their case through proper legal proceedings. Lawyers are regarded as the medium through which one can get the Justice without any Hindrance. Since the incorporation of the Judiciary system in India, it has been seen and now it has become a very common practice that lawyers instead of helping out the people in getting justice, are more inclined towards conning people and extracting the handsome amount of money from them.

The Indian Law has evolved a lot with time and is the result of which the law has become so broad today and so is the condition of the lawyers in our country. The Indian Advocate act came in the year 1961 which set the guidelines for the lawyers in India as to their Qualifications and Disqualifications. This act was enacted to establish a base for the better delivery of justice to the people against whom any wrong is committed. One of the reasons to establish the act was that any person who starts practicing as a lawyer should be registered with the Bar Council of India so that there is no fraud and no unregistered lawyer is practicing in India.

In the early days, there was the practice of duping people by the lawyers and that is why the money involved in the profession is huge. But these days it has become a common thing to extract money from the clients who approach them in order to get justice. Many a times it is seen that lawyers are bribed by the other party to not fight the case properly and lose the case for a certain amount of money so that the culprit is not punished for his crime, which is done by majority of the lawyers and the victim is left to face all the problems and the process is costly and time-consuming.

Section 4 of the Indian Advocates Act of 1961 defines a Bar Council of India which shall consist of Attorney General of India(ex-officio), Solicitor General of India(ex-officio) and one member of every State Bar Council with a chairman and a vice-chairman at the top. The Bar Council of India has been established to regulate the legal functioning and legal education in the country by setting up a proper standard to which every legal institution has to adhere. The Bar Council also organizes its All India Bar Examination twice a year to test the qualifications of the people who have attained the law degree and to check their qualifications before practicing in the field of law, so that only the qualified lawyer get the license to get himself registered.

Also, as per the Section 3 of the Indian Advocates Act, 1961 with the presence of the Bar Council of India there should also be State Bar Council which should be present in every state of the country and can be different from other states as per the laws. Basically, state council works at a state level individually while the All India Bar Council works at the highest level regulating all the state bar councils in India. These are formed for quick redressal and better functioning of the law.

WHAT IS THE PROCEDURE TO COMPLAIN AGAINST A LAWYER?

Lawyers these days are very corrupt and money minded because of which they are involved in duping their clients and extorting money from them by charging hefty fees and delaying in proceedings and in many other ways, like not being present on the date of the hearing of the case. So seeing to the needs and legal rights of the people in the country there are respective provisions under the bar council as well as the state council for the punishment for any violation of the rules and rights of the people so for the benefit of the society at large. People can file complaints against such lawyers under the following authorities:

A complaint against a lawyer has to be in the form of a plant which shall specify the complete details of the lawyer (against whom the complaint is made) such as the name, address, phone number, enrollment number of the advocate and any other detail that shall be required by the procedure of the state council with a colour photograph of the person complaining on the front page of all 35 copies. After which the 35 copies including the original plaint after verification by the complainant by signing each and every copy on the last page is to be submitted.

In the Plaint, the petitioner is also required to mention his personal details such as the Name, phone number, email-id of the person in case the authorities want to contact the person lodging the complaint.

The authorities require the plaint to contain an affidavit on a non-judicial stamp paper of Rs 10/- which is required to be attested by the Oath commissioner or the Notary, to support the complaint.

The individual is also required to pay 500 rupees or more, depending upon the State where the case is filed as the complaint fee to the board with the plaint.

After the completion of all the above-mentioned procedures, the complaint will be considered in the meeting of the Disciplinary Committee of the State Bar Association and a notice will be served to the petitioner regarding the complaint and its further proceedings.

After that, the committee discusses amongst itself to understand, whether the complaint is required to be investigated as there are many people who file such complaints about wrong reasons. The committee then investigates into the matter and if it finds out that the lawyer is guilty of any such illegal or wrongful act then the Disciplinary committee of the State Bar Council chooses a particular date to hear the matter and serves a notice to both the parties to be present on the date of the hearing in the presence of the Advocate-General of the State.

PROVISO – If any party is absent on the hearing date then the courts have a policy to pass an exparte decree (it states that if either of the party is absent on the date of hearing of the case then the judge has the power to pass the decree in favour of the party present which is also called as Ex parte decree) and if both the parties are absent then the complaint will be rejected after which the petitioner will have to file a fresh complaint.

These proceedings are understood as Judicial Proceedings because of which section 193 and 228 of the Indian Penal code will be applicable to govern them. Similarly, the court where the proceedings will take place is regarded as the civil court, for which the Criminal Procedure will be applicable such as section 480, 482, and 485. On the fixed date the proceedings take place after which both the parties put forth their arguments before a judge and after hearing both the sides the judges decide the case and will give its judgment and some of them can be as follows:

The judge might dismiss the case if he does not find relevance and proper proof regarding the allegation imposed by the petitioner on the learned counsel.

The judge on hearing both the sides of the case may on evident proof finds that the allegations are correct then the Advocate can be punished and proper legal action can be taken against him.

The Judge can nullify the registration of the advocate under the All India Bar Council of India or may ban him from practicing in the future as the case may be. If the nature of the misconduct of the lawyer is low then the lawyer can be suspended from his office for certain period of time.

POWER OF THE STATE BAR COUNCIL

Every state has their own rules and policies to deal with such matters but according to section 35 of the Indian Advocates Act, 1961 if the committee sees that the complaint is not legitimate, it can dismiss the complaint in the first instance under this section and there is also a condition imposed by the council that the proceedings are required to be completed within a period of one year from the date from which the complaint was logged by the petitioner and if they are concluded after the said period then it will be regarded as illegal and will not be binding upon the respondent.

The procedure to file a complaint is same as in the State Bar Council. The Secretary of the council has the power to call the petitioner any time if he is not satisfied with the plaint or anything. The complainant has to also pay a certain amount of fees to the Bar Council of India for the matter to be heard and then proper investigation takes place if the matter is considered important by the members of the committee, then it is registered. The bar council on proper investigation starts with the proceedings after which it can pronounce its decision under section 36/37 of the act and if the parties are not satisfied with the decision of the Bar Council of India then the party has an option to file an appeal in the apex court of the country against the order within a time period of 60 days from the date of order. There should be no situation wherein the party is not given a reasonable opportunity to be heard in the court in compliance of the order of the Bar Council of India.

POWER OF THE BAR COUNCIL OF INDIA

As a law student personally believe that every citizen of this country whose rights are violated in such matters should be furnished with justice as soon as possible without any delay or problems. As Article 21 of our Indian Constitution grants every citizen of India the “Right to Speedy Justice” and if this is delayed or hindered due to any reason then it is a clear violation of the fundamental right of an individual. These cases are seen when lawyers, instead of providing justice to the clients are themselves extracting money from them and deceive them, which is a very bad scenario in India where people have so much faith in the Judicial System but in reality the whole system is corrupt. So we should be aware of what is going around and while selecting any such lawyer we should inquire as to while selecting one from the options available in the market, as the client is the customer of the lawyer and deceiving their customers has become the bread and butter of the lawyer.