Written by Col. Rajesh Tandon, pursuing Diploma in Intellectual Property, Media and Entertainment Laws by Lawsikho as part of his coursework.  Col. Rajesh works with the Indian Army for the past 28 years and has been handling the legal matters for 2 years. Notwithstanding what has been said above, in respect of the infringement of copyright of the plaintiff’s work, it was held in the case of Chatrapathy Shanmugham V S Rangarajan, 2004 (29) PTC 702 (Mad), that the following does not form the subject matter of infringement :-

The test of infringement is whether the infringer has made a substantial and unfair use of the complainant’s work. The  similarities which can not be mere coincidence is evidence of infringement.

Infringing Copy as per Copyright Act 1957

Infringement of copyright as per Copyright Act 1957

Section 51 of the Copyright Act 1957  describes the various acts which infringe copyright and other rights of the owner created by the Act. This provision says that the copyright in a work shall be deemed to be infringed under following circumstances :-

3. A reproduction of the work in any material form including the storing of it in any medium by electronic means or making translation of any work or making adaptation of the work would also fall under  the ambit of infringement of the copyright in the work within the meaning of section 51 of the act.

4. The explanation to section 51 provides that the reproduction of a literary, dramatic, musical or artistic work in the form of a cinematographic film shall be deemed to be an infringing copy.

Additional circumstances when Copyright is presumed to be Infringed

In addition to what has been covered under the copyright act 1957, the following circumstances also give rise to the case of infringement of copyright :-

Can an unregistered copyrighted work be infringed?

The types of Infringements that can be classified are as under :- The determining/governing factors in ascertaining the infringement of copyright

As a prelude to seeking a civil/criminal remedy in the case of infringement of copyright, it is always prudent to study the trend of judicial precedents which give out the general determining/governing factors to ascertain whether the infringement of copyright has even occurred in the first place or not before seeking any legal remedy. Such judicial precedents pronouncing the general trend of governing factors to be considered are discussed as under:-

5. In Francis Day v Bron, it was held that infringement of original work depends on a number of composite elements and it requires proof in the following manner :-

6. In Feist Publications Inc v Rural Telephone Service Co, the US Supreme Court held that following two elements must be there to prove a case of infringement :-

(i) The US courts in such a scenario have adopted a doctrine of “look and feel”of computer program which involves:-

(ii) In Computer Associates International Inc. v Altai Inc, the doctrine of “Abstraction-Filtration-Comparison” Test” was adopted by the US Court. It involved three stages as under :-

Filing of Litigation against Infringer including the Procedural aspects

The courses of litigation against the infringer is available to the owner of the copyright in the form of civil as well as less criminal litigation.

The issues related to filing a civil suit including jurisdictional aspects involved are as follows:-

6. Take down notice under Copyright Rules 2013: With the advent of technology and an era  of digitization, there is a lot of content availability on the World Wide Web which is vulnerable to infringement. Vide section 78 of the Copyright Act, 1957, the Parliament set up Copyright Rrules,2013. Rule 75 of the Copyright Rules, 2013, mandates upon a person whose copyright has been infringed on the internet to serve a notice to the intermediary for taking down of the infringing content. According to rule 75 (2), a take-down notice must contain the following particulars:-

Apart from the civil litigation, criminal prosecution lies upon the infringer infringing the right of the Copyright owner. The provisions and legalities of the criminal litigation are as under :-

3. Section 64 of the act empowers any police officer, not below the rank of sub inspector, if he is satisfied, that an offence under section 63 in respect of the infringement of the copyright in any work has been, is being or is likely to be committed to :-

4. Section 69 of the Copyright Act, 1957 deals with the offences by companies. Under this provision, where any offence under this act has been committed by a company, every person who at the time, the offence was committed was in charge of and was responsible to the company for the conduct of the business of the company, as well as the company shall be guilty of such offence and shall be liable to be proceeded against an alleged accordingly.

5. Section 70 of the Copyright Act, 1957 expressly mentions that no court inferior to that of a metropolitan magistrate or a judicial magistrate of the first class has jurisdiction to try an offence under the Act . The procedure adopted by the court in criminal proceeding is governed by the criminal procedure code i.e lodging a criminal complaint under sec 190 Crpc, 1973 read with sec 200 Crpc, for offences under sec 63 of Copy Right Act, 1957.

6. In the course of criminal prosecution , the first step is to lodge an FIR, which puts the criminal law into motion. In the following cases, it was held that the copyright infringement is a cognizable offence :-

The Diagrammatic layout of legal remedies  are available to the aggrieved party is as under :- 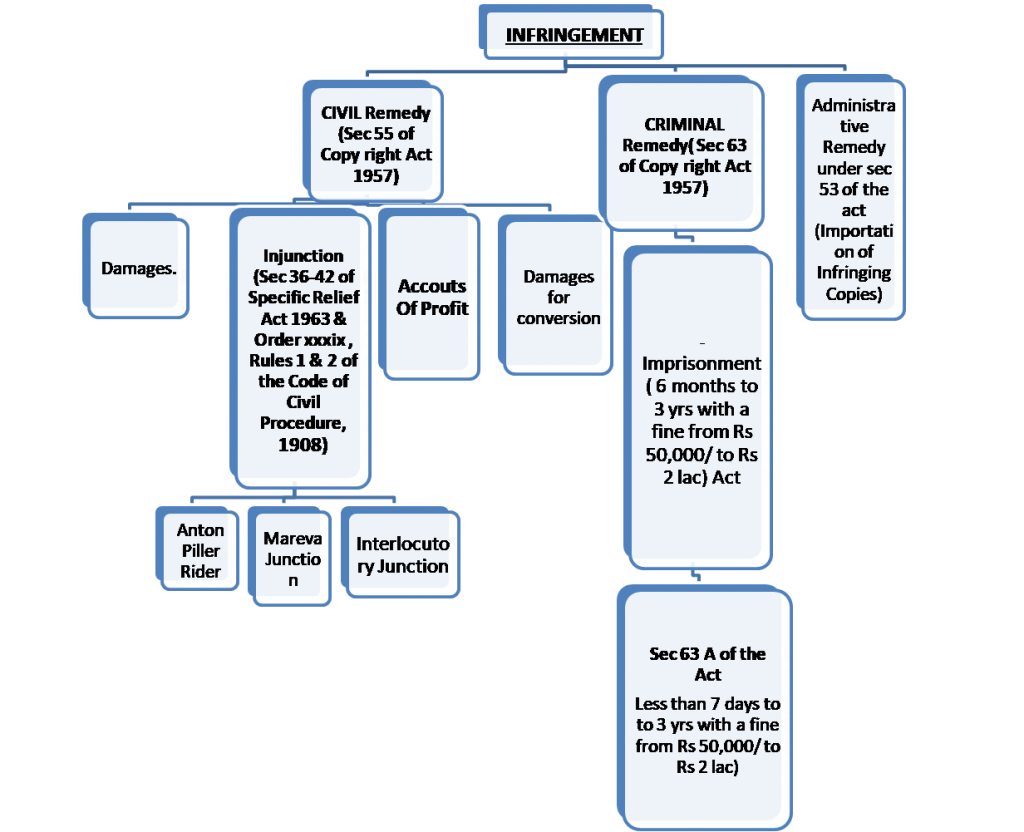 Description of Various Types of Injunctions

The various types of Injunctions  as under :-

2. Mareva Junction: Mareva Junction was adopted by the English courts in late 1970s after the leading case of  Mareva companies Naviera SA V International Bulk Carriers SA. This is a special form of injunction stopping a party from disposing of assets or removing them from the jurisdiction. This kind of injunction is given when:-

3. Interlocutory/Interim Injunction.   An interim or interlocutory injunction is a kind of temporary relief. The characteristics of this kind of injunction are as follows :-

The account of profits is an alternative to damages. The court may order payment to the owner of copyright of the profit made by the infringer as a result of the infringement.

Documents to be Prepared For Effective Filing

Following documents are desirable to be prepared for effective filing of the suit of infringement:-

Section 53 of the Copyright Act 1957 pertains to the importation of infringing copies. It is basically an admin remedy to prevent the importation into India of copies of a operated work made outside India which is made in India would infringe the copyright in the work . Section 53 provides an additional remedy and the nature of remedy provided by Section 53 is of Quasi  Judicial nature. It involves following :-