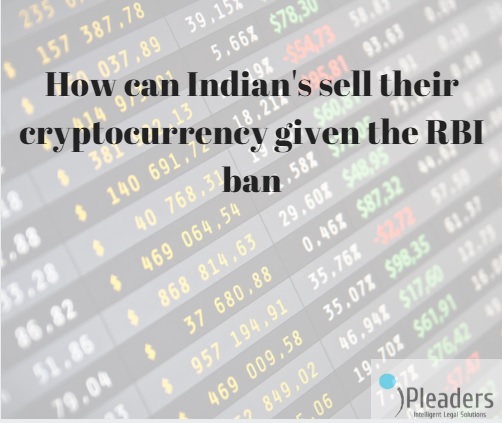 This article is written by Amit Garg of NUSRL Ranchi. The article discusses how to get bitcoins in india.

Cryptocurrency is one of the fast-growing financial instrument in India which generally is a virtual currency which works as a medium of exchange. For the purpose of securing and encrypting the transactions made through cryptocurrency, the technique of cryptography is used. It helps in coding the transactions made through cryptocurrency. In general sense, these are general entries in a database that cannot be modified easily. For the purpose of changing the entries, specific conditions must be fulfilled and these currencies function independent of Reserve Bank of India and are not regulated by any government entities or any regulatory body. People investing in cryptocurrencies do not have any official authority who can provide them with a mechanism to redress their grievances.

One of the most famous cryptocurrencies in Indian market is Bitcoin. It was the first virtual currency which was developed by unknown person or group of persons in the name of Satoshi Nakamoto. According to a research by University of Cambridge, by the end of year 2017, there were around 2.9 to 5.8 million unique users of cryptocurrency wallet.

On April 6, 2018, the Reserve Bank of India barred the banks and the financial institutions from purchase and sale of cryptocurrencies. The ban enforced by the RBI is applicable on all the banks and institutions that are regulated by RBI and they are therefore barred from dealing in all kinds with individuals and businesses in virtual currencies.

There was a notification released by the Finance Minister Arun Jaitley on behalf of Government of India that the virtual currencies are not a legal tender as they can be neither described as currencies nor do they come within the definition of coins.

The reasons for this ban as released by the RBI are:

The ban led to the stoppage in all the dealings in cryptocurrencies. The RBI provided for a 3-month window to get rid of the currencies held by the public.

There was a challenge to the decision of the RBI in the Supreme Court by the Internet and Mobile Association of India which demanded a stay on the circular issued by the RBI as the circular issued was arbitrary, unfair and unconstitutional. The Supreme Court in its order dated June 3, 2018 refused to stay the RBI’s circular prohibiting the banks and financial institutions from providing services in relation to cryptocurrencies and thereby from July 6 onwards, the restriction on trade of cryptocurrencies kicks in.

The judgement implies that the people now cannot trade in virtual currencies through the banking or any financial institutional mechanism. But the ban does not lead to the value of currency zero. People can still use it in person-to-person basis for any goods and services.

How Cryptocurrencies can be sold given the RBI ban

The first option available to the cryptocurrency holders after the ban over their holdings is by divesting their holdings in legitimate assets or investments in the window provided by the RBI. Virtual currencies require fiat money (currency which is declared by the government as legal tender but is not backed by a physical commodity) to trade but with this ban being imposed the fiat currency is totally plugged out from the system to trade in cryptocurrencies.

The 3-month window provided by the RBI can be used to transfer money back and forth from the fiat accounts, otherwise the entire holdings of virtual currency trading within India will eventually shut down.

In the wake of the ban imposed by the Reserve Bank of India over the exchange of virtual currencies through banking system, there was a negative impact on the entire Indian crypto sphere. There is a need for a new way by which people could sell/buy the cryptocurrencies in their possession. The new way was introduced by which currencies can be traded through peer-to-peer system. Developed by exchanges WazirX and Koinex Loop, this system seeks to eliminate the banking system which was earlier used for trade of virtual currencies. Through this system, people can directly buy and sell cryptocurrencies with each other wherein WazirX is used as an escrow account which holds the currencies until and unless the transaction is completed to prevent one party from defrauding other party or take advantage of the other party. For maintaining safety and secure the transactions held using WazirX, the KYC details of each buyer and seller are verified.

This process will definitely bring a blockchain revolution in India as this process ensures that there is no middlemen in the transactions done between the buyer and the seller and they can contact each other freely and without any hindrance.

With the ban imposed by the RBI over the usage of cryptocurrencies, there was a huge panic created among the people and this led people to sell their virtual currencies for a price much less than the original price. In order to deal with the situation, a new method was brought named crypto-crypto exchange where there was no INR involved. In this system, people can use the market volatility to trade and earn more by buying/selling between various cryptocurrencies available in the market. With RBI’s ban, the pair of INR-crypto has stopped and crypto-crypto exchange does away with the INR-crypto pair and hence there is no fear of legal actions being taken by the RBI.

Since the price of the cryptocurrencies is at a fall, people can at best do is trade the currencies currently in possession to maximize the cryptocurrency holdings by buying low and selling high. This can be done easily with crypto-crypto exchange which provides for many coins apart from Bitcoin which are highly volatile. It enables us to buy and hold many such coins with promising technologies which may not be able to buy with INR.

People those who are willing to stay in the trade of virtual currencies and desire to function without any disruptions by the RBI ban can transfer their holdings of cryptocurrencies to a foreign exchange. The transfer process is a simple one wherein all the holdings in a Indian Crypto Exchange will be easily after fulfillment of certain norms and documentation can be transferred to a crypto exchange in a foreign country. These transfers need to be in lieu with the forex regulations, Foreign Exchange Management Act (FEMA) and international remittance guidelines. Some of the foreign exchanges that trade in virtual currencies like Bitcoin, Ripple, Litecoin and Ethereum are Binance, Coinbase, etc. where a person can think of trading in long term.

The ban imposed by Reserve Bank of India has led to the banks and other financial institutions out of sight from dealing in cryptocurrencies. But this not at all leads to the assumption of the cryptocurrencies turning illegal. The trade in virtual currencies is still legal and there are four possible ways by which people can still trade in cryptocurrencies in a legitimate way without any fear of legal action taken by the RBI which are divesting of holding, P2P exchange, crypto-crypto exchange and transfer to foreign exchange. Thus, the ban did bring in a lot of hardships for the investors, businesses and the crypto-exchanges but the way out of this ban has also be developed side by side where people can still trade without the banking system.