In India, the laws pertaining to the grant of gun license are governed under Section 3, 4, 13, 14, 15, 16, 17 and 18 of the Arms Act of 1959 and the Arms Rule of 1962, Arms Rules 1962 and Arms Rule 2016. These Acts prescribe the stringent and expensive procedure for the citizens to procure the license for possessing guns. According to 2016 Article posted by the Washington Post, it was stated that India is a country which has stricter laws than America. Further, it also stated that the probability of an American getting killed by firearm is 12 times more than that of an Indian citizen.

Necessary reasons demanded by law for the possession of guns

Before knowing the procedure for getting the gun license, it is important for the readers to know that on what basis the civilians can apply for guns in India. From Section 35 to 46 of Arms Rule 2016 specifies special category for issuing the license namely:

Apart from the reasons stated above self-defence, corp protection and sports are the other reasons to get the gun license in India.

It is often said and believed that using a weapon for an offence is considered immoral but using it for the sake of self-defence is justified. The procedure for granting of gun licenses on the ground of self-defence is extremely difficult and stringent, therefore they are allowed in extremely special cases, a person applying for the license must have a strong reason and must have filed a First Information Report (FIR) prior to the application.

In case of women living in metro cities who are given priority on the condition that they are experiencing a threat to their life. However, for the sake of safety they may just possess Taser guns, which does not require any license.

People who work in security and guarding agencies are given the license only on the condition that they will use for the security purpose at work and no other.

A person getting the license for the reason of sports needs to be a fulltime sports person. Moreover, they can get a license for target shooting and other games.

Filing of an application

Section 13(1) of the Arms Act 1959 pertains to the procedure of application, which must be in accordance with Chapter II of Arms Act 1959 and also the prescribed fee must be paid. Moreover, gun license formalities are available at the Indian Ordnance Factories.

Call for the report

After undergoing all the due procedure and most importantly after the licensing authority is satisfied with the justification given in the application, the license for specific purpose is granted.

A license for a gun can be transferred by the person after his death to his legal heirs after following due procedure which is as follows:

Circumstances under which the license may undergo variation, suspension and revocation

The following procedure for variation, suspension and revocation is prescribed under Section 17 of the Arms Act, 1959.

In case the holder of a license is prohibited

If in case the licensing authority is satisfied by the fact that the holder of the license is prohibited under this Act or under any other law, or Statute abstaining him from possessing or acquiring or carrying any arms or ammunition for the time being in force.

Necessary for peace and order

If the licensing authority feels that it is necessary for peace, security and public safety, it may suspend or revoke it the license.

If the licensing authority confronts with the fact that the license holder hides some information or has given false or wrong information it may suspend or revoke his license.

Beach of a condition

If in case any condition for giving license is contravened and breached or there was a non-compliance of the notice by the holder of a license.

Application for revoking of license

The holder himself has given the application for revocation of license to the licensing authority.

Holder convicted by the court

When the holder of the license is convicted by the court, then his license may be suspended or revoked.

Hence, the High courts, appellate courts, the central government has the power to suspend the license. The holders are supposed to submit their license to the authority as soon as it is suspended or revoked.

For the renewal of arm license holder may write an application to the district magistrate in the format prescribed below: 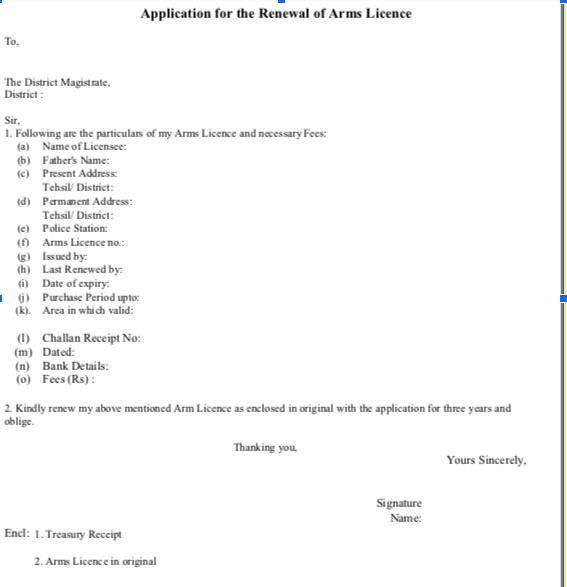 The government has come up with the latest Arms Rule 2016 which supersedes Arms Rules 1962, every person who is applying for the license must undergo a prior procedure:

Who can become a gun dealer?

A person who is willing to take the license must give written notification to the nearest police station. Further, a person needs to fill the ATF form which asks for the details including business name, contact details, tax ID number and zoning description. Then the application must be taken to the nearest law enforcement agency for the fingerprint, which may charge a fee, which differs from place to place. For fulfilling a procedure a fee is applicable and after the fulfillment of the procedure a person gets call for interview from ATF and if the AFT is satisfied then a gun dealer gets approval.

How to get gun shop license?

The gun dealers has been granted a license after filling the Form XI, XII, XIII or XIV shall be issued a composite license in Form VIII for the gun shop and also for the deposit of arms. These licenses are issued by the state government and renewed by the District Magistrate. Moreover, a dealer who wish to extend a service of the repairs of firearms have to obtain a license by filling a Form IX/ IX-A whichever is applicable.

Who can acquire guns without license?

Defence Service Rules empowers the defence personnels to have a gun without a license. Besides firearms issued under their service the military officials are given the privilege to keep one personal firearm. The only condition is that they need to inform about the same to their Commissioned Officer (CO) and make their CO enter the details including serial number of that gun in the register.

Gun From for different locations

Procedure to obtain license for the trade in Guns

Generally, it is a norm that a citizen can not import or export the guns based on the foreign trade policies. However, every general rule has certain exceptions and in this case also we have the exceptional circumstances, which allows to import any item from another country:

How many guns can be owned with one Gun license

On one arms license, a holder may own more than one gun. However it is conditioned that, each type of firearm needs to be exclusively endorsed after taking due permission from the license authority. The license holder may own a maximum of 3 firearms at a single point in time.

Therefore, it can be concluded that Indian laws on firearms are very strict and curbs the urge of Indians to embody in themselves the American trend of acquiring guns. In this regard American laws are very lenient whereas Indian laws regulate a very lengthy and stringent procedure. Strict arms laws in India are the reason of elaborated debates and rebuttals.