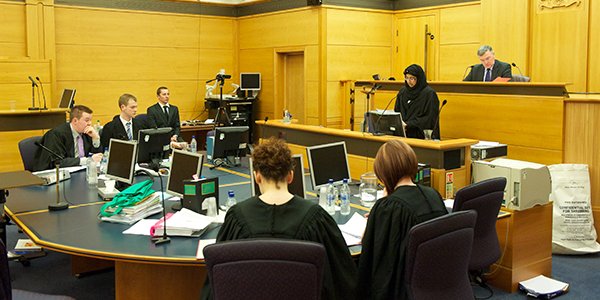 Within two months of choosing Commerce as my specialization in the 11th standard, for want of an off-beat path, or maybe it was a late onset of teen rebellion (who knows), I wanted to become a practising lawyer.

As I come from a business family with siblings who are engineers and PR professionals, there were no restrictions regarding my choice of career. None of us really stayed the same course anyway, so it seemed natural for me to stray further from the off-beat path.

But, no one in my family knew a lawyer, so there was literally no guidance for me to seek from them. I tried making my own way and learnt as I went along ever since I can remember.

Most law students, including me, have at some point shared a dream, of standing before an esteemed bench and arguing their case before them. The law school gives us a taste of the courtroom experience through moot-courts. Although, it was a part of the law curriculum in the final year, most of the law schools also have a moot court society which conducts both inter and intra-moot court competitions throughout the year.

The idea of moot courts or mock court trials is simple: inculcating the wholesome approach towards a case in the law students.

The students are usually given a fact-sheet which gives a brief background of the dispute in question between two or more parties and are allotted sides for the Plaintiff or Defendants. There are usually teams allotted to work on a fact sheet which includes two speakers and couple of researchers. Within a stipulated time the law students have to research their cases, frame their arguments, prepare their responses to the dispute in the form of plaint/petitions and affidavits in opposition/replies. Then on the day of competition, the participants have to argue their respective sides before a panel of judges, who scores them on different aspects of their performance. It could be drafting, researching, oral submissions, etc.

I started mooting as soon as I could, i.e., from my first year itself and I scrambled to get my draft prepared and plead before the intra-school judges! It was like an audition to represent my college in inter-college moot courts in national law schools.

I had no idea how to analyse a fact sheet or how to even begin my research in the first place. So, I hung around the library and sought help from my seniors! They told me to start with the bare act. I did not know what a bare act was! I had to figure out that it was simply the bare provisions of laws. This was just the beginning. I had to frame my arguments and find case laws and legal provisions to support my arguments.  After everything, I came to know that there is some specific format of font, spacing, footnotes, etc. that has to be maintained to get a higher score in the competition. This gave me a glimpse of the amount of work it takes for a single case and it was a lot! I scored an average score and could not qualify for the national moots that year.

However, I kept at it and got my first national moot in my second year of law school. It was an exciting process. We had two sets of facts – criminal and civil. I was part of a three-member team and was one of the speakers. Soon I realized that I had more inclination towards criminal law than the civil law. To each his own, right? Anyway, after multiple rounds, we won the moot competition. What a rush it was!

After that, I continued mooting in intra-school competitions as it was highly competitive and extremely value adding to my development as a lawyer. It resulted in scoring higher marks in my final year moot competition thereby improving my overall scores.

There are several things that one can learn on their own and peers. You can even go for online courses on mooting which can be extremely helpful for any mooter or aspirant, to ward off the anxiety of speaking or the preparation.

Let me give you five mooting tips on how to moot which are extremely useful if you are just starting out:

If you think you can work alone, think again. We all need help to overcome our gaps in learning and performance. To realize the importance of teamwork just remember that Nick Fury had to assemble the Avengers and even Deadpool held an audition for the X-Force, to fight off the villains, when needed.

I remember having constant arguments with my team regarding one approach I’d taken. They kept refuting and questioning my stance. Although, it irritated me to the core it made go back and research each time to make my arguments more sound.

It is always better to work with a team or with people. Use people as soundboards to brainstorm your ideas and come up with stronger arguments. Set aside your ego or fear, whichever is the case, and seek help from your teammates, seniors, friends, even professors if need be. Remember you are arguing opposite someone, so it is better to have the kinks in your research or arguments sorted by discussion and practising your arguments multiple times with your team beforehand. There is strength in numbers.

Being law students you have to know the relevant laws – you cannot walk into a courtroom – even a mock one – without knowledge or preparation. So you always start with the bare acts. Think of the applicable laws to your set of facts and read the bare legal provisions first. You have to build your understanding and interpretation of the law and then you can go ahead and consult case laws and conceptual articles or books around the subject matter. Build your own approach to arguments accordingly.

For instance, if you have a dispute on data protection and data privacy, you cannot rely on the specific law, as there is no specific legislation in place. So, the next best approach is to come at it from the constitutional right to privacy and support with provisions of the Information Technology Act.

The knowledge of various rules and different approaches to the interpretation of laws is crucial. You can start with the interpretation of an ordinary statutory law, the relevant constitutional provisions and then the executive rules or by-laws. Simply put, learn the law and then see how you can use it to support your arguments and try various approaches towards the same.

TAKE YOUR TIME WHILE FRAMING THE ARGUMENTS

The best of articles and stories have a natural flow, a clear beginning, a middle and an end. Story-telling should be organic in nature, so should your arguments. The framing of arguments is crucial to your oral submissions as well. It has to be constructed with patience and sufficient thought process.

In both moot courts and actual practice, the sequencing of arguments makes a significant difference. Not only should it flow naturally but also the strongest ones should be addressed in a timely manner, so as to capture the judges’ attention. This also helps the bench to take one seriously.

The best of lawyers can argue any side of a given dispute. So, during research be prepared for different approaches to your argument, in case the opposing party may find a weakness in your main approach.

Once, a judge on the moot court panel was adamant in a murder case that as per facts the accused had confessed and hence he had to be held guilty. Instead of merely stating that the confession was coerced by the police, I had to quickly change my approach by adding that the discovery of the alleged weapon did not follow the proper chain of evidence and therefore was inadmissible as evidence in the matter. That satisfied the judge just enough to allow me to move on to my next argument.

The moot court judges, as well the actual judges, have to be appeased with one’s arguments. Throughout the day listening to multiple rounds of arguments can affect the temperament. So one has to be extremely well prepared as to not waste the time by dilly-dallying in the oral round.

During the oral rounds, start by giving a broad structure of your proposed arguments. The bench should know the components of your argument and their sequence. This is most helpful in moots as each argument has sub-arguments. It helps to give the judges a clarity about the broad picture of one’s arguments and approach. It also adds to the flow of the narration of one’s side of the dispute in a clear manner which helps both the speaker and listener. Keep things simple.

So does mooting add value to one’s career in the long run?

An actual courtroom experience differs significantly from the moot courts because the stakes are different. You’re representing a client for money or a cause instead of mere points now.

I know of a few friends from my batch who found mooting intimidating and too time-consuming. They stayed away from it. Some of them even went into litigation as professionals. However, the mooters go into litigation, definitely feel more at home in their profession right in the beginning as compared to the non-mooters. It eases some of the anxiety and pressure, just to be a little prepared. These mooters have been practicing analyzing, researching, drafting from college days, after all!

I’d suggest that you do not be the ‘few-friends-from-my-batch’ and go ahead and do that moot. Don’t be afraid of public speaking or, for that matter humiliation due to being unprepared. In fact, take this as a learning experience. It takes 3 things to be a champion mooter: preparation, hard work and determination. These three coupled with guidance and resources to do well in mooting can make a remarkable difference in your mooting career!