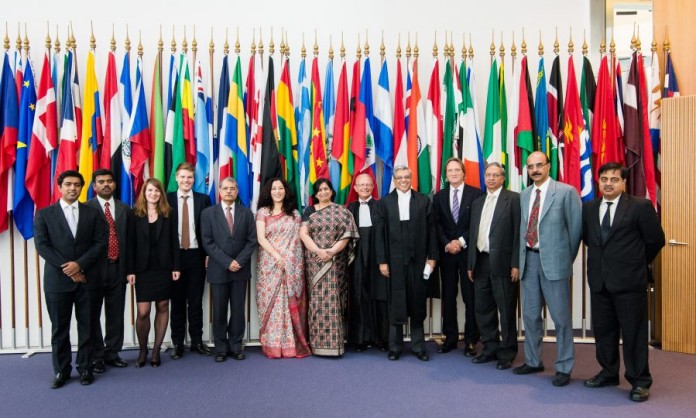 In this blog post, Ranjeet Yadav, an Ex-Commissioner of Railway Safety with the Indian Railways and a student pursuing a Diploma in Entrepreneurship Administration and Business Laws from NUJS, Kolkata, describes the London Court of International Arbitration in India.

The London Court of International Arbitration (well-knowned as LCIA) is an institution based in London, United Kingdom providing the service of institutional arbitration at an international level. Though its administrative office is based in London, it is an international institution whose activities are spread over the globe to provide forum for dispute resolutions for all parties, irrespective of their geographical location or system of laws. Its origin dates back to 1883. Over the years, it evolved with different names as a tribunal. In 1903, the tribunal took the name of the London Court of Arbitration, and in 1981 the name of the court was changed to ‘The London Court of International Arbitration’ to reflect the nature of its work which expanded world over.

Setting up of LCIA India

LCIA India began its operation in 2009 in Delhi and was operationally independent of the LCIA. It was established with the objective to bring international quality arbitration to Indian parties at costs compatible enough to Indian rates. The institution operated under a three-tier structure, consisting of the Company, the Arbitration Court and the Secretariat. As a company, it was incorporated under the Indian Companies Act as a non-profit entity. Its board of directors composed of well-known Indian and international arbitration practitioners. The administration of arbitration cases was not in the purview of the board. The LCIA Court of Arbitration served as the arbitration court of LCIA India. Its main role was to appoint tribunals, decide challenges to arbitrators and to control the costs of arbitration. The LCIA Court is a multi-national body served by eminent practitioners of arbitration laws. The LCIA India Secretariat was based in New Delhi. It was headed by its Registrar who was responsible for the day-to-day administration of disputes referred to LCIA India. The function of the secretariat was purely administrative and it had no role with regards to legal services or advice.

It published its first set of rules in April 2010. These rules were to a very large extent based on the LCIA’s own tried and tested arbitration rules, but with changes to reflect the interface with the Indian Arbitration and Conciliation Act, arbitration practices in India and various decisions of the Supreme Court of India on matters related with arbitration cases.

Some of the salient features of the LCIA India rules are as follows:

2) Article 10 of the rules gives power to the LCIA Court to revoke an arbitrators’ appointment in the event that the arbitrator does not conduct or participate in the arbitration proceedings with reasonable diligence, avoiding unnecessary delay and expenses.

3) Article 14 of the rules places corresponding duties on parties and tribunals to ensure that proceedings are conducted fairly, efficiently and expeditiously.

4) A number of new provisions aimed at expediting proceedings have been included in the rules. They include an express requirement that all prospective arbitrators confirm their ability to devote sufficient time to ensure the expeditious conduct of the arbitration. It also provides that the arbitration tribunal may take into account the conduct and cooperation or non-cooperation of the parties during the arbitration while determining the allocation of costs.

5) LCIA India has also prepared set of “Notes for Arbitrators “, to provide guidance to arbitrators conducting arbitration under its rules on issues relating to independence, impartiality, confidentiality and the management of time and costs.

6) The LCIA India Rules though are directed at parties doing business in and through India, and are essentially an international set of rules which are suitable for operation under any system of law and can be used in any seat chosen for arbitration.

7) Apart from being an efficient mode of providing alternate dispute redress, arbitration is envisaged to be making the justice available at lesser costs also vis-à-vis litigation. The LCIA India rules came up with an extremely attractive framework of arbitration costs keeping this spirit in mind. It endeavoured to change the perception that the institutional arbitration was less cost-effective than ad hoc proceedings which had hitherto deterred a more widespread use of institutional arbitration in India. The Rules provided for an hourly rate of compensation for the arbitrators capped at INR 20,000 per hour. This was a welcome departure from the generally prevalent practice in India of per sitting fees charged in almost all ad hock arbitrations. These sitting fees varied from INR 25000 to INR 100,000 charged by former High Court judges, and between INR 50000 and INR 150,000 charged by former Supreme Court Judges, depending on the values of money involved in claims/counterclaims and complexities of the case. A sitting is usually capped by arbitrators at 3 hours, any spill over is treated as the second sitting for the day. As most of the arbitrators undertaking ad hock arbitration also charge an initial ‘reading fee’ and separate fees for drafting the award, the fees prescribed as per the LCIA rules were considered to be attractive for the parties to decide in favour of institutional arbitration.

The rules also put a cap on its administrative charges, making them within acceptable figures for the parties. Besides, the rules mandated the arbitral tribunal to award costs based not only on the outcome of the arbitration, but also on the conduct of the parties during the proceedings which caused undue delay in concluding the arbitration proceedings.

LCIA India also recommended certain clauses to be incorporated in contract agreement by the parties who intend to have future disputes referred to arbitration and/or mediation under the auspices of LCIA India. Some of the important clauses recommended by LCIA India were:

In India, ad hoc arbitration is being usually practiced (nearly up to 95%) due to its perceived flexibility and comparative low costs. But in many a case, due to lack of predetermined procedural rules it resulted in protracted and expensive proceedings.  On the other hand, institutional arbitration has been few and far between. With setting up of LCIA India in New Delhi, it provided a great fill up towards the enlargement of scope of institutional arbitration which is a much superior system. LCIA being a well-established internationally reputed institution for arbitration, LCIA India provided a hope to Indian entities to be in a vantage position to avail world-class dispute redressal mechanism at a reasonable cost at the convenient location. It also provided greater opportunities for Indian lawyers and law firms to represent clients in administered international arbitrations. Besides, the institution also facilitated in spreading international arbitration techniques and contributed towards introducing international best practices in India by way of organising symposia, conferences and other training initiatives. These initiatives helped in creating a larger pool of competent arbitrators in the country.

Despite its short life span, LCIA India played an important role in dissemination of the benefits of institutional arbitration in India.