This article is written by Lakshmi Pillai, who is pursuing a Diploma in Advanced Contract Drafting, Negotiation, and Dispute Resolution from LawSikho.

In today’s world of hefty competitions, it is paramount to have a good marketing strategy. With the emergence of industrialisation, globalisation and technology, everything is just a click away. But at the same time, nothing is equal to our friends or dearest advice. We believe in humans more than technology. Even that’s the reason behind why when we buy something online we never forget to go through the reviews and feedback given by customers.

You may have a question as to how it is related to an agreement here. Well, the finder’s fee agreement is something similar to this psychology. To make you understand the nexus let me first define the type of agreement we are going to discuss. Whether you are having a small business or a large brand, you will always be on the hunt for new customers. So you will always like to be referred by any other business entities or your colleagues which make a trust-based relationship and help you to reach out to new customers. And this is important especially when you are trying to do a business in the new segment and attracting new customers to your business from the market. So herein, the finder’s fee agreement comes into the picture which you shall use when you are opting for a new venture in your business.

Finder’s fee agreement is basically an agreement that is made out between an individual and firm/company. Here an individual can be an investor or customer who is building a business relationship with the company by making an investment or buying a product on behalf of another respectively. This agreement is also called a “referral agreement” wherein the finder’s fee is referred to as “referral income” or “referral fee.” So basically it is a commission that is paid to the second party by the first party while intermediating or facilitating a transaction with a new customer.

As this agreement is going on without any boundaries, it is always important to set a line. Hence it is always preferable to set out a line and make a written agreement between parties so that when a problem or dispute arises, they can work out an amicable solution. This agreement contains provisions like jurisdiction which explains where services are to be rendered, about the role of the person who will act as a finder, the amount of commission available to the finder, criteria for compensation, etc.

Why we need a finder’s fee agreement?

Finders basically are those people who cannot be exactly called as a broker, but they arrange transactions and make the deal for the business persons with potential clients. They can be considered intermediaries who bring in new businesses or new deals. They connect interested parties together. So, hence as per the profit made by one of the parties, they ask for the share or commission of profit which is made during the transaction in which they helped. Hence it is always essential to make such agreements prior to the dispute.

Finder’s fee : facilitating a potential customer to the company

Generally, for such arrangements, an agreement is not required. But however, it is better to keep an agreement for every deal, especially when the facilitator is attracting the customers to the business repeatedly. If the finder remains the same then there can be an elaborating schedule in the agreement agreed between the parties with regards to the increase in the percentage of commission from the deal to deal. The fee can be considered as an “informal gift”. And this fee is different from a service charge which is a mandatory fee paid to a person or business in exchange for completing a service.

Let’s discuss some of the important provisions which need to be noted while making a finder’s fee agreement: 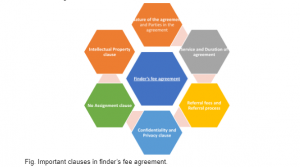 It is also important to include an exclusive clause or non-exclusive clause as per the necessity. However, the first party will prefer to have an exclusive agreement as he will always like to have his referral partner not enter into any other similar arrangements with other business parties. For some, it seems to be not beneficial but other businesses may earn benefit from such clauses. So it is on the parties to understand the requirement and put clauses accordingly.

Duration of the agreement: looking at the provision

There can be two types of agreement on the basis of duration:

1) Short term – This term can vary from few months to two years.

2) Long term – The duration herein is as per the wish of the parties. The term can go on till the parties terminate the agreement as per the requirements of the finder’s fee agreement.

Duties of the finder and referral fees

The agreement should have the exact method laid out for the calculation of the referral fees. The parties can have a schedule attached with the agreement wherein they can state what will be the procedure of the calculation when there will be an increment in the commission etc.  Further, the fees can be differed by qualifying referrals:

For eg.: If Party B just refers one party to Party A then the fee will be less, however, if the referred party of Party B converts into a customer of Party A, then there will be a flat fee which shall be provided by Party A to Party B. The payment method, the due date, all such things shall be mentioned in the agreement, so as to avoid payment disputes in the future.

This is an important clause that shall be settled by the parties while entering into the contract. In this clause, the parties can add the process which is to be followed by the other party. Like how Party B shall give the details of the referral, whether it should be via email, online referral process, or some other way of communication.

In this clause, you can also add a measure to determine the efficacy of the referral process. And, you can also specify the desired customer persona in the agreement. To avoid dispute it is always advisable to have a minimum performance standard in the agreement. This will help to sort out money disputes and cut off customers who are not fit as customers/investors for the company.

Under such a situation both the parties need to trust and be honest with each other. But those things on air do not work, it has to be on paper. And also when the information gets leaked it can cause a huge loss to the party. So it is always advisable to have a non-disclosure clause for confidential information shared between the parties to the agreement and put a restriction of not giving away the information to the third party unless required as per the agreement.

To the confidentiality clause there are general exceptions:

Status of the finder

This clause gives the status to the individual as per the agreement.

It is an important clause to put a restriction on the second party regarding transferring rights to the third party.

Disclaimer of other relationships

This is a unique clause that can be added to the agreement for the interest of both parties. Such clause initially gives a disclaimer under which it states that both the parties shall not create any relationship with regard to in terms of:

5) Licence etc. with another party.

The agreement shall have a clause that says about the licensing of intellectual rights from one party to another party. Under this clause, the party can add the conditions and rights of the other party with regard to the usage of intellectual properties of the company.

Facts  of the case

Observations and judgment by the court

The court observed that oral agreement can also prevail under such arrangements and the plea raised by the defendant regarding the license is not a valid point. Because to be a finder the individual need not be a licensed, real estate agent. Hence the appellate court reversed the directions of the trial court.

For any business to get a potential client it is important to run the business. Sometimes the company itself propagating its services would not build trust in the customers, so rather than interacting with customers directly, getting referred by the finder is an alternative to attract new customers. Therefore,  having a standard finder’s fee agreement will be quite beneficial to the companies when they want to invite customers indirectly. Including the above-mentioned clauses will definitely be helpful for both parties and that will also reduce the probability of disputes.

All about the contract of carriage

All about contract costing