This article is written by Alfaiz Nizami while pursuing a Diploma in Business Laws for In-house Counsels from LawSikho.

Do you know why all great philosophers are considered great? It is because 100 years ago they said something which makes sense now.

If you hear the words Blockchain, Bitcoin & Cryptocurrency then you may find 100s of articles explaining the terminologies on the internet but they are filled with jargons and are difficult to understand especially for a person from a non-tech background. This article will try to explain the concept in layman terms and equip you with handsome knowledge about its usage with examples. In the end, you will be able to make an informed decision on whether to invest in the Crypto market or not?

What you will learn from this article-

We Indians always run after stability. But in the Post-Covid scenario with limited government jobs and uncertain private sector, people have started to discover and look for other ways to diversify their income. But all money comes down to paper at the end. Have you ever wondered what if your banks go bankrupt?

Yes, it can happen. So, it’s time to broaden our perspective. Cryptocurrency is a type of digital asset/currency which is secured through Cryptography. They are based on Blockchain technology and are immune from government interference as they are not issued by any central authority. 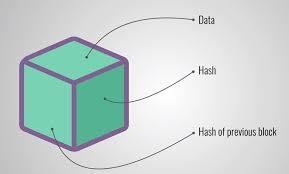 It is a type of Digital ledger; each block contains Data, Hash and Hash of previous blocks. Hash of the previous block creates a chain of blocks. The chain of blocks is called a ledger and when it is distributed to everyone part of the network then it’s called Public Distributed ledger. The data contained inside the block depends upon the type of Blockchain. For eg- the Bitcoin Blockchain contains transaction information. While a hash is like a unique code associated with each block. If someone tries to change the Data inside the block, Hash will automatically change which will become apparent on other blocks as well through the Hash of the previous block. Hence it will make the whole Blockchain invalid. Therefore, it is nearly impossible for any person to hack the Blockchain. Hence, it’s established that it is the safest way of storing any kind of data.

Let us understand this with the help of an eg-

The data stored inside the block of Blockchain can vary. For eg- Walmart uses food safety Blockchain. Each Node (Device preserving the whole history of transaction of that Blockchain) on the Blockchain represents an entity that has handled the food on the way to the store. So, when any customer finds a damaged product. Walmart can easily identify the point of damage using Blockchain. Thus, Blockchain makes any transaction transparent and traceable.

Factors determining value of a Bitcoin

Cryptocurrencies are decentralized hence they are not bothered by market fluctuations or any economic factors. They are determined by the following criteria listed below-

(Wondering what Bitcoin mining is? It’s the process of confirming transaction on the Blockchain by using super-efficient computers)

“Don’t think of Bitcoin as a currency, think of it as an asset”.

Big giants like Tesla, Paypal, Burger King and many other companies overseas have started accepting Bitcoin & other Cryptocurrencies as a mode of payment.

The common notion floating around is that CryptoCurrency is a mode of payment or path for investment. Yes, but it is equally important for any investor to understand how the investment will be used and what scope it has in future. All the Cryptocurrencies listed on any Crypto exchange run on Blockchain technology and offer different types of services.

For eg- There is an upcoming Blockchain technology by “Kleros” which can be used for dispute resolution to get quick and affordable remedy to the consumers. Judgements will be given by anonymous Jurors. Kleros will act as impartial and incorruptible third party using its Blockchain technology for smart contracts and secured evidence collection and transmission to the Jurors.

Smart contracts are self-executing contracts. For eg- if A and B enter into a contract for developing a website. As soon as the requirements mentioned in the contracts are fulfilled the fees agreed between the parties will be transferred resulting in reduction of contractual disputes.

Now Blockchain technology is also being used for NFTs. Blockchain helps in removing intermediaries and connects the artist with customers which will create an open market with secure transferability.

Wondering what’s an NFT? They are non-fungible tokens. For eg- Bitcoin is fungible- trade one for another Bitcoin. So, they cannot be traded like Cryptocurrency at equal rates. NFTs can be anything digital or physical for eg- an autograph, painting, music, etc.

Although it seems like it will take forever for Indian companies to follow up. But the situation is contrary. India-based companies already have their hands in the Crypto business.

Similarly, there are thousands of new projects and every project has its own Blockchain technology which is used to solve and make things more efficient & hassle free in various spheres like health, legal, finance etc. Investors invest in those projects in which they see potential.

Why should you invest in Cryptocurrency?

Bitcoin is scarce just like gold which is why Bitcoin is also considered as a store of value to protect your wealth and act as a hedge against inflation or any kind of economic crisis.

In 2009, a person/group named “Satoshi Nakamoto” whose identity is still unknown to the world invented Bitcoin.

In March, 2020, a single Bitcoin was valued at around 4000$ (3 lac INR) and fast-forwarding to March, 2021. Bitcoin touched 60,000 $ mark (45 lac INR). That’s just one example and there are tons of other coins known as Alt coins (All the coins other than Bitcoin) which exploded like Bitcoin. Hence it is established that Crypto markets are highly volatile.

The apprehension among most of the people is that Bitcoin is very expensive and not affordable. That is where you make a mistake. Investors can always buy parts of a coin or invest in Alt coins which are relatively cheaper than Bitcoin and still earn bag loads of money.

Wondering why we need Alt coins? The reason being Bitcoin is not perfect and every Alt coin offers something unique. For eg- Lite coins can confirm transactions faster than a Bitcoin.

The Return on Investment can be covered within 2-3 months however this is not the case in Stock Market or any other type of investment. It usually takes years to give back the return on investment.

There is no law in India which makes it illegal to invest/trade in Cryptocurrency as of now. RBI circular dated April 2018 banned bank payment systems for being used for Crypto currency payments. But the Supreme Court in March 2020 overturned the blanket ban on Cryptocurrency. There is still no crystal-clear law on Cryptocurrency in India but if you are going to wait till legislation comes into picture then it will probably become very late to enter the market as most of the potential currencies will become unaffordable. Just like any investment it’s always suggested to buy low and sell high. The predictions are being made that by the end of this year Bitcoin may touch 70,000 $ mark. So, if you are planning to enter the market, now is the time.

It is almost impossible to predict the future of Cryptocurrency, the only way is to speculate using the trends followed by the developed & developing countries. Countries like Malta, Singapore, Argentina, and Switzerland have already started adopting Blockchain legislation and legal framework.

Finance Minister, Nirmala Sitharaman stated, “Not shutting all options on Cryptocurrency” at India Today conclave. Based on these news updates, it is speculated that the Government of India may issue some guidelines to be followed by Crypto exchange platforms like Wazir x, Coindesk etc. There is also a speculation that some tax may be levied on Cryptocurrency trading/per transaction.

Hence, the probability of Cryptocurrency getting completely banned is bleak. So, if you blame yourself for not buying any property when it was cheap or not buying shares of that company which could have made you super rich then you are probably going to blame yourself again in the next 5 years for not investing in the Crypto market because the potential of Blockchain technology has not even touched 1% and there is tremendous scope in this field as each passing day Cryptocurrency is becoming more legitimate.

Disclaimer: Crypto markets are highly volatile either they can make you a millionaire overnight or drag you to the streets. It is highly advisable to enter the market under guidance from any expert or professional and only make investments which you can bear.