Mostly there arise two types of disputes relating to an NRI marriage.

Parallel matrimonial petitions, one in the foreign country where the couple is residing, and another in India by the parties is very common.

For more on Frauds and problems relating to NRI marriage, please visit https://blog.ipleaders.in/issues-in-nri-marriages/

Various laws governing NRI marriages are Hindu Marriage Act, 1955, Special Marriage Act, 1954, The Foreign Marriage Act 1969 and other personal law through which both the spouses are governed. The law under which the parties have married is the law which will govern the marriage disputes. Other rights relating to matrimonial alliances such as inheritance and succession, adoption are also regulated by the same family of law.

Interestingly, depending on the laws of the country where the couple resides, even the laws of that country may apply to marriage, divorce and all other sorts of disputes.

Provisions of Sections 3 and 4 of the Indian Penal Code comes for rescue in cases where an NRI husband or wife is harassed by spouse or in-laws in a foreign land. Section 3 gives criminal jurisdiction to the courts to try for an offense committed by a person beyond the territory of India provided such person is subject to Indian laws. This sections also applies to those who are covered by any special law bringing them under Indian jurisdiction such as Hindu Marriage Act 1954 or Special Marriage Act.

There are cases where in-laws while sitting in India exerts pressure for dowry on their daughter-in-law living abroad. In such cases, Section 108 of the Indian Penal code says, “A person abets an offense who, in India, abets the commission of any act within and beyond India which would constitute an offense as if committed in India.”

Here is a stepwise solution on, what to do if NRI husband or wife is harassed by spouse or in-laws.

Step 1 First and foremost, you must not come under pressure to accept the demand for dowry or any other unreasonable demand made by or on behalf of your NRI/ PIO husband to end your ill-treatment, abuse or desertion.

Step 2 You can approach the nearest Indian Embassy/Consulate for assistance/advice, to file a complaint with the local police about harassment, abandonment, ill-treatment, etc.

Step 3 The Indian Embassy/Consulate can assist in providing contact details of local NGOs, approach the local police, contact your family/friends, etc. who could help you.

Step 4 The Indian Mission can be contacted for initial legal/financial assistance to file a case against your husband in the foreign country.

File the police complaint locally and try to solve the problem with the help of local authority first.

Step 5 As the NRI holds the Indian citizenship they can file for cases under the Indian Penal Code for 498A, or other such penal provisions in the Indian Court.

Step 6 Indian courts are competent to entertain such pleas. Therefore, do not be afraid of legal issues while filing the case.

Can NRI file for a divorce in the USA

Indian state police such as Punjab police have opened an online portal to give solutions to these problems. Filing a case in India from abroad through a lawyer. Special Power of Attorney

Special power of attorney (SPA) can be used by a person living abroad to file a divorce case in India. SPA gives the power to an advocate to act legally on your behalf. The process for creating Special Power of Attorney is as follows-

Step 2 Getting the deed attested from the Indian Embassy or the Consulate.

Step 3 Signing of all the pages by the person making the Special Power of Attorney.

Step 4 Posting your notarized Special Power of Attorney to a trusted person in India through a registered post.

Step 5 The trusted person can get the Draft registered as a Power of Attorney by the appropriate government.

Special Power of Attorney can be used only to file the case. Both the party should be physically present in the court during the respective hearing. As explained in the later part of the article, Indian Court can order to confiscate the passport in case of non-adherence to the summons.

Do get your marriage registered in India

It is advised to get your marriage registered with a Registrar of the Indian Court. Marriage certificate helps to settle out disputes in numerous ways. Before leaving the country with your NRI/PIO husband or wife, do get the marriage registered in the office of the Registrar in an Indian court.

Yes. The Ministry of External Affairs, Indian have come out with a plausible solution to this problem. There is a scheme on  “Legal and Financial Assistance to Indian Women Deserted by their Overseas Indian Spouses.” The scheme is a welfare measure to support women of Indian origin who have been deserted by their overseas Indian spouses fraudulently, through the Indian Mission abroad with their empanelled NGOs, lawyers, etc. 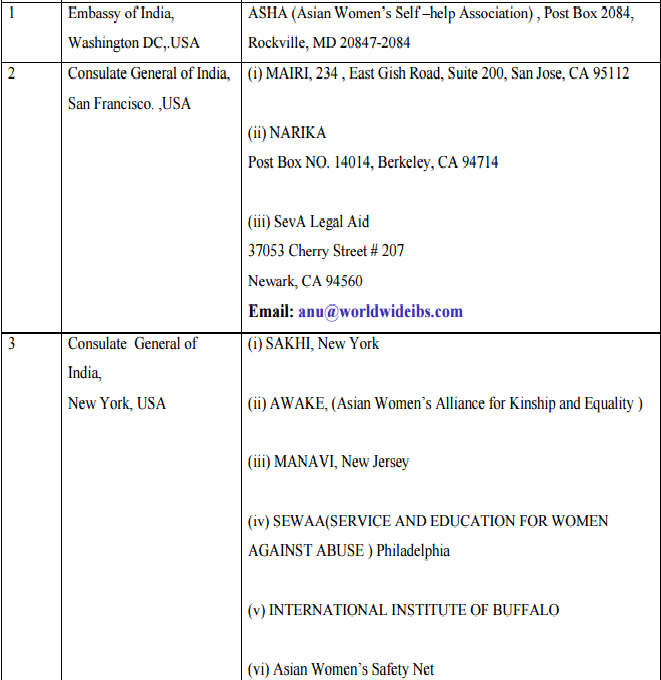 Is there any provision of cancellation of passport

Rajiv Dayal v. Union of India & Ors. is another judgment which shows that the wife also has an available remedy under Section 10 of the Passport Act of impounding and/or revocation of the passport of her NRI husband if he failed to respond to the summons by the Indian courts.

NRI and their appearance before the Indian Court

Section 105 of Criminal Procedure Code (Cr.P.C.) provides for reciprocal armaments to be made by Central Government with the foreign governments about the service of summons/warrants/ judicial processes.

Process of service of summons outside India

The Court also refused to influence its decision with the divorce decree from the US court produced by the husband since in any case the FIR had been lodged by the wife before the UC court’s decree.