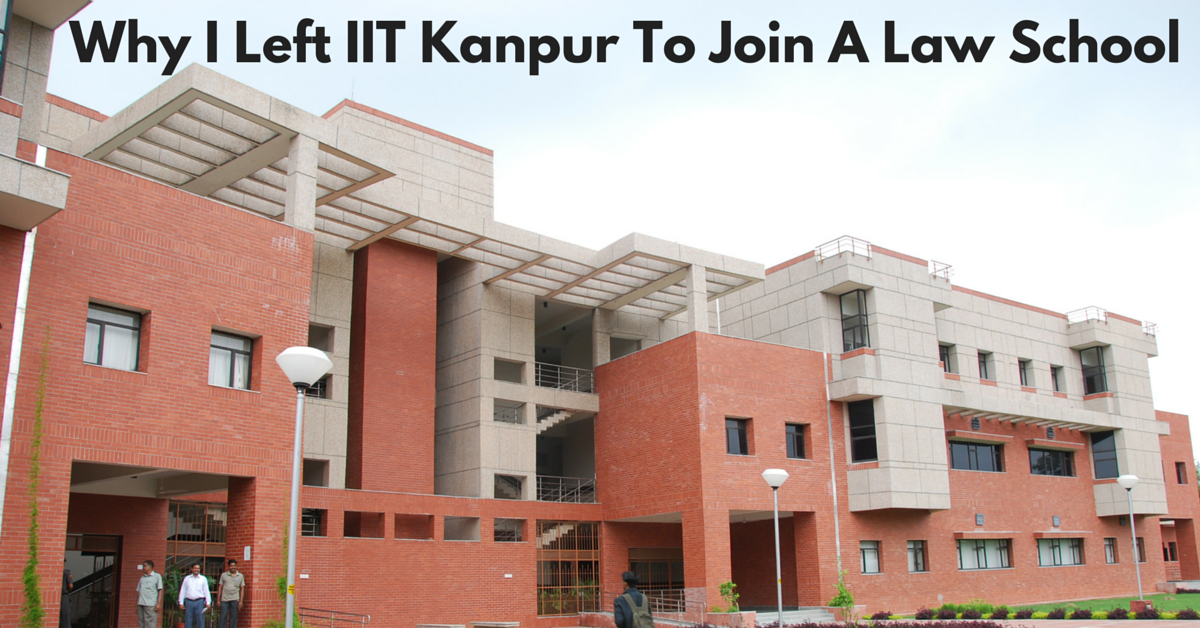 This article is being republished from A First Taste of Law Archives. Utkarsh Agarwal joined IIT Kanpur, dream come true for most students in India. He was also on track to change his stream and get into IT which is every IIT students first choice. However, all of a sudden he dropped out of IIT wrote CLAT and then joined NUJS Kolkata – a top law school. Why would someone do that? Utkarsh tells a fascinating story in this blog post. Over to him.

In India, there are IITs and non-IITs. IITs are where brilliant minds of a generation are trained to create the future.

Students from these IITs are destined to be CEOs and scientists i.e. the outliers. Once you graduate from IIT, you cannot not be successful. IIT, in India, means the difference between an ordinary student and an extraordinary student.

For several decades, IITs were the only institutions in India to receive global recognition. Indian Engineers unlike Indian architects or Indian doctors were the vanguard of their field. The Indian Government intended to preserve this brilliance. Money was therefore poured into IITs. Armed with huge campuses, the best research infrastructure and tons of subsidies, IITs continued to bloom. Unlike any other college in India, IIT had no rules regarding attendance, accommodation, or even examination. Further, most IITs had their own post office, bank and railway reservation counter. Students in the IITs, popularly known as IITians, were special. Even today, they are, even to the most cynical observer, elite.

I joined IIT Kanpur as a student of Bachelor’s in Chemistry.

I had no interest in the subject and like most of my batchmates, was vying to change my branch to Computer Science. Three months into complex models of ketones, life became intolerable. So, I left and went back home. Soon, a plethora of people made it known to me that I should, in their opinion, go back and continue.

A year later, I had my head buried into Winfield trying to make sense of ‘Vicarious Liability’ preparing for a torts paper at the West Bengal National University of Juridical Sciences, one of India’s top law school. The question here is not simply why I quit IIT rather but what made me leave an elite IITian group and along with it, the promise of success.

It wasn’t the fabled overwhelming desire towards a subject, which I had never studied before or an unfounded passion for philanthropy, which I had never fostered before that time, that drove me to Law. Unfortunately, I have never felt Law be my true calling and unlike the Lawyer in the Monk Who Sold His Ferrari, I still very much coveted the success IITs offered. Therefore, taking up Law was clearly neither a passionate nor a spiritual undertaking. In fact, it was many months after I quit IIT that I took up an interest in Law.

IITians were smarter than an average student, however, not everyone studying in IIT was a genius, certainly not me. Setting up a multi-billion dollar company or changing the world by challenging conventions was definitely not on my list when I quit. I had also not put in ten thousand hours in any activity, other than maybe sleeping, that could provide a legitimate excuse for my departure. I was therefore just an ordinary IITian.

It wasn’t even pressure of any kind. I was performing fairly well in my examinations in IIT and at no point did I feel unable to cope with the curriculum. The ragging didn’t get to me and I did not mind living in the cramped up shabby accommodation. I wasn’t even homesick and I did make a lot of friends. I harbored no hate for chemistry and had a good chance of changing my branch to my liking. So, to the best of my recollection, there was no specific incident, which would trigger my departure. Therefore, there was no general psychological reason for the same.

After having debunked the conventional excuses, which one generally professes on leaving an elite institution, I finally figured that leaving IIT Kanpur was an issue specific to me, not as a student but as an individual. Recognizing the reasons behind my departure would, therefore, require of me to have a deep understanding of what being an IITian meant.

IITians are identified as different and special.

IITs were provided with all the resources possible.

They were allotted large amounts of land and hence had huge campuses with all the amenities required inside the campus. Inside the campus, an IITian is hence insulated from the harsh conditions of the outside world. Therefore, IITians are isolated from the world. This also reduces the amount of space they are privy to by restricting their whole life, for four years, to the college campus. Not just space but also the activities and the people IITians interact with on a daily basis are severely limited. Thus, life at IITs is monotonous.

IITians are a valuable resource of our country.

They are supposed to create a better infrastructure, a better economy and thus quicken the development of the country. This is why the Government gives out a lot of subsidies and scholarships to IITians. Thanks to these subsidies and other amenities, IITians are disconnected from the plight of the outer world. Further, the technical education makes it more difficult to find an application in daily life. Therefore, IITians develop apathy towards the normal people outside and dwell in their esoteric groups.

After months of pondering, I have come to the conclusion, the aforementioned consequences of studying in IIT clashed with my very nature. I wanted to preserve my individual identity and did not appreciate being trapped in a college campus for four years with little or no connection to happening of the outside world. Law was, therefore, a calculated choice. It is a profession where the individual skill is of greater importance than the choice of institution. It also requires one to be privy to the major developments in the outside world. Law has a subject matter that constantly changing, it is always new. Further, Law pervades the lives of everyone, unlike engineering which is limited to a specialized group. An ordinary lawyer is, therefore, most connected to the lives of common people than an ordinary Engineer. It was, therefore, the part of me which wanted to be much more relevant to people which made me leave IIT and choose Law.