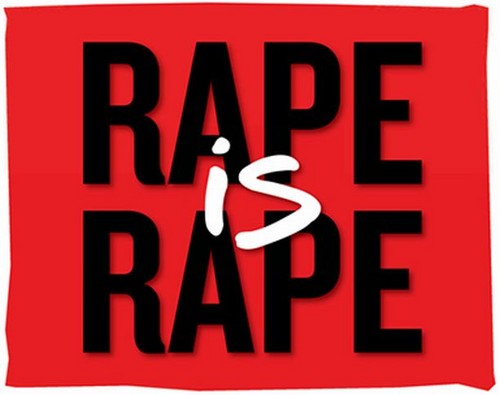 In this article, Shagun Bahl discusses the Legal framework against Marital Rape in India.

MARITAL RAPE – THE WAY AHEAD

Marriage is a state of being united to a person of the opposite sex as husband or a wife in a consensual and contractual relationship recognised by law. It is considered as a sacred thread which binds two individuals in a lifetime of togetherness.

It is obnoxious to put something sacred as marriage and a heinous crime like rape in a single statement. But the reality seems to merge them together in form of marital rapes.

Marital rape is the act of forcible sexual intercourse by one spouse without the consent of the other spouse. Consent is the keyword which changes the marital intercourse to a marital rape. Marriage cannot be considered as the license to a spouse to have a forcible sexual intercourse with the other spouse without spouse consenting to it. The forceful sexual intercourse is an attack on the other spouse who do not wish to be a party of it and marital bonds cannot take away a spouse’s right to have autonomy on their bodies. It is definitely a form of sexual, domestic, psychological abuse on the partner in the marriage as the spouse committing marital rape is disregarding and disrespecting the other spouse’s identity and feelings attached to the forceful act being happened to them. In a marriage, there ought to be mutual respect, space and companionship among the couple and not the suffocation which is attached with forcibly giving absolute physical rights to the respective spouse in the marriage. Marriage should be an extension of a person’s identity and not shackles which forcibly traps them in a suffocated marriage.

MARITAL RAPE: THE ACT OF TRAUMA ON BODY AND MIND

As published in Marital rape – Wikipedia

Rape by a spouse, partner or ex-partner is more often associated with physical violence. A nine-nation study within the European Union found that current or ex-partners were the perpetrators of around 25% of all sexual assaults, and that violence was more common in assaults by ex-partners (50% of the time) and partners (40%) than in assaults by strangers or recent acquaintances (25%).

Rape in itself is such a traumatic experience and if faced by a spouse in a marriage, it can leave an everlasting scar on the spouse’s mind and can humiliate the spouse to such a core that the relationship cannot be fixed with the partner ever after that humiliating sexual experience.  Marital rape can be more traumatising experience than rape by a stranger as in a marital rape as the trust bond between the partners are broken blatantly which is beyond repair. It perpetuates feeling of mental agony, humiliation and hate and contempt against the partner.

It invokes feeling of emotional despair and victimization in a spouse which faces forced sexual intercourse with their spouse and it is not a one time experience which makes it impossible for the spouse to get rid of such feelings to feel normal ever after such experience.

These kinds of rapes such as marital rape is different than other forms of rape and sexual abuse as the victims in these cases feels locked in a cage with their rapist, unlike other rapes in which the victim can separate themselves from their offender and gets time to heal themselves from such traumatic experience. This can prove to be destructive for the spouse mental and emotional state of mind and can aggravate her sufferings with no legal recourse available to her to come out these trappings.

The researchers Finkelhor and Yllö remarked in their 1985 metropolitan Boston area study summed it well for the spouse who faces marital rape.

Behind the closed doors, it is hard to picture the dark reality of marriages in form of marital rapes. The real picture of marriages in society at large is more often seen to carry the burden of high moral expectations out of the married couple rather than addressing the hidden realities of their married life. For addressing these hidden realities behind closed doors, we would first have to ask this question to ourselves that how actually will one prove that he/she is being raped by his/her respective spouse. In order to to get justice in marital rape cases, it is paramount to established before the Courts that the intercourse was forced on the spouse and to substantiate the allegations on strong evidence produced for the same.

Under Section 102 of Indian Evidence Act, the burden of proof lies on that person who would fail if no evidence at all were given on either side. Therefore the burden of proof will lie on the spouse who will allege that he/she is a victim of marital rape. Proving a marital rape is most difficult as practically bringing out the dark reality of one’s married life is next to impossible for the simple reason as to how will anyone prove it the intercourse was so brutal tantamounting to “rape” in nature and will society accept it ?

To prove the brutality of intercourse or forced sex by one’s spouse, there are few evidences one can substantiate on –

WHY INDIA IS NOT READY TO CRIMINALIZE MARITAL RAPE?

India is trapped in age-old traditions and the talks in India to criminalize marital rape have almost been stalled from past few decades as Indian mindset is still not ready to accept that marital rape is a crime and as we are so trapped and blind to save the sanctity of marriages that we do not realise those kinds of marriages are already broken and are beyond repair. We as a country are so behind to have this talk that can be deduced from the judgements laid by Honourable Supreme Court the judges who were unable to contemplate on LGBT issue. The answer is same for all these social issues as our Indian mindsets are so rigid in their approach to uphold the Indian tradition system and cultural values that they have shut their eyes and ears and not addressing the real contemporary issues faced by society.

The article published in:

clears the picture on how as a nation we are failing to address marital rape as a crime. For the first time, the Criminal Law (Amendment) Bill of 2013, established a definition of rape within India’s legal code and declared a strict prison sentence to anyone who committed it. Despite its progressive nature, the bill did not criminalize marital rape or assault of any kind.

Section 375 of the Criminal Law (Amendment) Bill of 2013 states that “sexual intercourse or sexual acts by a man with his own wife, the wife not being under fifteen years of age, is not rape.”

Marital rape is among the leading offenses committed to women worldwide. While gathering definitive statistics about marital rape with a small margin of error is difficult, a study conducted by the World Health Organization reports that at least 10 percent but as many as 69 percents of women across the world admit to having been physically assaulted by an intimate male partner.

The rigidity of the Indian legislature and judiciary’s stance on marital rape stems from cultural expectations of the role of women, traditional beliefs about the purpose of sex, and existing laws that fail to acknowledge and criminalize marital rape.

Protection of Women from Domestic Violence Act, 2005 offers civil remedies for crimes against women including marital rape It is absolutely unreasonable to view marital rape as a civil wrong than as a criminal wrong. It is almost like crushing a women’s right in order to force her to live with her rapist.

Criminalizing marital rape or spousal rape seems far from the reality in India as neither the lawmakers of this country nor the Indian judicial systems are prepared to bridge the gap between marital rape and rape as they are both heinous crimes which could scar the victim for all their life.

Marital bonds are considered sacrosanct in India and marriages in India do not thrive on sex. But is this the reality in modern context or just a camouflage in today’s society of marriages. These are some hard hitting realities of this contemporary world in which marital bond is not as sacred as it is considered to be.  There is a pressing need to criminalize marital rape as crime and amend divorce laws of the country by making marital rape as a legal ground to take divorce from an abusive marriage. The criminalization of marital rapes will also have a domino effect on divorce laws in the country as the “marital rape” could also become a ground for the couples to file for divorce like other grounds like cruelty, adultery etc.

Internationally, many progressed nations have criminalized marital law as in civilized societies there is no place for sexual assaults on women whether inside or outside their wedlock. Marital rapes have been criminalized in these societies long ago simply because the marriage as an institution rests on mutual respect and companionship and any sort of forced sexual act on the spouse is great attack on one’s dignity and to the marriage’s union. It cannot be left to be practised in any civilized society with a legal stamp on it. The lawmakers in international countries realising the deterrent effect marital rape has on society decided to put an end to it and have criminalized marital rapes.

The article published in

JUDICIALLY AWAKENING –  WHAT IS THE WAY FORWARD FOR INDIA

The only way forward to criminalize marital rape is to persuade the Courts with principled advocacy through writ petitions under Article 32 of the Indian constitution and Public Interest Litigations (P.I.L.) filed before them to judicially awaken them that the time has come for India to criminalize martial rapes in light of devastating effects it is having in the society and to push the Indian mindset forward while breaking the traditional chains as the other progressed nations have dealt with this social evil. Still, India is far away from criminalizing marital rape but there are hopes to turn this into a living reality by active judicial activism and with the sincere efforts of principled advocacy persuading Honourable Courts to depend on justice to innumerable victims of marital rape in India.