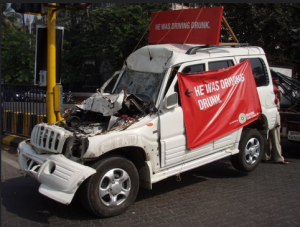 The shocking death of Gopinath Munde, a Union Minister in the Government of India, on account of a road accident, has brought the issue of road safety to the forefront of national public debate. For far too long, road accidents in India have been discarded as one-off incidents that are completely unrelated to each other and have no common underlying causes. To say that India has one of the worst road-safety records in the world would be a huge understatement.Studies have shown that there is a likelihood of a road accident every minute and a fatality every 4 minutes in India. Moreover, as many as 137,000 people died in road accidents in India last year. As the then Minister of State for Road Transport and Highways, Sarvey Sathyanarayana, noted in a written reply to the Lok Sabha last year, the intake of alcohol by drivers is inextricably intertwined with the rapid rise in road accidents in the country.

As a matter of fact, intake of alcohol by drivers resulted in 24,655 road accidents and 10,553 fatalities in 2011.
Alcohol consumption has several deleterious effects on an individual’s driving ability as it leads to increased reaction time by lowering the level of concentration and makes it difficult for a driver to think clearly due to reduced visual and auditory acuity.

Section 185 of the Motor Vehicles Act, 1988 delineates the punishment that is to be handed down to motor vehicle drivers who are found to have consumed more alcohol than the prescribed limit. It is worth noting that the legal threshold below which it is alright to consume alcohol is 0.03% or 30 mg per 100 ml of blood. In other words, no legal action can be taken against a driver whose blood alcohol content (BAC) is lower than this limit. However, if the blood alcohol content is found to be greater than 30 mg, he can be imprisoned for a period which may extend up to 6 months or a fine not exceeding Rs. 2,000 or both for the first offence. If the same offence is repeated within a period of 3 years, the offender can be imprisoned for a term not exceeding 2 years or asked to pay a fine not exceeding Rs. 3,000 or both.

The 3 most widely used methods for detecting blood alcohol content are breath, blood and urine tests. It is dismaying to note that, in India, the blood alcohol content is measured by the police exclusively with the help of a breathalyzer – a device which is designed specially to detect the level of alcohol in the blood by taking a breath sample. This can often be an unreliable method, so it is essential to conduct multiple tests to attain the best possible result. However, as this article in the Times of India notes, police officers in India generally only rely on the breath test which sometimes leads to inconclusive results.

The problem of drunk driving is very rampant in the Indian society due to several interesting reasons that stem from the socio-cultural milieu of our society.

This argument also finds support in the statistics pertaining to drunk driving which can be found here . The statistics show that in the first 8 months of 2013, only 2,873 i.e. 14% of the 19,468 individuals who were caught for drunk driving in Delhi were actually imprisoned.

In March 2012, the UPA Union Cabinet approved an amendment to the Motor Vehicles Act that provided for a greater penalty on persons held guilty for drunk driving. As per the amendment, an offender could be imprisoned for up to 4 years or asked to pay a fine of up to Rs. 10,000. The amendment stated that the amount of punishment was to be determined in accordance with the level of alcohol in the blood. For example, for 30-60 mg of alcohol, the punishment was to be 6 months of imprisonment or a fine of Rs. 2,000/-. For 60-150 mg of alcohol, the punishment was to be doubled and so on. However, the amount of attention that is accorded to road safety in India can be determined from the fact that the government did not make a concerted effort to obtain parliamentary approval for the amendment which is why this forward-looking measure could never see the light of day.

In light of the sharp increase in road accidents on account of drunk driving, it is essential for lawmakers to make suitable amendments to the MV Act that would not only tighten the noose around repeat offenders but would also deter the public from consuming alcohol before driving. As this article indicates, the new NDA government is planning to revamp the existing Motor Vehicles Act.

Let’s hope the amendments contain strong provisions for grappling with the problem of drunk driving.
It must be remembered that laws remain dead words if they are not properly implemented. Therefore, law enforcement agencies must start using modern techniques for detecting alcohol levels in the blood and must take it upon themselves to clamp down on repeat offenders in the harshest possible manner. Similarly, car owners and manufacturers must figure out more effective ways of curbing this menace. Car manufacturers can learn a lot from Skoda’s recent “You drink, we drive” campaign wherein the company agreed to deploy chauffeurs for customers who wanted someone to drive them home after consuming alcohol.