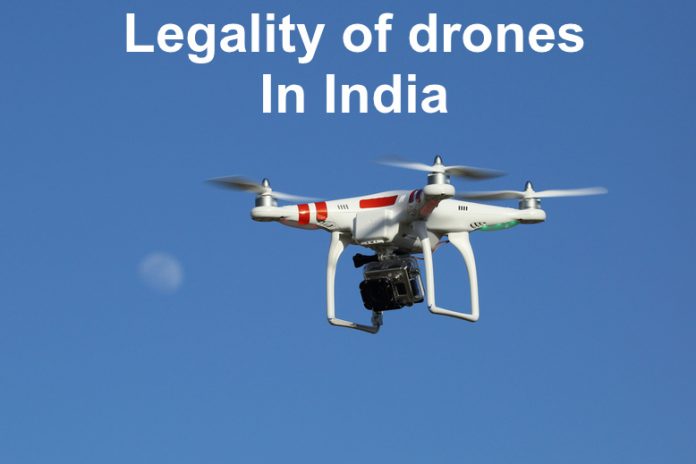 Nowadays it is very common to see drones capturing images at a wedding or a cricket match. Drones are readily available over the internet shopping platforms. Did you know that flying drones without a license is illegal in India? Let us take a look at the game of drones and legality of drones in India.

What is a drone, anyway

Drones are unmanned aircraft that can fly autonomously without a human in control. Furthermore, drones can be defined as aircraft without pilots on board, whose flight (speed, navigation, aerobatics, etc.) are controlled by onboard computers that are in turn directed by remote human operators.

Is flying drone legal in India

By the public notice issued on 7.10.2014, the DGCA (Director General of Civil Aviation) has prohibited the launch of any UAV (Unmanned Aerial Vehicle) by any non-governmental agency or any individual. Therefore, yes flying of drones without prior approval from the governmental authorities is illegal in India.

Further, Press Note No. 3 (2014) released by the Department of Industry Policy & Promotion, Ministry of Commerce and Industry laid down a list of electronic aerospace and defense equipment which required an industrial license for manufacturing/production. This includes UAVs or commonly referred to as drones. [1]

The use of drones was mainly for military or defense purposes. Since gradually the purpose of its use shifted and drones were used for commercial purposes, the government saw a security threat from these UAVs thereby banning their flight without approval.

Regulations regarding flying of drones in India

The Aircraft Act, 1934 defines “aircraft” as any machine which can derive support in the atmosphere from reactions of the air, [other than reactions of the air against the earth’s surface] and includes balloons, whether fixed or free, airships, kites, gliders and flying machines.

This definition is broad enough to include unmanned aircraft. As per the Aircraft Rules, 1937, the DGCA has the power to issue notices to Aircraft Owners, issue particular directions relating to the operation, use, possession, maintenance or navigation of aircraft flying in or over India or of aircraft registered in India.

Rule 30 of the Aircraft Rules strictly states that it shall be the central government which will grant the certificate of registration to an aircraft. An aircraft also includes Unmanned Aerial Vehicles, Unmanned Free Balloons, and Remotely Piloted Aircraft. Therefore, drones also need to get registered under the following guidelines.

Rule 31 to 37A further describe the legislation about registration of aircraft, its cancellation and change of ownership, the Nationality and Registration Marks and the manner in which they are to be affixed.

Here is the Application for registration of aircraft.

How flying a drone can land you into trouble

Suppose one Sunday evening you decide to test your drone’s flying capability. Meanwhile, in the middle of the flight, the drone ran out of battery. What will happen in such circumstances? What if a person uses a drone to film others without their will? What are the legal intricacies involving such cases?

Section 287 of the IPC talks of “Negligent conduct on machinery.” When anyone uses any machine in a rash or negligent manner which endangers human life, they will be held liable for, “Negligent conduct with respect to machinery.” This section will be applicable in situations where a person if flying a drone and there occurs a technical failure because of which the drone crashes, thus causing risk to others. The punishment under this section is an imprisonment for six months with a fine of INR 1000.

Section 336 of the IPC talks of “Act endangering life or personal safety of others”. Whoever does any act so rashly or negligently as to endanger human life or the personal safety of others, shall be punished with impris­onment of either description for a term which may extend to three months, or with fine which may extend to two hundred and fifty rupees, or with both. [3]

Section 268 pf the IPC talks of “Public Nuisance.” A person is guilty of a public nuisance who does any act or is guilty of an illegal omission which causes any common injury, danger or annoyance to the public or to the people in general who dwell or occupy property in the vicinity, or which must necessarily cause injury, obstruction, danger or annoyance to persons who may have occasion to use any public right.

A drone might cause hurt, as defined under section 319 of the IPC. “Whoever causes bodily pain, disease or infirmity to any person is said to cause hurt.”

Along with these offenses, there is a high chance of criminal trespass as well as breach of privacy of a person. Drones with a camera can be used to film people against their will or even bug them thereby causing a breach of their privacy.

Can a regular RC-helicopter fit under the definition of UAV

The press release by the DGCA banned the flight of every non-governmental private UAV. By this ban, can we assume that a flight of a regular toy helicopter is also banned under the said press note?

UAV is an aircraft without a human pilot aboard. UAVs are a component of an unmanned aircraft system (UAS); which include a UAV, a ground-based controller, and a system of communications between the two. By this definition of UAV, one can assume that an RC helicopter satisfies the definition of UAV. However, there is no settled law or judicial pronouncement on this, and this proposition is open for interpretations.

Legality of selling drones at online platforms in India.

Although flying of drones without permission is illegal in India, its selling is not. Drones are easily available at online platforms at a very low price. An impressive figure tells India is the highest seller of drones in the world. There is no settled law which regulates the selling of drones at an online platform in spite its flying is prohibited!

Furthermore, Amazon, one of the leading e-commerce websites, has applied for a patent for its delivery system drone that delivers products to the customer’s doorstep within 30 minutes of the order. Also, Boeing obtained a patent for its “flying submarine” drone which is adaptable for both flight and water travel.

Can drones be used for filming or for photographic purposes

Ever since drones came into photography, it has changed the entire dimension of it. It has opened up a new vertical in the photo industry. But with the ambiguity about permission, no photographer is ready to use their expensive drones. Four people were arrested in Varanasi for filming Ganga aarti through drone cameras at the Dashashwamedha Ghat without permission in 2014. As per the guidelines of DGCA, civilians drones are not allowed to take off in any manner whatsoever.

Regulations relating to importing of drones in India

Did the article help you in understanding the legality of drones in India?. Comment below and let us know and do not forget to share this with your friends and family.

[2]Future of drones, can they be legitimized, Nishith Desai Associates.