This article is written by Ashpreet Kaur, IInd year student, B.B.A. LL.B, Symbiosis Law School, NOIDA. In this article, the author discusses the essentials and structure of a legally enforceable contract and how it is different agreements.

In a developing country like India, where the economy is growing day by day, and the government is introducing schemes such as Make in India, Start-up India and Mudra Yojana, with the sole purpose of promoting business and nurturing entrepreneurs, contract law is underpinning our economy. Nearly every transaction involves a contract; for instance, purchase of raw materials, lease of premises, hiring equipment, selling products or services, and using banking and related services to make or receive payments. Similarly, most dealings with consumers comprise the purchase of goods or services backed by a contract. For businesses, it is difficult to think of many transactions entered into by consumers that are not of this nature.

The notion of contract, be it oral or written, which unpins the whole economy needs to be regulated by the government of every country. In India, contracts are controlled by the statue commonly known as “Indian Contract Act, 1872“. The essence of the Indian Contract Act lies in two terms, namely agreement and contract, the whole contract act revolves around these two terms, for instance, how contract and agreement are different from each other, contingent contract, performance and breach of contract and so on and so forth.

In order to understand these two steps, this article will cover the following sections-

Formation of a contract

The easiest way to understand the formation of a contract is to get the picture of the chain of events that lead to the contract.

Firstly, there should be an offer/proposal as specified in section 2(a) of Indian Contract Act, in which one person communicates the willingness for an act or abstinence for the purpose of obtaining the other party’s assent and in return asks for some act or abstinence that is done by another party (consideration), here with the intention of the offeror and communication to the other party is a crucial factor.

Secondly, when another party communicates the acceptance of that particular offer/proposal, it becomes a promise, as acknowledged under section 2(b) of the Indian Contract Act. From this point onwards the person making the proposal is called “promisor” and person accepting the proposal is called “promisee” [section 2(c)]. When the promisor asks for an act or abstinence to be performed by the promisee, that act or abstinence is contemplated as consideration, according to section 2(d) of the Indian Contract Act. If there is a lack of consideration in any promise, they cannot be considered as agreements as they are done gratuitously.

Thirdly, when an offer is accepted with sufficient consideration from both sides, it becomes an agreement, as aptly defined under section 2(e) of the Indian Contract Act.

Fourth and the last step defines the term contract under section 2(h) of the Indian Contract Act, any agreement if enforceable by law converts into a contract. This sub-section aptly defines that “why every agreement cannot be considered as a contract”. Under any circumstance, if there is a lack of legal obligation in an agreement, there can be no contract. Therefore, agreements cover more ambit than contracts because they can be of moral, immoral, religious or social nature because one or more essentials of the contract stated under section 10 are not fulfilled.

Indian Contract Act, Section 2(h) just adds a phrase “enforceable by law” in the word “agreement”, but the magnitude of this phrase is contemplated in 20 sections ranging from sections 10 to 30. Section 10 lays down certain essentials which are further elaborated one by one with their respective sections:

Parties should be competent to contract

According to the first essential of contract and section 11 of Indian Contract Act any sound minded person who has crossed the age of majority and is not prohibited by law to which they are subject, are competent to contract. The age of majority is normally 18 years, except in the case of guardianship, which is 21 years, if a minor enters into an agreement no liability will arise upon him under any circumstances and the agreement is absolutely void as held in the case of Mohri Bibee v. Damodaran Ghosh.

Nevertheless, a minor can enter into a contract of necessity, with the definition of necessity being case specific. But if the minor has misrepresented himself as a major and acquired something, if that thing is traceable it should be returned to its rightful owner this is called the Doctrine of Restitution. Apart from this, a person at the time of entering into a contract should not be a lunatic or drunk or of unsound mind, should be capable of understanding and forming a rational judgment as defined under section 12 of Indian Contract Act.

Under section 15, consent is said to cause by coercion, if a person is committing or threatening to commit, any act, forbidden by IPC or detain any property.

Under section 16, if any person enters into a contract where the other is in the position to dominate and uses that position, then a contract is voidable at the will of the person in an inferior position. When there is a situation of mental distress or both the parties have a fiduciary relationship or there is a real or apparent authority, the dominance of one party over the automatically arises.

Moving on to section 18 misrepresentation, it arises when there is any breach of duty or any party has passed an unwarranted statement i.e. which he/she believes to be true but in fact, it is not true or any mistake related to subject matter also comes under the ambit of this section. If under any contract, misrepresentation has happened, then it is voidable on behalf of another party.

As explained in the case of Prakashwati Jain v. Punjab state industrial development corporation AIR 2012 P&H 13, consideration is quid pro quo, which means that something of value receives by both the parties as to the inducement of a promise or a price of the promise aptly paid in return.

According to section 2(d), when promisee does an act or abstinence as required by the promisor, then that act or abstinence is called consideration. Herein, it is not important that the value should be adequate, it entirely depends upon the parties, whatever they like at the time of entering into the contract.

Normally, the contracts entered into without consideration are considered as void, except under the circumstances defined under section 25, which says that, a promise to pay time-barred debt governed by limitation law or promise to pay someone who has already volunteered a service in the past or it is communicated in writing and is made out of love and affection of close relationship, does not need a consideration to make an agreement enforceable by law.

The object should be lawful

Every agreement is rendered void if the consideration or object is forbidden by law or defeats any law if allowed or is of fraudulent nature or injurious to any person or property or is of immoral nature which defeats the public policy. Under section 23 the word object is different from consideration, herein object being the main purpose of doing that particular for instance, when a loan is taken for a bribe here the purpose is illegal i.e. giving bribe and consideration is money.

To elaborate, the agreement which is declared to be void as their object or consideration was not lawful as contemplated under section 23, we need to study section enumerated 25, 26, 27, 28, 29 and 30. Section 24 states that if a particular part of an object or consideration is unlawful and is separable, then the whole contract would not be considered as void under the condition that separable part should be removed, as held in the case of Alice Mary Hill v. William Clarke ILR (1905) 27 All 266.

Apart from the minor, if any person is restrained, to marry any person if his/her choice, by any agreement, then that agreement is declared as void under section 26, but this section does not cover widow remarriage. Apart from this if an individual enters into an agreement which restrains, be it absolute or partial, him/her in exercising a lawful profession, trade or business except when restraint is statutory or judicial or the goodwill of a business is sold or some special circumstance, then that agreement is rendered void under section 27.

But in the case of legal proceedings, partial restraint is valid and absolute restraint is void unlike restraint of trade. Under section 28 if any agreement apart from arbitration and right to appeal, absolutely discharges any party from their right to approach court is considered as void. When under, any agreement the meaning or purpose is not clearly stated like undefined property, not stating specification of goods purchased, agreement to agree in the future etc, such agreements are void under section 29.

Contrarily, when the meaning or purpose is clear, but it is not certain that particular event is going to happen or not, and happening of that particular event depends upon the luck or faith. There should be an equal chance of gain or loss to both the parties and there no personal interest of both parties should be there. When all these conditions are satisfied, then only the agreement becomes wagering agreement under section 30 and is rendered void, except skilled competitions and a horse race where the prize is Rs 500/- or above.

After understanding the intricacies of a contract and the elements which lead to the genesis of contract, we can address the question of the legality of the contract, aptly. This can be answered and analyzed in one line that section 2(h) which says that when an agreement is backed up by law it converts into a contract.

This section appropriately distinguishes between the two situations in that statement. In layman’s term, for the making of a contract, there should be an agreement this is first most essential which indicates that each and every contract had been an agreement first.

Secondly agreement has to be backed up by law for making of a contract, this backing up by law is the extra step for conversion of agreement to contract and when this step (section 10-30) is not followed deliberately or is omitted by mistake, then the agreement remains an agreement and parties to contract cannot sue each other in case of breach.

In essence, an agreement is the foundation of a contract and contract is the building constructed on these foundations. An agreement begins from an offer and finishes on consideration, whereas a contract has to cover other signposts that are enforceability. This is the reason why no legal remedy arises in breach of an agreement, meanwhile, breach of contract endows legal remedy for the aggrieved party against the guilty party. Accordingly, we can say that all contracts are agreements but all agreements are not contracts. 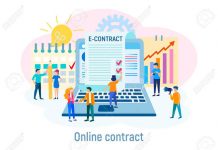