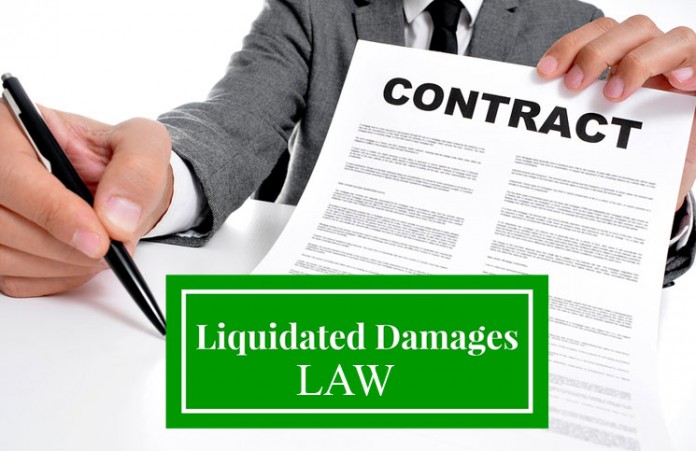 As per the black’s law dictionary damages means any monetary claim by, or ordered to be paid to a person as a compensation for any loss or injury incurred by them. In Indian Contract Act, damages are referred in terms of breach of contract, when a party fails to perform the terms of the contract to which he is obligated, then that party has to provide compensation to the other party who has incurred the loss. The main purpose of compensation is to restore the position of the injured or aggrieved party to the economic position it would have been if the contract was not breached. Damages are further divided into general damages and special damages.

General damages deal with those which have aroused naturally in the usual course of breach. Special damages refer to damages incurred under unusual circumstances and  cannot be recovered unless special circumstances are brought to the knowledge of the other party.

As per black law dictionary liquidated damages means, “an amount contractually stipulated as a reasonable estimation of actual damages to be recovered by one party if the other party breaches the contract”.  In layman’s language, before entering into a contract the party stipulates a sum of money which has to be paid by the one who has breached the contract to the other party who has been aggrieved and this sum of money has been termed as liquidated damages.

In India, liquidated damages are dealt under Indian Contract Act, 1872 within section 73 and section 74. Sec. 73 states that  “when a contract has been broken, the aggrieved party is entitled to get compensation or any loss or damages which has been inflicted to him/her naturally during the usual course of breach of contract or about which the parties to the contract has prior knowledge when they entered the contract .”

Sec 74 states “When a contract has been broken,  and if a sum is named in the contract as the amount to be paid for such breach, or if the contract contains any other stipulation by way of penalty, the party complaining of the breach is entitled, whether or not actual damage or loss is proved to have been caused thereby, to receive from the party who has broken the contract reasonable compensation not exceeding the amount so named or, as the case may be, the penalty stipulated for”.

When the provision is read it implies that in Indian laws there is no distinguish between the liquidated damages and the penalty, as has been done in U.K. and USA. The word penalty was introduced in Indian Contract Act by way of amendment in 1899.

Earlier the provisions which were followed while differentiating the penalty and liquidated damages was based on the differentiation established by British law which stated that the aggrieved party will not be entitled to of any excess of actual loss, if the sum was not a genuine pre-determined or pre-estimated and therefore it would amount to penalty. Under the common law, method used to stipulate an liquidated damages was through a genuine pre-estimate of damages by mutual agreement. Also under English law, the aggrieved part can claim damages without any actual damage or when the damage is less than the stipulated amount.

Also under the English law, to a breach of contract is the amount of damage is determined by a court as a penalty then it is irrecoverable whereas if it has been determined as liquidated damages it can be recovered.

Difference between penalty and liquidated damages

Penalty is something which is used in a contract to secure the performance of the contract whose main purpose is to ensure the payment of money which is specified to terrorise the offending party. Also where the loss which has to be recovered is greater than the pre-estimated loss then it amounts to penalty. Whereas liquidated damages are compensatory in nature at the same time are pre-estimated damages. The purpose liquidated damages is to promote certainty especially in commercial field.

Liquidated damages are based on the genuine pre-estimate of the loss, whereas penalty is based on the doctrine of reasonable compensation.

Also Sec.73 lays down the principles for damages pertaining to difference between the cost and price of the goods and services at the time of the contract and the time when the contract was breached.

It is court’s duty to determine whether the case in hand involves liquidated damages or penalty, by determining the facts of the case. Apart from it the court has to look into

Initially in the case of Fateh Chand v. Bal Kishan Das[1], it mainly eliminated the refinement under English Law in relation to the difference between the payment of liquidated damages and stipulation of penalty.  The S.C in this case stated that the aggrieved party is entitled to a reasonable compensation which should not exceed the sum of penalty or the pre-determined amount which have to be paid after the breach of contract. The court also stated that the application of these provisions is not confined to the cases where the aggrieved party approaches the court only for relief. In this case, the Court interpreted Sec.74 as a legal liability in the case of breach of contract, whether either through pre-determined agreement compensation is paid or through penalty. The main purpose of fixing a pre-determined amount and its benefits were discussed by the court:

In this case Court while discussing the scope of Sec.74 stated that it deals with damages which are divided into two classes of cases:

In the case of Oil & Natural Gas Commission v. saw Pipes Ltd[2], where the S.C. held that in case of damage sec.73 and sec.74 has to be read together and liquidated damages can be granted in those cases where it is difficult to prove the actual loss or damages which have been incurred provided that it should be reasonable compensation. In the course of deciding compensation in such cases the terms and conditions should be taken into consideration.

In the case of BSNL v. Reliance[4], where there was a dispute was relating to the Caller Line Identification device, and as was recovered that the calls of CLI has been manipulated which invoked method of computing charges and hence resulted in BSNL, levying a charge of Rs. 9.89 cr. on Reliance. The same maxim that is the use of pre-determination or pre-estimation genuine loss as the best indicator of reasonable compensation which was used in the case of Fateh Chand, the court made observation in relation to Sec.74 that the damages to be provided should be based on the concept of reasonable compensation apart from it court also stated that it is of no importance in characterising the damage as penalty or as a requisite.

In this case the court also stated that the “liquidated damages serve the purpose of avoiding litigation which is very useful and promotes certainty in commercial cases”.

The judgement in the case of Kailash Nath Associates v. DDA[5],  new perspective of Sec.74 was discussed,where the Court declared that under Sec.74, in case of breach of contract the party will be entitled to damages in form of reasonable compensation which must not exceed the sum which has been pre-determined in the contract. The question which was determined in this case was whether forfeiture is barred under Sec.74, where as in the common law penalty rule is basically not applied in the case of forfeiture. Before the amendment of 1899 all Indian cases follow the common law perspective, but the amendment broadened the purview of Sec.74. The amendment inserted the  clause “any other stipulation by way of penalty” in Sec.74, which was first addressed in the case of Fateh Chand v. Bal Kishan Das. In the present case of Kailash Nath, the apex court held that Sec.74 does not extend to the jurisdiction of granting relief in cases of penalty when the provision of the section does not apply in terms. Where in earlier cases the court stated that Sec.74 extends to those cases where there are unavoidable circumstances.

Hence, liquidated damages are easy to impose when compared with penalty. Also penalty can be imposed on limited events like delay in completion of the work or when there is delay in supply. Also in Indian Contract Act, there is no specific differentiation in relation to liquidated damages and penalty. Apart from it there are still questions in relation to Sec.74 which has to be clarified.