This article is written by Aayushman Jauhari, pursuing a Certificate Course in Introduction to Legal Drafting: Contracts, Petitions, Opinions & Articles from LawSikho.com.

What is a licensing agreement?

The term “License” is defined under Section 52 of the Indian Easement Act, 1882 as “Where one person grants to another, or to a definite number of other persons, a right to do, or continue to do, in or upon the immovable property of the grantor, something which would, in the absence of such right, be unlawful and such right does not amount to an easement or an interest in the property, the right is called a license.”

And the term “Agreement” is defined under Section 2(e) of the Indian Contract Act, 1872 as “Every promise and every set of promises, forming consideration for each other is an agreement.” And an agreement enforceable by law is a contract.

Thus, a Licensing Agreement is a written contract between two parties (Licensor and Licensee), where one party (Licensor) gives permission or license to use its property/intellectual property/brand name or trademark/patent technology to the other party(licensee) under a specific set of terms and conditions.

Elements of a standard licensing agreement

Checklist items for a licensing agreement

The proof-reader should check the following points and must ensure that:

Non-exclusive Licensing Agreement– In this type of agreement licensor can grant license of the licensed property to any number of licensees and can also use the licensed property during the tenure of the agreement. For example, suppose a pharmaceutical company X discovered medicine for coronavirus and gets its patent. Now the company wants to sell that patent medicine in the entire world to earn profit by saving people from losing their lives. Then, in such case, the company will enter into the non-exclusive license agreement where it can grant a license to sell its corona medicine to any number of individuals, who are interested in selling that medicine.

Co-exclusive Licensing Agreement– This type of agreement allows more than one licensee to use and exploit the licensed property, but this time the number of licensees is limited and their number is fixed at the time of entering into the agreement. For example, X is a watch company that grants licenses to companies A, B and C only to sell its patent watches on their online platforms. In this example, since the number of licensees are fixed and are limited to 3, it is a good example of a co-exclusive license agreement.

Sole Licensing Agreement– This type of agreement is very similar to an exclusive licensing agreement but the only difference is that here licensor has the right to use the licensed property during the tenure of the agreement. For example, suppose Mr X is a wholesaler of rice, who has a warehouse in Ghaziabad. The warehouse is large enough that at most about 50% of its space is utilized by Mr X for storing his rice. In order to have optimum usage of warehouse space and to earn some profit, Mr X entered into a licensing agreement with Mr Y who is the wholesaler of pulses. Through this agreement, Mr X (licensor) grants the license to Mr Y (licensee) to use the warehouse (licensed property) in exchange of Rs. 25,000/- as consideration. However, it is specifically mentioned that the licensor has the right to use the licensed property during the term of the agreement.

Since in this example only licensor and licensee are only allowed to use the licensed property, the agreement executed is a sole licensing agreement.

Issues covered by the licensing agreement

Consequences of not making a licensing agreement

Executing the licensing agreement helps the parties to develop an understanding of how to use and approach the licensed property. However, without it, parties become directionless. They waste their precious time, money and energy finding access to the appropriate source to achieve their business goals. However, this only leads to frustration and the ultimate conclusion is that parties failed to achieve their desired goals.

Let’s take an example to answer this question. Suppose you are a toy car manufacturer. If you manufacture a car having a basic design, its sale will likely be less. However, if you manufacture a replica of a luxury car, its sales will definitely be more. Thus, here licensing agreement helps the licensee to get the license or the right to use the patent luxury car design and thus, promote its sales. On the other hand, it helps the licensor to earn profit by allowing the licensee to use its patent design. In this way licensing agreement is used.

End-User Licensing Agreement (EULA) is a contract between a software developer and the user of that software. Since EULA is a contract, it is governed by the provisions of the Indian Contract Act, 1872. The term “End User” in EULA denotes that these agreements are non-transferable. These agreements are made to serve the following purposes:

How can a person create a license agreement?

The steps for making the licensing agreement are as follows: 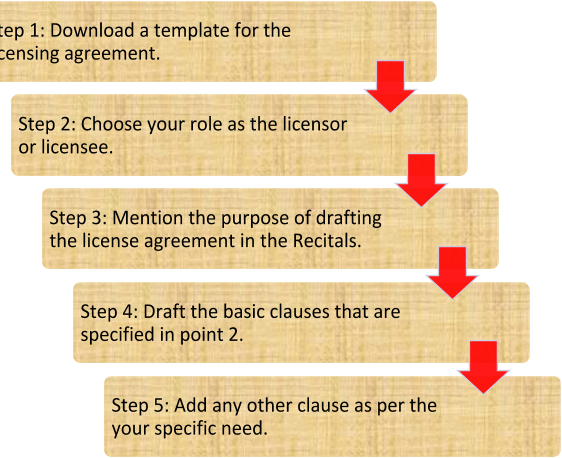 Licensing Agreement has a large scope in Intellectual Property (IP) industry, especially in copyright, patent and trade-marks licenses. It helps in promoting the sales of products and to yield a large return on investment by enabling optimum utilization of licensed property. Thus, a basic knowledge of licensing agreement is important for everyone, especially businessmen, law students and advocates.