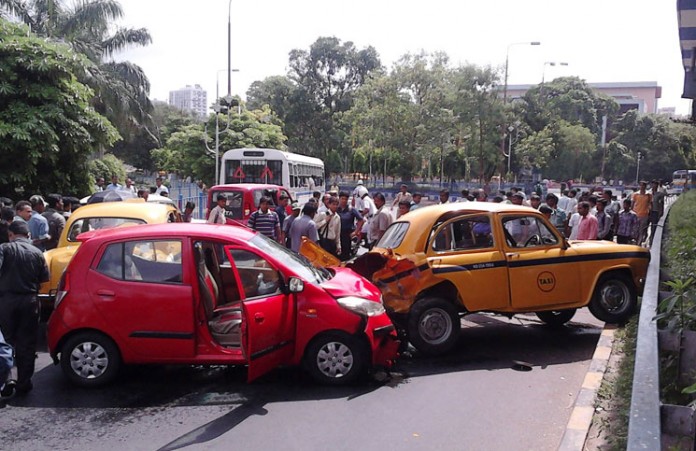 This article is written by Prashant Singh,  a student of Campus Law Center, University of Delhi. He explains how and when to file claims with the motor accidents claim tribunal.

In present times, the role of transportation, be it public or private, has become essential for our social interactions and commercial transactions. Transportation is getting technologically more advanced every other day. There is a huge expansion in use of motor vehicles, be it for the purpose of businesses or for private purposes.

Even with the advancement of technology we have to deal with untoward incidents of road accidents. Some of the reasons for road accidents are-overspeeding, drunken driving, distractions to driver like smartphones, non-adherence to traffic rules, overtaking in wrong manner and jumping the red light.

Every other day there is an increase in number of vehicles on the road across India. For Example-According to Economic Survey of Delhi-‘ The total number of motor vehicles on road in Delhi as on 31st March, 2015 touched the 88.27 lakh, showing an increase of 6.4 per cent over previous year.’1 With such large number Vehicles in the city one can imagine that there is large probability of occurrence of motor vehicle accidents in some form or the other. Although there has been a decrease in number of road accidents in Delhi city-Thanks to Delhi Metro which provides an alternative to commuters and thanks to strict(sometimes aggressive) implementation of traffic rules.2

Now if someone unfortunately meets an accident then what are the remedies available to the injured victim by the law? There is a remedy i.e. the Right to Compensation under Motor Vehicles Act, 1988.

Let us briefly familiarize ourselves with the various aspects of Indian law dealing with claims in relation to accidents by motor vehicles (primarily Motor Vehicles Act,1988).

(c) is qualified for appointment as a High Court Judge or as a District Judge.’ 8

When can compensation be claimed

Limitation-There is no time limit for filing motor vehicle accidents claim. But an unusual delay will demand an explanation by the Tribunal.

According to Section 165 of the Motor Vehicles Act,1988 – ‘claims for compensation in respect of accidents involving the death of, or bodily injury to, persons arising out of the use of motor vehicles, or damages to any property of a third party so arising, or both.’5

In other words, the Tribunal can adjudicate upon claims for compensation –

Who can claim the Compensation

According to Section 166 of the Motor Vehicles Act,1988 6 ,compensation can be claimed  –

How and Where can compensation be claimed

Claim Petition can be filed –

Insurance has been made compulsory and non-compliance with Section 146 has been made punishable with imprisonment, or fine, or both(Section 196).Primary object of compulsory insurance of motor vehicle is for the benefit and monetary security of the victim.

Chapter X of the Act deal with such cases. It imposes no fault liability on the owner of the motor vehicle. Though such liability arises only in the case of accidents which leads to death or permanent disability of the victim.

‘no fault liability’-Section 140 of the Act lays down the principle of no fault liability. According to this principle the liability of paying compensation is imposed on the owner of the motor vehicles even if no fault exists in relation to the accident being examined by the court.

The term ‘Hit and Run motor accident’ has been defined in Section 161(1)(b)- “hit and run motor accident” means an accident arising out of the use of a motor vehicle or motor vehicles the identity whereof cannot be ascertained in spite of reasonable efforts for the purpose.

Government has created ‘Solatium Fund’11 for the victims of ‘hit and run motor accident case in accordance with Section 163 of the Act.

According to Section 161 the amount of compensation is-

Section 163 – A. Special provisions as to payment of compensation on structured formula basis

* Here Permanent Disablement shall have the same meaning and extent as in the Workmen’s Compensation Act, 1923.(Section 163-A(1)-Explanation)

‘Where a person is entitled to claim compensation under section 140 and section 163-A, he shall file the claim under either of the said sections and not under both.’(Section 163-B)

Occurrence of motor accidents depends on many factors. If we are sincere enough to be careful while driving then we can definitely eradicate any mishap. Traffic management is Government’s job and if we participate in it with compassion and responsibility then we can definitely see better and safe roads for ourselves and for other citizens.