This article has been written by Neha Mallik, from Vivekananda Institute of Professional Studies, affiliated to Guru Gobind Singh Indraprastha University. This article gives an insight into setting-up shooting ranges in India. This article will answer the questions pertaining to licenses, rules, and regulations related to firearms and owning and operating a shooting range.

Everyone knows that shooting as a sport has gained popularity over a period of time and has also become a profitable source of business for many, keeping the controversies aside. If you are considering opening a shooting range you must be aware of the legalities, pros, and cons related to it as well. Shooting sport is exciting but one of the most dangerous sports for which it is subjected to various strict rules and regulations. Any individual dealing with firearms must have a license from an authorized organization and be aware of the laws related to it. The Indian Arms Act,1959 along with Arm Rules 1962 and Arms Rules 2016 prescribe the provisions as to how an individual sets up a shooting range. Before diving straight into the procedures and it’s intricacies, let’s talk about the types of shooting ranges, their advantages, and drawbacks.

Indoor shooting ranges can be built or located in high traffic areas as it is inside the building. The shooters and members do not get disturbed by outside noise and can give full concentration to shooting.

The noise controlled systems are installed inside the shooting range in order to prevent noise pollution.

This is a well-known fact that in an indoor shooting range, the shooters can practice even in harsh weather without any trouble.

As the indoor shooting ranges can be located anywhere and can be built near the society, malls, complexes, it is more convenient to access it, that eventually leads to the promotion of shooting sport and finally increasing profits.

Shooting sports lead to many environmental concerns. One of such is lead contamination. The owners or operators of shooting ranges are required to follow strict guidelines for lead management. Failure of which may lead to the closure of the range or heavy penalty. The indoor shooting range provides for better lead management facilities as compared to the outdoor ranges.

The indoor shooting ranges suffer from ventilation which is why they need high-quality air-filtering systems to keep shooters and members safe. These systems help in preventing lead poisoning.

Space is one of the drawbacks of setting-up an indoor shooting range. Indoor ranges are not suitable for field training or other such activities.

There are multiple restrictions in opening an indoor shooting range as it cannot be set-up anywhere.

The shooters can practice in open grounds with many lanes.

It provides more mobility as the shooter can move freely between the areas.

It provides a realistic environment to the shooters and guests as well which is more engaging and exciting.

These ranges are typically less expensive and environmentally friendly.

Before providing licenses for setting up a shooting range, the authority must have a clear understanding of the objectives that are to be achieved and the benefits that would come from having a shooting range. The primary reasons may include the following reasons:

No doubt, sports can help you achieve your fitness goals and plays an important role in a person’s life. According to research, sport is one of the great ways to improve the lifestyles of people.  Active participation in sports would help the community to be physically fitter, healthier, and also mentally strong. Shooting is one challenging Olympic sport that increases core strength, stamina, self-control, gross-motor skills, and whatnot.

Developing athletes who could qualify to participate in national and international competitions is a priority for sports ministries of almost every country. The authorities usually grant permission to set-up a shooting range if they think that the owner can maintain the international class facilities and provide a place where the athletes can train and compete.

It is a matter of prestige for many cities and nations to host national and international sports competitions and events. The places where such events take place acquires recognition and popularity.

The competitions in shooting sports are subjected to zoning laws that can not take place everywhere. A shooting range that meets all the safety standards provides a venue for competition and also promotes participation of youth. The members can easily compete within themselves and with other shooters across the country.

Owning and operating a shooting range is one of the most profitable business sources in the world. Huge number of participants take part in the national and international sports events which leads to high economic profit to that region.

In order to obtain a license to set up a shooting range, one must be aware of the gun control laws of the local municipality, country, or state. In India, the law on firearms is governed by the Indian Arms Act,1959 which is responsible for the regulation and providing the guidelines for keeping arms and ammunition.

As per the Arms Rule 38, a licence must be granted by the State Governments or  District Magistrate having the local jurisdiction over the area.

The obligation of the licensing authorities to grant the license for the permissible category of arms and ammunition is stated under Rule 20(3) of the Arms Rules, 2016. It states that license would be granted to shooting clubs or a rifle association who wants to pursue sport shooting for target practice in a structured learning process.

It is also stated that application would be considered on the basis of a police report or on the discretion of the licensing authorities.

Further, as per Rule 38, a private shooting range owner must meet the technical and security standards as specified by the Central Government.

Rule 38 also provides that the owner or operator must have adequate financial arrangements to meet any injury or damage claims for the third party insurances or other such requirements.

A regular inspection must be conducted by the National Rifle Association of India or State Sports Authority to ensure that there is strict adherence or the safety standards and other norms. 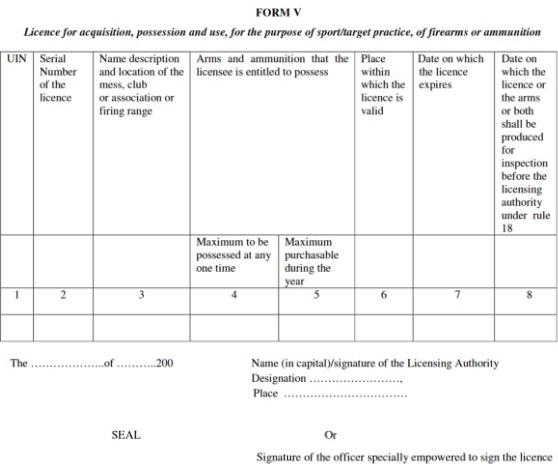 Authorities to grant the license

Before the new Arms Rule came into force, the power to grant of the license was vested by the State Government of the District Magistrate but later, the Central Government is now responsible for the issuing of licenses required to set up the shooting range which is subjected to various terms and conditions and valid only for the specified time period. After the expiry, these licenses need to be renewed by the authorities.

Expiry and renewal of licence

The Arms Act 1959, specifies that the firearms licences will be generally valid for three years, and after the expiry, it should be renewed by either District Magistrate or by the respective State Governments by furnishing the required documents such as:

Provisions regarding suspension or revocation or licence

It must be noted that while suspending the license the licensing authority should record the reasons for doing so unless the authority believes the contrary. Further, the license holder on revocation or suspension of the licence must surrender the licence immediately to the authority and must not conduct any activity in the shooting range.

The process of obtaining a licence to set-up a shooting range is stringent and rigid as it deals with firearms. Having said that an individual intending to open or operate a shooting can get a license easily if he meets the necessary requirements and strictly adheres to all rules and regulations related to it. It must be concluded that India has one of the strictest gun laws in the world. India’s firearms law allows citizens to own and carry guns but ironically, Sometimes it takes years to obtain licences. There are various developments related to gun laws in the recent past that has become a subject of debate.