This article is written by Pearl Narang, pursuing a Diploma in Advanced Contract Drafting, Negotiation and Dispute Resolution from Lawsikho.com. Here she discusses “All You Need to Know about Chit Funds”.

Chit Funds is a kind of investment scheme where people agree to deposit a certain sum of money from time to time in a fund. One of the subscribers of the fund is chosen by drawing a lot. The subscriber who wins the lot will receive the price amount from the fund.

There are 20 members in a particular chit fund. They agree to deposit Rs. 1000 per month. Members will pay 1000 Rupees each. The total value of the fund is 20,000 Rupees. Every month a chit would be drawn and the person who wins the chit will get the 20,000 Rupees.

Section 2(b) of the Chit Funds Act, 1982 gives the definition of chit funds. It states that a chit fund is an agreement in which one person agrees with other contributors to deposit a certain sum of money for a certain duration of time and each contributor shall be entitled to the prize money by way of tender or auction as agreed in the agreement.

Other Names for Chit Funds

Chit funds are known by a number of names.

After the amendment of the Chit Funds Act in 2019, the following names have also been added. These are,

Chit funds have the following features:

What are Chit Funds Used For?

Chit funds are used for the following reasons:

How does a Chit Fund Work

Let’s understand how a chit fund works through an illustration.

Illustration: Rohan and Abhishek were friends.

Rohan was well educated and had a good job. Additionally, Rohan was also planning to start a business to sell fresh food to corporates online. For his business venture, Rohan needed capital. But banks and financial institutions charged too high rate of interest on a loan and required Rohan to fulfil a number of formalities. Rohan needed a capital of 8,00,000 rupees immediately. He couldn’t afford to wait to start his venture. He was stuck between Private money lenders and banks. These options require asset as collateral. They also accrue hefty amount interest.

Abhishek had a PhD. and was in a well paying job. He had no intention to start a venture but he was looking to save his earnings in a medium, where he can earn good interest and can withdraw money whenever he wants to. Abhishek was also finding it difficult to get an investment scheme that would allow him to deposit cash and withdraw money without any losses. No options were apt. Bank Accounts and Fixed Deposits had their own limitations. And investing in mutual funds and shares involved a lot of risks.

Rohan and Abhsehk decided to invest in a government funded chit funds scheme. The scheme included 20 members who contributed 40,000 each month for 20 months. The jackpot being 8 lakhs every month which would go to one member via competitive bidding till all members get to take the pot home once. Rohan and Abhsihek contributed 40,000 each in the first month. Since Rohan needed 8,00,000 for his capital he decided to participate in the bidding process in the first month itself. Rohan decided to forgo the maximum limit permitted which was 2,00,000 rupees or 25% of the total amount. Thereby taking back 6,00,000 rupees. The remaining 2,00,000 rupees was with the foreman. The foreman kept his fixed monthly commission that is 40,000 or 5% of the chit fund value, and distributed the remaining 1.6 lakh among all the 20 members.

Rohan opened his restaurant he couldn’t bid for the remaining months but he continue to deposit 40,000 every month. Abhishek, on the other hand, waited entire 40 months and got to take back the entire pot minus the foreman’s commision of 40,000 rupees. This way Abhishek earned extra amount since he didn’t have to forgo any amount and also earned the monthly dividends from the amount forgone by other bidders. 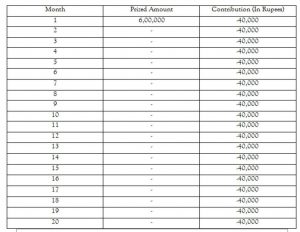 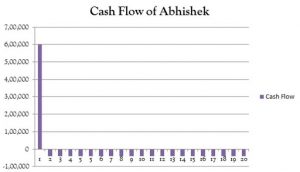 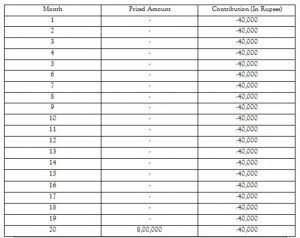 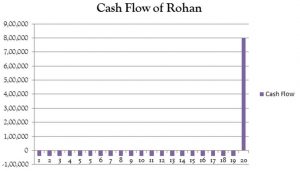 Thus, chits funds helps people in a number of ways.

Chit funds are of different kinds. These are:

Organized Chit Funds: In northern India, a common type of chit fund is where small paper chits with each member’s names are gathered in a box. When all the members come together for a monthly gathering, the person who is in charge in front of all the present members picks a chit from the box. The member so selected gets to take home the day’s collection. Afterwards, that person’s chit is removed from the box. The person who was previously selected comes to the meetings and pays his/her share, but his/her name will not be selected again.

Special Purpose Funds: Some chit funds are organized for a specific purpose. For example, Christmas gifts fund which has a very specific end date which is about a week before Christmas. Such a fund can reduce the cost and relieves the members from extra work in the busy festival season. Nowadays, such special purpose chit funds are conducted by, ladies wear shops, jewellers etc. to promote their goods.

Online Chit Funds: With the popularity of e-commerce, Chit funds are being organized online as well. Online chit funds are conducted online, and contributors can make their monthly contributions and receive the prize through online transactions including electronic funds transfer system. Each member gets his or her own online account to manage and circulate chit funds.

The Supreme Court has classified chit funds as contracts and also held that chit funds are a part of the Concurrent List of the Indian Constitution; hence both the centre and state can frame legislation regarding chit funds.

There are a number of legislations that regulate chit funds. They are:

Important definitions in the Act

Chit Funds Act defines a number of important terms. They are:

The Act did not apply to:-

(i) any chit started before the enactment of the Act, and

(ii) any chit (or multiple chits being managed by the same foreman) where the amount is less than Rs 100.

The Bill removes the limit of Rs 100, and also allows the state governments to specify the base amount over which the provisions of the Act will apply.

The Act specified various names which may be used to refer to a chit fund. These include chit, chit fund, and Kuri.

The Act specifies that a chit will be drawn in the presence of at least two subscribers.

The bill has a provision which allows subscribers to join through video conferencing.

Under the Act, the foreman is entitled to a maximum commission of 5% of the chit amount.

The Bill seeks to increase the commission to 7%. The Bill also allows the foreman a right to a lien against the credit balance from subscribers.

The Act, chits may be conducted by firms, associations or individuals. The Act states the maximum amount of chit funds which may be collected.  These limits are:

(i) one lakh rupees for chits conducted by individuals, and for every individual in a firm or association with less than four partners, and

The limit of chit fund has been increased to three lakh rupees and 18 lakh rupees.

Advantages and Disadvantages of Chit Funds

Things to Keep in Mind while Investing in Chit Funds

When a person invests in chit fund, they should keep the following things in mind:

Rights available to a Subscriber of the Chit Fund

The subscriber has a right to:

Therefore, even though chit fund is a great investment avenue, one has to be cautious before participating in it.