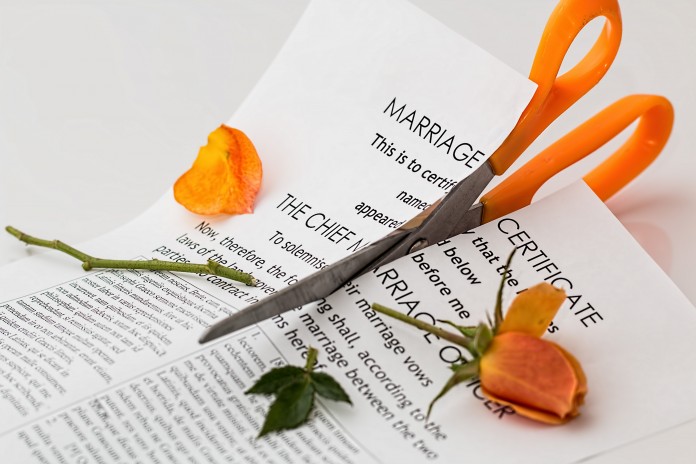 In this blog post, Debiyanka Nandi, a B.A. LLB student at Department of Law, Calcutta University and pursuing a Diploma in Entrepreneurship Administration and Business Laws from NUJS, Kolkata details the different laws pertaining to Divorce in India.

Concept of Marriage in India

In India, marriage is a necessity for establishing a healthy social life. A man and women is believed to be incomplete without one another. A man cannot have a material existence until he has a wife. A man is only half of hiMself and he becomes complete only after marriage. From time immemorial, the question regarding the nature of marriage has come across people’s mind. It has been accepted that marriage is a ‘sacrament’, that is, a holy tie between a man and a woman. Marriage is an indissoluble union of flesh with flesh, bones to bones and is to be continued even after death, in the next world. The object of marriage is ‘sublime’.

Concept of Divorce in India

Divorce is the legal dissolution of the marital union between a man and a woman. In India, divorce is granted by the court of law after receiving a petition from either husband or wife. Divorce is followed by granting alimony, child custody, child visitation, distribution of property, distribution of debts etc. Though the jurisdiction of divorce changes varies yet it can be classified as either no-fault divorce (mutual divorce) or fault divorce. In some cases the fault of the spouse may not be needed to be proved. The concept of divorce must not be confused with the concept of judicial separation. Judicial separation is the legal separation between the husband and the wife, granted by the court on petition from either the husband or the wife or both. In judicial separation the marital tie between the husband and wife continues to exist and neither of them enjoys the freedom to be re-married. Divorce must not also be confused with the concept with annulment of marriage. Annulment of marriage renders the marriage null and void from the first instance. The court declares the marriage to be null and void and the husband and wife should treat the marriage as if it never happened. The concept divorce is different from the other two measures of separation. It has a stronger legal binding and makes the husband wife more responsible.

The primary purpose of marriage is to impose the right of cohabiting upon the parties to the marriage. When either the husband has withdrawn from the society of the other without a reasonable excuse, the aggrieved party may apply, by petition to the district court for restitution of conjugal rights and the court on being satisfied with the truth of the statements made in such petition and that there is no legal ground for refusal of such application, may decree restitution of conjugal rights accordingly. Where a question arises whether there has been a reasonable excuse for withdrawal from the society, the burden of proof lies on the alleged.  The object of this section is to protect the marital ties from the wishes and whims of a person. The court acts as a guardian and compels the parties to live together with an intention to establish a better marital tie between the spouses especially when there is a scope of betterment of relation between the parties.

The parties may separate from each other under the decree of the court known as judicial separation. Separation of parties, whether under the decree of court or by an agreement between the parties, means separation from bed and board. After separation, the parties are not bound to cohabit with each other. Judicial separation can be allowed only if the marriage is valid. In a separation by agreement, the state of separation comes to an end as soon as the parties revoke the agreement or starts cohabiting with one another. The object of the provision of section 10 is to give time to the spouse for reconciliation. The main function of matrimonial relief is to provide protection to the innocent party and to dissolve the marriage only when the practical purposes have broken down. Either party to the marriage, whether solemnized before or after the commencement of this act, may present a petition to the district court praying for a judicial separation on the grounds specified under section 13 (1) and 13 (2) of this act.

After the proceedings are completed, the court may after it is satisfied that the wife has no independent income to support herself, can direct the husband to pay permanent alimony to the wife. The amount is decided on the basis of the income of the husband and is not absolute. The may be raised or reduced based on the changes in the condition of the husband. In order to receive the alimony, the wife should not be engaged in adultery or should not re-marry any other person.

THE LAWS GOVERNING DIVORCE IN INDIA

India is a land of diversity. It is a goldmine of culture and customs. The customs and culture changes at rapidly as we move from east to west and from north to south and so do the rituals of marriage and grounds of divorce. Marriage and divorce are a part of personal law thus they are not uniform. The grounds for determining a marriage to be valid and divorce also changes and are thus determined by various laws in India. Some of the laws discussed in the following are:

The Hindu Marriage Act (1955) extends to the whole of in India except the state of Jammu and Kashmir and applies also to Hindus domiciled in the territories to which this act extends who are outside the territories. This act is applicable to all the Hindus including a Virashaiva, a Lingyat or a follower of Brahmo, Prarthana or Arya Samaj. This act also includes the Buddhist, Jaina or Sikh by religion and to any person domiciled in the territory and is not a Muslim, Christian, Parsi or Jew by religion. This Act shall also be applicable to the scheduled tribes under Article 366 of the Constitution unless the Central Government otherwise directs.

The conditions for a valid Hindu Marriage

The grounds for divorce

A marriage may, on petition presented by either husband or wife, be dissolved by a decree of divorce on the grounds mentioned under section 13 of this act.  These grounds are faulty grounds and are available to both husband and wife. The grounds are as follows:ADULTERY: where the other party has been involved in any kind of sexual relationship outside the marital tie

There are some additional grounds available only to the wife under section 13(2) of this act. The grounds are as follows:

Section 13(b) was incorporated in the Marriage Laws (amendment) Act 1976. Section 13(b) provides for divorce by mutual consent. The petition for divorce by mutual consent is to be moved jointly by the parties to the marriage in the district court, on the ground that they have been living separately for a period of one year or more and they have not been able to live together and also they have jointly agreed that the marriage should be dissolved.

The petition cannot be withdrawn before 6 months and after 18 months from the date of presentation of the petition. If the petition is not withdrawn within the stipulated time, the court may after hearing the parties and making reasonable inquiry.

The Special Marriage Act (1954) extends to the whole of India except the state of Jammu and Kashmir. It is applicable to all the citizens on India domiciled within the territories to which this act extents.

Section 4 of the act provides for the conditions which need to be fulfilled for a marriage to be valid under this act. The conditions are as follows:

When a petition for dissolution of marriage has been filed due to any of the grounds in section 27 except for ‘presumed death’, the court may pass a decree of judicial separation instead of divorce if it feels necessary (section 27A).

The petition for divorce by mutual consent may be presented to the district court by both the parties on the ground that they have been living separately for or more than a year and it is not possible for them to cohabit together and they have mutually agreed dissolve the marriage. The petition can be withdrawn after the expiration of 6 months and before the expiration of 18 months from the date of presentation. (Section 28)

The Divorce Act 1869, extents to the whole of India except the state of Jammu and Kashmir. This act applies only to the Christians domiciled in India at the time of presenting the petition.

Section 10 of the act provides for the grounds for dissolution of marriage. Both the husband and wife can move to court to seek a decree for divorce under this act.  The grounds are as follows:

The act provides that the wife may also present a petition for dissolution of marriage on the ground that the husband has committed an act of rape, sodomy or bestiality

Section 10A of the act provides for dissolution of marriage by mutual consent. The petition for divorce by mutual consent may be presented to the district court by both the parties on the ground that they have been living separately for or more than a year and it is not possible for them to cohabit together and they have mutually agreed dissolve the marriage. The petition can be withdrawn after the expiration of 6 months and before the expiration of 18 months from the date of presentation.

Any husband or wife may present a petition to the district court praying that his or her marriage may be declared null and void. The grounds for presenting the petition to nullify the marriage are as follows:

The Muslim laws are governed by the holy book of Quran. The personal laws of the Muslims such as marriage, divorce, succession etc are derived from the religious holy book of Quran and therefore there is no specific legal enactment present for the same.

Conditions of a valid Muslim marriage

Muslim marriages are called ‘NIKAAH’. ‘NIKAAH’ is a contract therefore like any other contract there are certain conditions which need to be fulfilled in order to make it valid. The conditions are as follows:

A husband can divorce his wife by repudiating the marriage without giving any reason. Pronouncement of such words which express the intention to disown the wife is sufficient.  The wife can only divorce the husband if she has been delegated such rights by the husband in the agreement. After the Dissolution of Muslim Marriage Act 1939 has been passed, the wife has got various grounds under which it can divorce the husband.

The modes of divorce can be categorized as the following:

Extra judicial divorce can be divided into three types:

Conditions of a Valid Talaaq

There are certain conditions which need to be fulfilled in order to declare a talaaq to be valid. The conditions are as follows:

As we know marriage and divorce laws vary from one custom to another but the essence remains the same, that is, to provide justice to the victim. The law ensures that the husband and wife respects the sacramental tie of marriage as well as one another but at the same time it ensures that nobody must carry the burden of torture and disrespect  and has full freedom to break this when necessary. Apart from divorce there are various other ways by which a relief can be granted to the victim such as restitution of conjugal rights and judicial separation. The law also ensures that the spouse is well maintained even after divorce by directing the husband to pay alimony to the wife.