This article is written by Pushpdeep Kaur who is pursuing a Diploma in Advanced Contract Drafting, Negotiation and Dispute Resolution from LawSikho.

The government’s presence in a country is very much essential as it offers such roles to its citizens without which the country will eventually fail in its endeavors. “Government”, works for the welfare of the public and acts as a thermostat which provides the legal and social framework within which the economy operates. In addition to this, the Government aids its public by offering valuables like jobs, licenses to carry on a particular work, quotas in different fields, and much more. In addition to such valuables offered, the intervention of government into various activities of the public made it imperative to determine the liability of the government as now the individuals, as well as the government, embarked on to enter into contracts.

In this fast-paced growing world, every business wants to grow tremendously, no matter if it is a startup or a company that has its existence in the market, both are desirous of growth in the work they are involved in.

As per my view, an individual with a vision to make a mark in new territories generally faces the following issues;

Firstly, resources/money to carry forward their ideas, and

Thirdly, the indulgence of a lawyer to carry on with the legal work to gain protection from any kind of legal dispute concerning his business, that may arise in the future.

With a purpose to assist the public, many Government agencies draw out the services for contractual work as well. And procuring this type of contract can prove to be a helping hand that can support your company in its growth. These contracts are often well-worth the resources. Therefore, government contracts have landed greater importance in the contemporary world.

This article will brief the reader about the overall concept of Government Contracts.

It is crucial for every individual involved in any kind of business to be well versed with the meaning and concepts behind the several contracts that are required by him to carry out day to day operations and to increase the Company’s value. The above stated helping hand has a very significant place and great importance in the modern economy. The term ‘Government Contracts’ refers to the insertion of any Government body as a one-party (whether it’s Central, State, or any other statutory body) in a contract makes it a Government Contract, wherein the other party is a private individual.

While we look at the status of government contracts in India, it is vital to go through its contextual history. “All the contracts made in the exercise of the executive power of the union or of a state shall be expressed to be made by the President, or by the Governor of the state as the case may be, and such contracts and all assurances of property made in the exercise of that power shall be executed on behalf of President or the Governor by such persons and in such manner as he may direct or authorise.”

Difference between Government and Other Contracts

Article-299(1) of the Indian Constitution has postulated certain principles/conditions that a government contract must bring about in it. These are as follows: 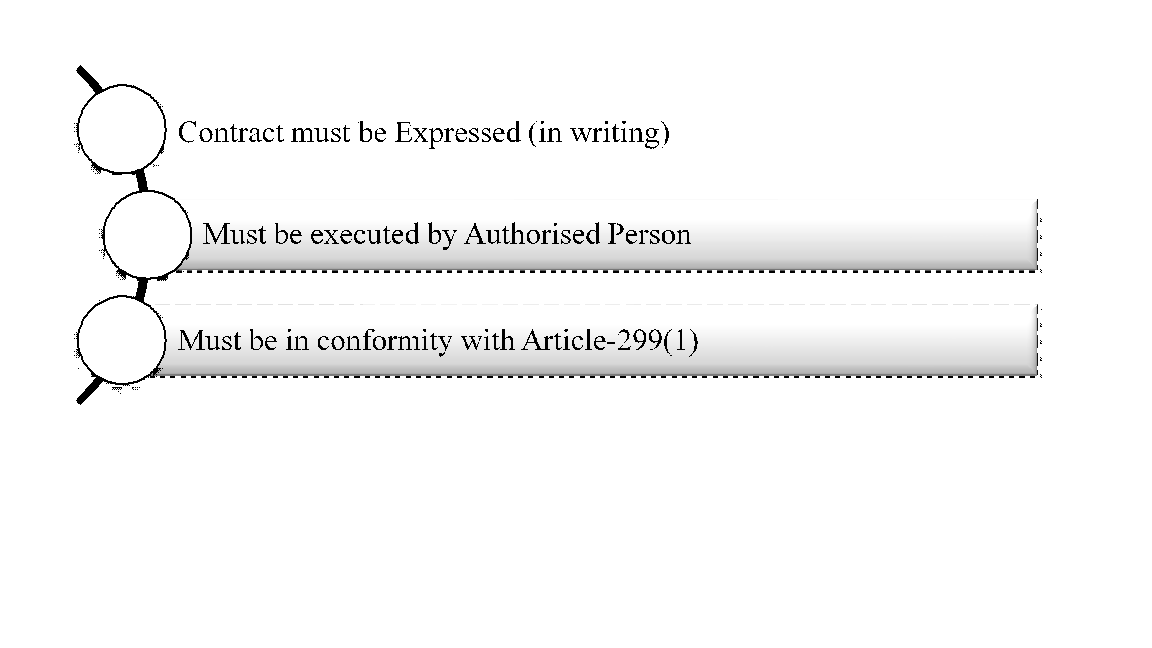 Contract must be Expressed

For a government contract to be valid, it must be expressed in writing.

Apex Court upheld the validity of a contract entered into between the government of India and the respondent through mere correspondence. It is coherent from this judgment that a lettered contract or written offer and acceptance is enough to constitute a valid government contract. And no formal document is required for it.

Contract must be executed by an Authorised person

In order to make a government bound in a contract or liable in a contractual dispute, it is important that the contract must have been entered and executed by the authorised person. This person can either be authorised by the President or Governor as the case may be.

In case the contract has not been executed by the authorised person it will render the contract to be null and void.

Contract must conform with Article-299(1)

Hence it can be asserted from the reading that the terms of the Article are mandatory.

However, in the case of other Contracts- Certain essentials are required to be fulfilled for contracts to become valid contracts, these are dealt within the pursuit of Section-10 of the Indian Contract Act,1872, and in case it is contrary to that it would be considered void. These essential elements are stated below:

All these elements constitute a Valid Contract and in case any single essential is missing, that forms a part of an essential element then, the non-existence of that particular element will result in the contract becoming null and void.

In simple terms- Implied Contracts refer to those contracts which are not directly expressed/stated. The question that unfolds at this point is whether an individual can enter into implied contracts with the Government or not?

The Apex Court held that Article-299(1) has no purview concerning the implied contracts. As discussed above the contract must conform with Article and if it is not then it would be no contract at all.

The main purpose that is tried to be achieved through the above-mentioned judgment is to render protection against unauthorized contracts and also to shield the interests of government officials in cases where they enter into contracts with unknown and careless parties who do not satisfy all the protocols laid down in the Constitution.

Thus, it is clear that there can be no implied contract with the Government.

Later on, the Courts realized that it would be too unhandy to urge on fulfilling the conditions stated in Article-299(1), the reason being the Government enter into many trivial contracts on a day-to-day basis (these may be oral as well), thus it will be very tough to make sure that every contract must be articulated in a particular form.

Consequently, the Courts have somewhat eased the meticulous conditions contained in Article-299(1).

Now, as we have gone through the overall concept of the Government Contract it is essential to be well versed with some major stuff on the same.

Securing Government Contracts can help your company grow enormously. If you want to enhance the boundaries of your company and increase its value, then government contracts can assist you in achieving the same.

Advantages of securing this type of contract are as follows-

All these upsides are attainable provided you bring out a set return each month and continuously meet the deadlines.

Essentials for Negotiating a Government Contract

Effective negotiation can prove to be a valuable asset for anyone to get the hang of the contracting environment. It is vital to know how to negotiate these contracts and win it. Both the parties; Government and other private individuals must negotiate the contract by remembering that they both have a mutual benefit and develop a good working relationship after the award.

One must take into consideration the below mentioned requisites while negotiating effectively:

Apart from these requisites, it is also vital to avoid the common mistakes in pre-award negotiations and then interpret accordingly which skills and tactics to use at which points in the contract process.

Thus, to get lasting benefits from these contracts one must negotiate even after the contract is awarded, in terms of logistics, facilitation, and fulfillment, or any other major prospects.

Government Contracts are those contracts in which one of the parties is the Government body (whether it is Central, State, or any other statutory body). In such contracts, the party executing the contract on behalf of the government is referred to as a contractor. These are different from other contracts in a lot of ways the most attractive is the monetary privileges that these contracts offer. Procuring these contracts is not a big challenge nowadays. Many Corporations offer services to make proposals, overcome obstacles, foster team cooperation, and make strategies to secure these contracts. For instance- TendersPage assists various companies with regard to contractual work. However, the most crucial skill to win these contracts or to receive full benefits out of it is carrying out effective “Negotiation”. These Government Contracts have gained much more importance and value in today’s time.