This article is written by Sandeep Garg, pursuing a Diploma in Advanced Contract Drafting, Negotiation and Dispute Resolution from LawSikho.com.

In this era of globalization and technological advancements, success of business depends on various factors such as trade secrets, client information, and a sensitive process which is crucial for the business to survive in a cutthroat business environment. Companies spend a lot of money and resources and all their blood and sweat to create a niche in the market over their competitors. Companies do not want to lose such information easily and employees are the people who have access to such information. These intricacies mandate companies to have Non-Compete Clause in the Employment Agreement of their employees to protect their data by restricting the employees and/or former employees from pursuing similar professions or engage with the competitor after the cessation of employee.

The employers have used this clause as an important tool to protect their confidential and price sensitive information by putting restrictions on employees.

Now let us understand what kinds of restrictions can be imposed on the employees.

Let us look at the enforceability aspect of these clauses.

Which Indian statues govern enforceability of non-compete clause in India

As per constitution of India, Article 19 (1)(g) grants freedom to Indian citizens to practise any profession, or to carry on any occupation, trade, or business. As, per Indian statues. In line of this, if we have a glance on Indian Contract Act, 1872 it very specifically says that:

“Every agreement by which anyone is restrained from exercising a lawful profession or trade or business of any kind, is to that extent void”.

However there is exception to this which says that One who sells the good-will of a business may agree with the buyer to refrain from carrying on a similar business, within specified local limits, so long as the buyer, or any person deriving title to the good-will from him, carries on a like business therein, provided that such limits appear to the Court reasonable.

Due to this exception granted under Indian Contract Act, 1872 non-compete clause in Employment Agreement holds validity under Indian Law.

Non–compete provisions for the term of employment are not regarded as ‘restrictive covenants’ under Indian law. However, having such provisions applicable after a person leaves the organisation is against the Indian Contract Act, and, therefore, not enforceable.

In famous landmark judgement of the Supreme Court of India in(2) M/s Gujarat Pottling Co.Ltd. & Ors vs The Coca Cola Co. & Ors on 4 August, 1995 (https://indiankanoon.org/doc/104935066/) any restriction imposed for carrying any business and trade falls under purview of  Section 27 of the Indian Contract Act, 1872, and such restrictive covenant in any Agreement shall not be legally valid and enforceable. It was also decided that any restrictions after the termination of the Contract is not valid and enforceable under law. Under Section 27 of the Contract Act, any restrictions laid down in Agreement which shall be applicable after termination of contract shall tantamount to illegal and anything illegal can not be enforced by the Court’s order.

In 2003 another judgement(3) of Percept D’ Mark (India) Pvt. Ltd v. Zaheer Khan, supreme court laid down that any agreement or clause restraining any person to carry on trade is restrictive in nature. Further, the Supreme Court also said that this principle does not specifically apply to this type of contract but also applies on employment contracts with respect to obligations continuing after termination of contract. However, any restrictions during the continuance of Agreement shall be treated as valid but any post termination restrictions shall not be valid.

In contrast, the Apex Court took a lenient view in another case titled Niranjan Shankar Golikari v. The Century Spinning and Mfg. Co. Ltd., wherein the court has decided that if a restraint of trade against the employee is restricting the employee from competing against the employer during the term of employment then such a covenant is valid and is enforceable in respect of the employee’s actions during the employment. So as per this case all contracts shall not be treated as invalid unless it is unreasonable, one sided and excessively harsh on employees.

Let us try to understand the Non-compete clause in Employment from the view of Competition Commission of India. CCI is very harsh as it imposes huge penalties and may initiate harsh legal proceedings against the Company.

In terms of above a case has been filed with Competition Commission of India titled as Mr. Larry Lee Mccallister v. M/s. Pangea3 Legal Database Systems Pvt. Ltd. & Ors., wherein question arose whether the non-compete clause in the employment agreement contravenes Section 3 & 4 of CCI Act.

While observing facts of the case CCI observed that the dominant position enjoyed by the Company is relevant to other business competitors in the same line of business, nor its employees.

The Competition Commission of India also observed that an employee has adequately negotiated his salary considering the non-compete restrictions imposed by the current employer and have considered in their pay package the period in which he would not be able to engage in other business or employed by any other competitor would not be treated as restriction from the employer. Hence such condition does not tantamount to breach under Section 3 & 4 CCI Act.

So the main point here to be considered by the corporates, lawyers and draftsmen is to draft the contract in such a way so that few negative covenants for the protection and safeguard of price-sensitive and confidential information, could be captured in contract by making balanced draft and not one-sided contract. Lawyers or corporates should not use excessively harsh terms in the contract draft which prime facie look one-sided and may go against the company. The main approach should be to use a simple and precise draft by keeping in mind best protection of the rights of companies.

Validity of non-compete clause in other countries

In the United States of America, there was a popular case titled(4) Amazon Vs Moyer where Moyer was working as Director of Sales for AWS division. He quit and joined Google as VP of Healthcare Google Cloud. Amazon sought to enforce non-compete proceedings against Moyer for joining a competing business.  Amazon raised an issue for the protection of know-how and other information Mayor accumulated on its AWS product. Amazon did not allege the Mayor on leaking of Confidential information, but he was aware of all route maps of AWS products. Amazon requested court to terminate his employment.

The Federal court concluded that  Amazon restricting Mayor to not to involve in any cloud computing business anywhere in the world is not reasonable restriction but an unfair competition and allowed Mayor to continue work with Google and also not restricted his activity in the industry where he was working with Amazon.

Recently Washington passed non-compete legislation that made it more difficult to enforce non-competes in certain circumstances.

Approach of employees while signing non-compete in employment agreement

It is advisable for the person taking up a new job to carefully ready all the important clauses of the Employment Agreement. If one is unable to understand the legal implications of clauses like Non-compete, non-solicitation and non-disparagement clauses then take the help of a legal professional.

An employee should also try to re-negotiate his salary package so that any non-competitive clause should be nullified with Garden Leave clauses and come out as a win-win situation for both the parties.

It is important to understand the duration of a non-compete clause so as to ensure fairness from the perspective of both the employer and employee.

What should be valid duration for non-compete clause

In a normal course of business, restraining an employee for a longer duration to carry on trade or profession in a similar line of business of an employer while being in employment shall be treated as a valid restriction. But, it is a matter of argument or dispute for signing a non-compete clause longer than a year post termination of employment. Although in few cases judiciary has taken lenient view and favoured if reasonable compensation has been awarded to employee or proper negotiations is done by the employee in lieu of signing non-compete clauses up to one year. In Indian Scenario, and after looking at the case laws decided is not to say that certain very long non-compete clauses will not be enforced. It all depends on the case to case basis and language of the employment agreement.

In my opinion, seeing the industry’s practice and court’s views in various case laws, it is advisable to not have more than 6 months post termination non-compete clauses. In order to avoid unnecessary legal hassle, it is in the best interest of the employer to have legally tenable non-compete clauses in employment agreements which can act as a shield for protection of confidential information of the employer.

“During the continuation of your employment and  6 (Six) months post termination of this employment, you shall be under an obligation to not to join directly or indirectly as employee, shareholder, Director, stakeholder, vendor, consultant, advisor or enter into an arrangement or agreement having direct and indirect involvement of you with the company, or its affiliates, indirect holding, subsidiary, Joint venture, Group Company having direct competition with the Company or having similar business or involved in the same business being done by the Company.”

It is pertinent for the Company to protect their confidential and sensitive information from its competitors to be in advantageous positions over its rivals. Companies spend lots of money and engage various individuals to develop their Trade secrets.  So, it is very much advisable to insert a Non-compete clause in the Employment Agreement. Companies should also take great care in incorporating this clause according to their requirement.  It should not be inserted in every employee’s agreement, who does not have access to Confidential Information. Companies should identify the person who may have access to such Confidential Information and then get a balance agreement drafted for Senior Executives or Key Managerial Personnel.  In normal circumstances, courts consider the view of companies and allow them rights to protect their confidential and proprietary rights.

However, as per the case laws mentioned above, the courts review every incident very sensitively and carefully to avoid any possibility to misuse the power to restrain any employee from carrying their business or trade by placing a very heavy burden of proof for enforcing these provisions. 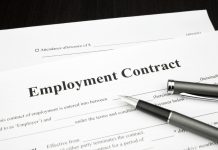