This article has been written by Aparajita Balaji, a student of Vivekananda Institute Of Professional Studies, affiliated to Guru Gobind Singh Indraprastha University, Delhi. She has discussed what is the hierarchy of Criminal Courts in India, along with the constitution and powers of the courts. Furthermore, the article elucidates the importance and need of such a big hierarchy of courts to provide justice to everyone.

Indian Judiciary is one of the most efficient Judicial systems in the world. The Judiciary derives its powers from the Constitution of India. The existence of Courts is required to check the misuse of the powers conferred by the Legislature or the Executive. The Indian Judiciary is the guardian of the Constitution of India, along with being a custodian of the Fundamental Rights of the citizens.

To know more about the hierarchy of judges in brief, please refer to the video below:

The Judiciary is well established with quite a lengthy and complex hierarchy of courts. The judicial system has been established in such a way so that it caters the need of each and every person of the country. The Judicial system in India is in the form of a pyramid, with the Supreme Court being at the top of the hierarchy.  The hierarchy has been created in a manner that it is possible for a person even from a remote area to approach the courts to get their disputes resolved. The system is well equipped to deal with issues of the Union as well as State laws.

The hierarchy of the Criminal Courts in India is as follows 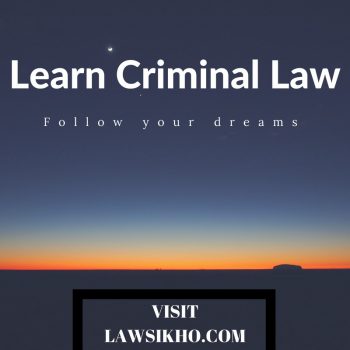 Constitution of Criminal Courts in India

The Supreme Court is the ultimate court, at the top of the Judicial system. It has the supreme judicial authority in our country.

The powers of the various courts have been highlighted in the Constitution of India. Apart from these courts, the power and functions of the subordinate criminal courts have been provided under the Code Of Criminal Procedure, 1973, as mentioned under section 6.

The power of the various subordinate courts is mentioned from section 26-35, under the Code of Criminal Procedure, which has been described below.

Section 26 mentions the list of Courts which are eligible to try offences – According to Section 26, any offence mentioned under the Indian Penal Code may be tried by:

The Magistrate judges are usually appointed by the High Court.

The jurisdiction in case of Juveniles (Section 27)– Any person who is below the age of sixteen years, who is a juvenile is exempted from the death penalty and punishment for imprisonment for life. The Chief Judicial Magistrate, or any other Court specially empowered under the Children Act, 1960 (60 of 1960) or any other law for the time being in force which provides for the treatment, training and rehabilitation of youthful offenders, are eligible for trying such cases.

3. The sentence for default of fine (Section 30)–  According to this section, the Magistrate has the power to pass imprisonment for default of payment of fine as specified by law. But the following conditions need to be satisfied.

For appeal, the aggregate punishment passed against him under this section is normally assumed as a single sentence.

Currently, in India, there are no specific guidelines on the issuance of Death sentence in criminal cases. Moreover, either the maximum or the minimum punishment have only been mentioned in most of the offences. It has been left upon the judge to decide, what should be the exact term of punishment in any particular circumstance.

There is no uniform procedure or performa for the judges to give a particular sentence in cases of similar circumstances. The quantum of punishment varies even in cases having similar facts. Therefore a structured layout should be given to the Judges mentioning the criteria on which they should base their judgements.

The Constitution of India holds the absolute authority and value in India. Hence, it becomes necessary to provide safeguards for its protection and therefore, the courts have been vested with various powers to keep a check and to ensure that no authority misuses its powers and encroaches upon others domain. The courtrooms are the places where people can take their grievances and get their disputes resolved upon the failure of other systems of the Government.

The hierarchy of the Courts has been developed in such a manner that it becomes easy for everyone who is living in this country to knock the doors of the courts whenever a dispute arises. It provides a platform for the citizens for appealing to higher courts, in case they feel that justice has been denied to them by the lower courts. India is a country with a huge population in it. Therefore, it needs this existing system of Judiciary to prosper and makes its process easier, so that people can approach it easily so that Justice is given to all citizens of this country.