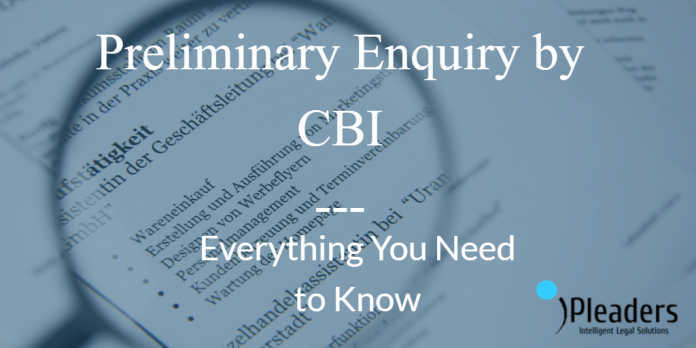 This article on Preliminary Enquiry by CBI is written by Varun Chopra, a student of National University of Advanced Legal Studies, Kochi.

In the cases where the information and the complaints received by the CBI in relation to a particular case is such that there is enough evidence to show misconduct of the public servants but, not enough to justify the registration of a case under Section 154 of the Code of Criminal Procedure, a preliminary enquiry is usually initiated.

Conditions To File A Preliminary Enquiry

In a case where the commission of a cognizable offence is apparent according to the complaint or the information provided to the CBI, a preliminary enquiry cannot be registered.

Therefore, it is necessary that the Superintendent of Police must carefully analyse the material available at the time of evaluating the verification report submitted by the Verifying Officer so that the registration of a preliminary enquiry is not resorted to in situations where Regular Cases can be filed under Section 154 of the CrPC.

When the verification of a complaint as well as source information reveals the fact that a cognizable offence has indeed been committed, a preliminary enquiry can be changed into a regular case as is enjoined by the law. In certain cases, like when a case regarding the unnatural death of a person is referred to the CBI for enquiry, a preliminary enquiry is to be setup to ensure that the cause of death is ascertained and to decide whether there is enough evidence for the filing of a regular case.

Whenever there are requests from other branches to include a part of enquiry in their Preliminary Enquiry within the local limits of the branch concerned, the complaints should be  entered by the latter branch. However, the procedure for the same is a little different. These cases are to be recorded in a separate crime register of Personal Enquiry and given a serial number for reference. The SP receiving such request may get the part- enquiry done at the earliest and forward the report to the concerned SP as early as possible.

Registration Of A Preliminary Enquiry

There are various important things that are to be kept in mind while registering a preliminary enquiry pertaining to the abuse of official position by a public servant.

For instance, in the case of abuse of official powers in the matter of business or commercial decisions, one matter that needs to be reviewed very carefully before initiating a preliminary enquiry is the difference between a legitimate business risk and malafide intentions.

This ensures that decisions are taken in good faith by the officials.

Hence,  the decisions that are a bit risky will not be investigated by the CBI as it’s the legitimate business risk but, any mala-fide intention that is shown in a business decision, taken by an official, will be investigated and prosecuted as a corrupt act.

The registration of a Preliminary Enquiry against a retired Civil Servant should be resorted to very rarely. Section 9(2)(b) of the Central Civil Service Pension Rules, 1972, the Departmental proceedings, if not instituted while the Government Servant, when the said servant was in service, the same can not be instituted, whether before his retirement or during his re-employment, such a suit can not be instituted, in respect of any event, which took place more than 4 years before him/her leaving such institution.

If such proceedings are to be instituted, it can only be done with the consent of the president of India. Therefore, the decision to register a PE against retired Government Servants should be taken at a senior level and after careful examination of all the facts in the light of the provisions detailed above.

In cases where it becomes clear that soon after the enquiries are started, nothing useful is likely to come out or that the case is really fit for a departmental probe only. No time should be wasted over such cases and the Preliminary Enquiries should be recommended for the closure or for departmental probe, as may be appropriate, as early as possible.

A registration report should contain the allegations levied in the complaint, along with all important details about the suspects involved in the case.

If the case involves the public servants, the registration report should include:

In those cases where the names of more than one suspect is involved in the complaint, extreme care should be taken while drafting a Preliminary Enquiry report.

The preliminary Enquiry into the complaints that have been vetted should be done in a quick and efficient manner.

However, issuance of notices under sections 91 and 160 of the Code of Criminal Procedures.

In cases in which the CVO desires to see the documents collected from other departments or parties before deciding the nature of administrative action, they can be shown or sent to him with a detailed list.

The process of the preliminary Enquiry must be finished within 3 months of the initiation of the enquiry. Hence, the respective DIsGs are supposed to monitor all the Preliminary Enquiries which are been pending for more than three months.

At the conclusion of enquiry in every PE, the Investigating Officer will prepare an Enquiry Conclusion Report in the prescribed form and submit it to the Superintendent of Police.

In appropriate cases, the SP may dispense with preparation of FR-II by the Law Officers. He shall seek orders from the Regional DIG/Zonal JD/Head Office, as the case may be, in respect of the cases of other categories by forwarding Enquiry Reports along with his comments. Final Report in the prescribed form need not be prepared when a PE is converted into RC.

This’s all about Preliminary Enquiry by CBI for now. Did you find this post useful? Let us know in the comments section. Don’t forget to Share!

All you need to know about Hindu Minority and Guardianship Act,1956

Things not to do in the initial years of litigation