Composition of an electoral college

The electoral college consists of

Composition of Legislative Assemblies of the States

Composition of the Council of States

Composition of the House of the People

Qualifications for president of India

Article 38 lays down the qualification required to be eligible for the President of India. The following criteria are:

Process of the election of the president of India

Uniformity in the scale of representation of states

Value of vote of an MLA= total no.of population of the particular state/ number of elected MLAs of that state divided by 1000.

The balance between the votes of MPs and MLAs 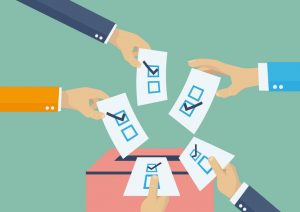 The single transferable system is mostly used in the representation. In this type of system, the elector has the right to one vote and the number of seats to be filled up is not required. Each voter can rank the candidates in accordance with their preference on the ballot paper.

The quota of surplus vote

The surplus vote of the first preference of each elected candidate would go in vain. Thus, those votes are transferred to the second preference candidate.  The count of the surplus vote is known. This is the process of relocating excess votes.

Reasons for indirect election of the President of India