This article is written by Amit Darshan, pursuing a Certificate Course in Introduction to Legal Drafting: Contracts, Petitions, Opinions & Articles from LawSikho.com.

A memorandum of understanding (MOU) is an agreement drafted as a formal document between two or more parties. MOU’s are generally not legally enforceable and the parties entering an MOU tend to avoid all sorts of legal consequences.

An MOU acts as a starting point for negotiations, thereby defining the scope and the purpose of the communication between the parties. In other words, it showcases the intention of the parties to enter into a legal agreement. MOU’s generally form as an initial phase in international treaty negotiations and could also be a part of a merger acquisition between two businesses as an example.

Purpose of a memorandum of understanding

One of the initial questions which might arise would be why two parties would put an effort in drafting an MOU, if it is not an enforceable document. One of the examples to understand when a party would be legally required to enter/create an MOU would be in the case of a housing authority when they would need to negotiate with their tenants.

The main purpose of entering an MOU is because it has a lot of potential power as it requires the parties to come to some sort of mutual agreement, and in order to do that, they have to take stock of their needs and wants and put them on paper. In such situations, an MOU is an appealing option because it’s simple and direct, without the complexities and combative standard terms and conditions of contract law. Parties can themselves mutually draft an MOU agreement without needing legal expertise.

An MOU would list the mutually accepted expectations of the parties once the initial negotiation is being done by them, on reaching a mutual consensus of each other’s expectations an MOU would be created. Parties would generally enter into an MOU, prior to entering into a legal agreement/contract as they usually would desire to avoid any legal consequences. Hence an MOU is preferred at the initial phase.

Steps involved in an MOU

Contents of an MOU 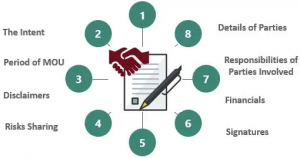 An MOU is a documented expression showcasing the intent of the parties. Hence, the purpose of MoU is not limited and can be adopted for any scenario in case the parties do not desire to enter a formal contract. Listed below are vital/crucial clauses that form an MOU:

Crucial elements information of a memorandum Of understanding

Advantages of an MOU

Conditions for alteration and termination

An MOU’s terms and conditions can be altered on the mutual agreement upon both parties. Parties can also agree upon a notice period by which a party can terminate the MOU by serving notice as per the provisions under the notice period.

MOUs are widely used and considered to be an important starting point in bilateral and business relationships. Formally written roles, responsibilities, and risks provide clarity on how different situations will be approached during the course of the agreement.

Some MOUs prove to be just as good as legal contracts, because parties stick to them at all times for the larger mutual benefit, while others flounder because parties do not adhere to them due to diminished viability (in which case it is mutually dissolved) or due to selfish interests of the parties involved.