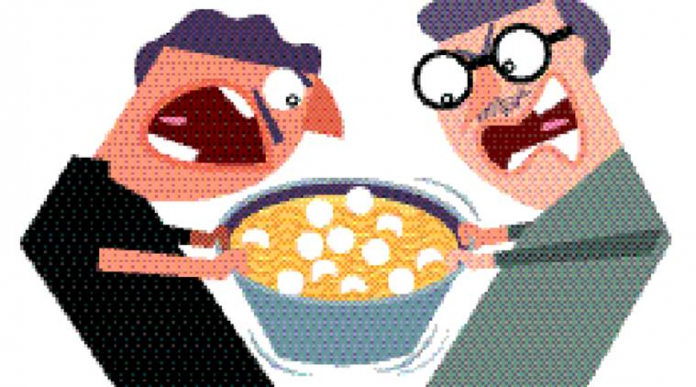 This article has been written by Shoronya Banerjee and Oishika Banerji who are undergraduates from Amity Law School, Kolkata currently pursuing B.A.LLB(H). This is an exhaustive article that deals with an old fight between two states that came to an impactful solution at the end.

The battle over the recognized sweet of Bengal, Rasogolla became featured when the Odisha government demanded the recognition of “Odishara Rasagulla” and claimed it to have originated in Odisha itself. While both the states claimed to have a strong connection with the sweet’s originality, both wanted legal protection in the form of the geographical indication as well.

The legal status of geographical indication and the protection provided under it assumes immense importance taking into account its extreme commercial potential. Without legal safeguards, the competitors operating in the market who have no relation to the rights associated with the geographical indication try to utilize it for their goodwill and thereby build a strong market reputation for themselves and across the world.

In the backdrop of the 19th century, it was Nabin Chandra Das, a famous sweet maker of Bengal who is considered to have created the delicacy sweet of Bengal, Rasogolla, at his residence in Bagbazar, Kolkata. The scuffle over the sweet resulted after Odisha Government started celebrating July 30 as the  “Rasagulla Dibasha” ( Rasagulla Day ), claiming that the sweet was a part of their tradition for over centuries and that it was used in the form of a bhog served to Lord Jagannath on the last day of Rath Yatra since time immemorial.

The battle over the prestigious sweet had escalated in 2015 when Mr Pradip Kumar Panigrahi, the Science and Technology Minister of Odisha had claimed that various committees set up to detect and uncover the real history behind the origins of the sweet had come up with evidence to support and prove the motion that Rasagulla had existed in Odisha for about 600 years.

The West Bengal government in order to protect its culture and heritage filed for a Geographical Indication tag on the name of  ‘Banglar Rasogolla’. A petition was filed by the Odisha government thereby challenging the same on the grounds of originality. Failing to provide substantial evidence, the petition was dismissed and GI tag was awarded to ‘Banglar Rasogolla’ in November, 2017.

This wasn’t the end to the battle over the sweet. The battle turned bitter when a second petition was filed by the Odisha Government taking into consideration the texture and taste of the sweet that differs from that of its neighbouring state thereby wanting the acknowledgement of the GI tag on ‘Odishara Rasagulla’. Further an Odia scholar, Asit Mohanty claimed that he found the mention of the word Rasagulla in the Odia Dandi Ramayana, which dates back to the 15th century and was written by a poet of medieval times, Balaram Das.

Rasogolla is not just a sweet or a soft, spongy and permeable ball of cottage cheese soaked in sugar syrup or jaggery, it is considered to be an emotion and it has been placed at a position where it has become an important part of the identity of Bengal. If not for anything else, one thing that everyone across the nation and worldwide associates with West Bengal, is Rasogolla. Nabin Chandra, the person alleged to have made the sweet for the first time was the only breadwinner in his house right from a very young age. His job at Indrer Mishtir Dokaan was from where he realised his affinity towards the sweets trade. Initially, he was only skilful at making dry sweets but the love and fame had paved the way towards him thinking about coming up with a sweet that could satisfy someone’s hunger and quench his or her thirst as well.

Nabin Chandra Das’s aspiration and briskness of teaching more and more people about the recipe and method of making Rasogolla instead of fighting for patenting it showcased the true spirit of West Bengal. Carrying the legacy forward, it was Nabin Chandra’s grandsons, whose established sweet shop had become extremely famous amongst the British in and around 1935. At present, this famous sweets shop has taken the form of a brand and is popularly known as KC Das, with several outlets across the nation.

Carrying out the process of excavating evidence for tracing back the roots of the delicacy, the reference of the sweet was found in Sri Chaitanya Mahaprabhu, a Hindu monk’s biography known as the Chaitanya Charitamrita dating back to the 15th century. Nabin Chandra Das’s family successfully supplied all the papers required for the GI application. The visit by the GI department and the chemical analysis of the Rasogolla recipe furthered by them by the Patent Information Centre led to them winning the GI tag for ‘Banglar Rasogolla.’ Apart from the affluent heritage, rich culture, luscious culinary style, Tagore, and many more things, Rasogolla occupies an important position in this list. The people have held onto the ages-old trade of sweets with at least two sweet shops built around the corner of every street in the state. Even a bandh or a lockdown cannot forbid the hustle and bustle around these sweet shops. The relationship between the people of West Bengal and sweets is inevitable and when it comes to Rasogolla it’s more of the emotions taking a toll over the taste buds.

The Rasagulla story that was brought to life by the Odisha culture states that the roots of the sweet go back to the famous Jagannath temple in Puri, Odisha. Alongside being a part of the temple, the sweet played an essential role in the rituals as well. The name that was provided to this sweet was “Pahala Rasagulla”. It is said that Lord Jagannath had offered the sweet to his consort named Lakshmi as a means of pacification for not taking her along with him during the Rath Yatra. This famous sweet that stood out among all other sweets became familiar with the name of “Khira Mohana” in the backdrop of the 11th century because of its appearance. This dish made out of white chenna became a mandatory dish to be offered to Goddess Mahalakshmi on the last day of the Rath Yatra.

The rectification petition filed by the chairman of the Odisha Small Industries Corporation (OSIC) named Ramkrushna Dasmohapatra mentioned that before the very existence of the city of Kolkata came Lord Jagannath. During researching about the origins of the Odishara Rasagulla, along with its mention in Balaram Das’s ‘Dandi Ramayana’, Odia writer, Fakir Mohan Senapati’s writing ‘Utkal Bhramanam’ published in 1892 also intimated the use of Rasagullas in those days. So much so, that poet Damodar Pattanayak’s poem ‘Bali Jatra’ published in 1893 also divulged the prominence of Rasagullas, sweet shops, and the other sweets used at that time as well.

A brief overview of geographical indication

Geographical indications are any indications which identify where a particular product originated from, in which territory or region of a country along with the quality or characteristics of the product, which relates to its geographical source or origin. A common feature in everyday life, the geographical indication, safeguards a particular product and provides exclusive rights to the person associated with the same. This intellectual property right is different from other rights of a similar category in a way that the former is a region or location-specific.

In India, protection and registration of GIs for goods and products come under The Geographic Indications of Goods (Registration and Protection) Act, 1999 in India. The Agreement on Trade-Related Aspects of Intellectual Property Rights (TRIPS) talks of GIs’ protection at international levels. In 1999, Darjeeling Tea became the first product in the country to have bagged a GI tag. Following these 344 more products received GI tags out of which 34 belong to Tamil Nadu. The Dindigul lock and Kandangi saree originating from Tamil Nadu feared a dark future for the dying interest of people in them. The artisans hoped that the GI tag could improve this condition and help them to popularize it again. The year 2019 saw the addition of 14 more products to this list which included Kandhamal Haldi from Odisha, Himachali Kala jeera and Himachali chilli (apricot) oil from Himachal Pradesh, Coorg Arabica coffee from Karnataka and so on. Now the historic city with the royal heritage is doing the rounds of news for the GI tag of the world-famous Mysore Pak. For the purpose of registration, the product should come under the purview of Section 2(1)(e) of the Act. Further, the product should also abide by Section 9 of the Act which lays down certain parameters that restricts registration of a product from taking place.

Current standing of the battle

Within two years of West Bengal’s Rasogolla being geographically identified, Odisha Small Industries Corp. Ltd, a state government undertaking was conferred with the same. The latter claimed that it is the soft, non-chewy, juicy traits of Rasogolla originated in Odisha that differentiates it from that of Bengal’s. The archetypal round structure of white colour, soft and chewy makes a new sweet out of the same ingredient, chenna altogether.  The GI tags have formally accepted both the versions put forth by the states as tracing the origin of the delicacy is a difficult task and certainly, its origin remains to be uncertain. The registration of the “Odishara Rasgulla” was done under Section 16(1) of Geographical Indication of Goods(Registration and Protection) Act,1999. The Odisha Small Industries Corp. Ltd and Utkal Mistanna Byabasayee Samiti, which has been a traders’ organisation were provided with registration number 612.

Odisha’s application had put forth certain particular and discreet details about the Odishara Rasagulla which brought in clarity between the sweet of the same name hailing from two different states. External colours are not used in the preparation of the sweet, but the profoundly coloured Rasagulla’s prepared by utilizing the method of sugar caramelisation is extremely popular. Off white Rasagullas are commonly available. They are cooked and prepared at 110 degrees celsius for almost about 40 minutes. The process of sugar caramelisation gives the sweet the new off white colour.

What can be understood from the above discussion is that heritage is something that all Indians are proud of. Every state has its own language, colour, traditions, significance and heritage which they cannot compromise on any grounds. This is probably the very reason why both the states were deeply involved in the sweet battle then regained its sweetness after both the states were provided with rights for their speciality and specificity surrounding a sweet in the form of a geographical indication. The intellectual property right that has gained importance in today’s world where everyone is aware and acknowledged with the fact of safeguarding their creations, has also been recognised to be significant in its own way. The battle of this famous sweet that has its roots in both the states that are rich in culture, traditions and stories, made the country realize the importance of the possession of a right. Adding to this it has to be mentioned that the battle also proved to be relevant because along with the possession of the right, the emotions of people hailing from both the states were involved in the same which made the battle familiar to people all across the world. Ruskin Bond, the well-known author had once said that when all wars were over, the butterfly was still beautiful which in reality proved out to be true for the battle as it had a sweet end to it.