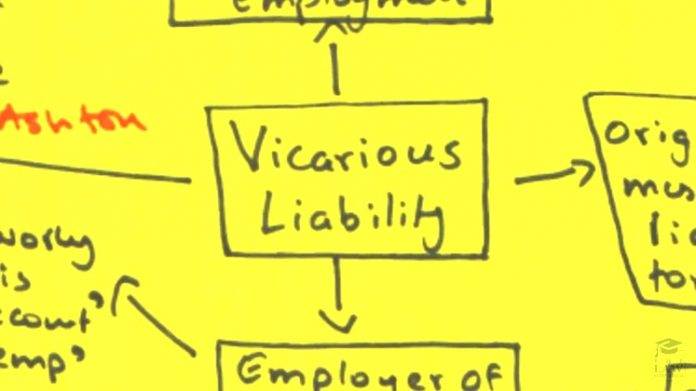 This Article is written by Adarsh Singh Thakur, 3rd-year student, Indore Institute of Law. He discusses the meaning of Vicarious liability and how it is authorised and ratified under the law of torts.

A works for B and while doing his work, he has caused injury to C. Here, C has the right to claim damages for injury caused to him. But in this case, B will be held liable for the act of A. This is because of the principle of vicarious liability.

Many Questions arise such as:

The concept of vicarious liability deals with all such cases.

Vicarious liability means a liability which is imposed on a person for an unlawful act or omission by another person. Here even if a person did not do any wrongful act himself, he can still be held liable if someone else does such act. This liability arises in those cases where there is a special relationship which exists between the wrongdoer and the person who is held liable such as master and servant relationship.

A is an employee of B and while doing his job, due to his negligence C suffers injury. Here due to vicarious liability, B will be held liable for A’s act because A was working on his behalf, during the course of employment and thus B will be liable for any wrong which arises by an act of A because B has authorised him to do the act.

Vicarious liability is based on 2 very important principles or maxims which are:

According to this maxim, the superior should be held responsible by law for the acts done by his subordinate. Thus whenever a subordinate person does an act for another person, the other person who is his superior will be held liable for the wrongs arising out of the act and thus he will be vicariously liable.

When does the liability arise?

There are many relations in which the concept of Vicarious liability arises they are:

If there is a relation of the abovementioned type between two people then vicarious liability can arise for a person even though such an act is done by another person. For e.g., if A and B are in a master-servant relationship then, for any wrong done by A, B who is his master will also be liable if the act is done during the course of A’s employment.

In such cases, there is an express or implied authority which is given to another person and since the act is done on behalf of another person, such a person for whose benefit the act has been done will be held liable.

In these situations, a person also becomes liable for the direct consequences which occur in the commission of the authorised act.

B is a driver of A who is driving the car with A’s authority and while driving it he causes an accident due to his negligence. Here even though A was not the one driving the car, he will be liable because it was done on his behalf by B with his authority.

But it is not always the case and many times a person can act for another even without their authority and the person can be held liable despite him not giving an authority to do such an act. This happens when the person ratifies an act which was done on his behalf by the other person.

Ratification means that the person for whom an act is done by another approves of such an act after it has been done. So, the authority for acting on his behalf is given after the act has already been done. In the law of torts, the effect of ratification is that, it will be treated as if the act was done with the authority from the beginning.

A is an agent of B who enters into an agreement on B’s behalf with C for an unlawful act without B’s authority. Later B approves of such contract thereby ratifies it. So, B will be vicariously liable for such unlawful act because he has ratified it.

In the case of Commissioner of Police of the Magistrate Metropolis v. Woks (2012) EQLR 209, it was held that for an employer to be liable for the acts of his employee, he must have given his authority to such a person to act in that manner and such an authority can be given either expressly or impliedly and it may be done before the commission of the act, or after the act has been done.

Thus, in the above case, the validity of the vicarious liability by ratification was upheld and therefore such an act will make the ratifying person liable for the tortious act of another.

This is based on the maxim Omnis ratihabitio retro trahitur et mandato aequiparatur. It means any act which has already been done for which consent is given afterwards will have a retrospective effect and such consent will be treated in the same way as if the act was done on the command of the ratifying person.

If A does an act without B’s authority on his behalf and B, later on, ratifies that act, the law will regard such an act to have been done as if it was done by A on B’s command.

In the case of Remploy Ltd. v. Campbell & Anr (2013) UKEAT/0550/12/JOJ, the question before the court was regarding ratification. The claimant had been removed from his services and he cited his race to be the grounds for such termination. Remploy Ltd. provided the workforce to Redbridge (the company which terminated the claimant) and at the time of termination they had a duty to inquire into the reason for the same. They failed to do so and therefore the claimant claimed this act amounted to the ratification of his termination. On this, the Court had observed that the question is whether the 3rd party (which was the claimant here) perceived that Redbridge did this act in the name of or on behalf of Remploy. If the answer to that question is yes only then the question about the ratification by Remploy of the act of Redbridge by its action can arise. The court, therefore, sent the case back to the Tribunal after to decide the question of ratification after it found that the 3rd party here had perceived that the act was done on behalf of Remploy.

There are certain conditions which have to be fulfilled for ratification to be valid and hold the person vicariously liable under the law of torts. These conditions are:

A is an agent of B and he is on a vacation. While on vacation A commits a tortious act for his own benefit which injures C. Here since the act was done by A for his own benefit and not on behalf of B therefore, B cannot ratify this act and he will not be liable.

If a person who is ratifying the act of another person is not aware of the fact that some wrongful act is being done, he cannot be held liable for such ratification because he has not approved  the unlawful act and thus without having full knowledge about the facts a ratification is not valid in order to make him liable. In this way, a person can be protected from unknowingly approving the wrong act and in these cases, the person has who committed such an act is liable alone even if he did such an act for the other person without his authority.

A is an agent of B who purchases a property for immoral purposes on B’s behalf. If B knowing about such purpose ratifies the act of A, it will make B vicariously liable for the resultant wrong which will arise in this case.

In the law of torts, vicarious liability arises because a person is deemed to have done an unlawful act through another person and therefore it is assumed in such a situation that the person did that act himself. But if a person is not capable of committing that act at the time of ratification then he cannot ratify it because here he himself is not in a position to do it and therefore he cannot be said to have acted through another person.

An illegal or void act cannot be ratified

This is the last condition which has to be fulfilled in cases of vicarious liability by ratification. A reasonable man will not willingly ratify an illegal act because in such a case he knows that he will be liable for such an act and the law also does not allows such ratification to be valid. Thus, if a legal act is done and during the commission of such an act any tortious act has been committed, the person will be vicariously liable if he ratifies that act because he has authorised another person to do a legal act and while doing such an act an illegal act was also committed as a consequence of it. So the person has to be liable for its consequences as well.