This article is written by Shradha Jain, pursuing a Diploma in Intellectual Property, Media, and Entertainment Laws from Lawsikho.com.

Today’s technologies are growing increasingly sophisticated, and computer activities that formerly seemed mystical or impossible are becoming commonplace. Artificial Intelligence (AI) is one such thing. We have long been mesmerized by the idea of robotics and machines behaving like humans. For example, in 1950, Isaak Asimov wrote about robots having the ability to execute human duties with ease and intelligence in his science fiction novel ‘I, Robot.’ Today with the help of AI it seems plausible. We currently live in an era in which computers are more than just number crunching devices, but are also executing jobs that need intellect when performed by people. Whether IBM’s Deep Blue beat Garry Kasparov, the greatest chess player of all time at a game of chess not once but twice or humanoid robots like Sophia built by Hanson Robotics, AI systems are piquing the curiosity of academics and investors all over the world. In this article we see various aspects of patents and AI and what advantages and challenges it possesses along with the 14th IP5 meet and what were its outcomes.

As defined by WIPO “A patent is an exclusive right granted for an invention, which is a product or a process that provides, in general, a new way of doing something, or offers a new technical solution to a problem. To get a patent, technical information about the invention must be disclosed to the public in a patent application.” In other words, patent protection implies that others cannot commercially make, use, distribute, import, or sell the innovation without the patent owner’s permission. Every awarded patent has a duration of 20 years from the date of submission of the application. However, for applications submitted during the national phase of the Patent Cooperation Treaty (PCT), the term of the patent will be 20 years from the international filing date granted under the PCT. The Patents Act, 1970 (No.39 of 1970), as modified by the Patent (Amendment) Act, 2005, and the Patent Rules, 2003, control the patent system in India. The Patent Rules are updated regularly to reflect the changing environment, the most recent being in 2016. A patentable innovation relates to a new product or method that involves an innovative step and is capable of industrial application. It must, however, not fall into the categories of non-patentable innovations listed in Sections 3 and 4 of the Act. If an invention fulfils the following requirements, it is the patentable subject matter:

What are patents in AI?

The capacity of computers and robots to execute mental functions typically associated with humans, such as learning, thinking, and problem-solving, is referred to as artificial intelligence (AI). Although fundamental AI technologies such as neural networks, deep learning, and rule-based systems have been around for a long time, they have advanced substantially in the last decade, propelling AI to the forefront of our lives. It is here to stay and will continue to be a disruptive force in the coming years.

In India, in order to patent an AI-powered invention, one must meet the computer-related inventions (CRIs) standards, which prohibit the patenting of computer programmes or algorithms. These criteria are now focused on computer/algorithm/software-based innovations and are also used to assess AI-based ideas. To claim protection for AI-based software the following is recommended:

Because AI is considered a part of computer science, inventions using AI are referred to as “computer-implemented inventions” (CII). In this regard, the EPO Guidelines for Examination, F-IV, 3.9 describe CII as innovations using computers, computer networks, or other programmable apparatus, where at least one feature is realised through the use of a programme. Patent offices in different parts of the globe handle computer-implemented innovations differently. Article 52(2)(c) of the European Patent Convention (EPC) prohibits patenting computer programmes “as such.” Inventions involving software, on the other hand, are not barred from patentability as long as they are technical in nature. The consequences of Article 52 EPC have been established by the case law of the EPO Boards of Appeal throughout the years, creating a solid and predictable framework for the patentability of computer-implemented innovations, including AI inventions. The EPO’s Guidelines for Examination reflect this approach. 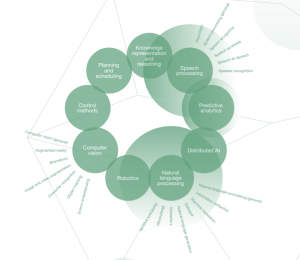 The IP5 was established in 2007 as a platform for the world’s five major patent offices to share ideas and find possibilities for collaboration on common issues such as patent examination workloads, backlogs, patent quality, and inefficiencies in the international patent system. The members of IP5 are the European Patent Office (EPO), the Japan Patent Office (JPO), the Korean Intellectual Property Office (KIPO), the China National Intellectual Property Administration (CNIPA), and the United States Patent and Trademark Office (USPTO). The 14th IP5 Heads of Offices Meeting was conducted by video conference on June 23, 2021, sponsored by the Japan Patent Office. The leaders agreed on a roadmap for collaboration in the domains of new emerging technologies and artificial intelligence (AI), as well as the start of new initiatives aimed at harmonising patent prosecution procedures and practises, during the meeting. Furthermore, they discussed different areas of future IP5 collaboration, with a focus on the post-COVID-19 period and the importance of IP rights in resolving societal concerns. The results of the meeting were as follows-

The fast development in artificial intelligence (AI) research over the last five years is one of the most noticeable features of the field. The high number of patent filings over this time period, as well as the drop in the ratio of scientific publications to innovations, indicate a move away from theoretical research and toward the use of AI technology in commercial products and services. The sorts of patents submitted are also reflecting this trend, with large increases, in particular, AI applications and sector-specific domains.

Companies make up 26 of the top 30 applications, with the majority of them working in consumer electronics, telecommunications, and/or software, as well as electric utility and automotive manufacturing. Only four of the top 30 are universities or government-funded research institutes. The firm with the most patents (8,290 applications) is IBM, followed by Microsoft (5,930 applications). Twelve of the top twenty firms are headquartered in Japan, three in the United States, and two in China (according to the 2019 WIPO Technology Trends report). IBM now has the greatest portfolio of AI patent applications, with 8,290 patented inventions and Microsoft comes in second with 5,930 innovations. With 5,223, 5,102, and 4,406 AI patent applications, Toshiba, Samsung, and NEC have the third, fourth, and fifth biggest portfolios, respectively, according to the 2019 WIPO Technology Trends report. The benefits of AI technology are numerous and have the potential to genuinely revolutionise many parts of life, including the world of IP; nevertheless, the introduction of AI technology also creates a number of difficulties within the IP sector that will most certainly need to be addressed in the near future.

Machine learning is based on teaching software to make judgments by delivering feedback on the output it generates while analysing a collection of training data. The programmers design the feedback criteria used to train the software, but the software generated by the training process is frequently a tangle of weights and interconnections between nodes in a neural network or some equally human-illegible chunk of arithmetic. As a result, while AI systems developed using Machine Learning (ML) frequently demonstrate very effective decision-making, they do so without providing their developers (or anybody else) with any significant insight into the system’s underlying logic. As a result, finding infringement of a claim aimed at the usage of an AI model is simpler than detecting infringement of a claim demanding detailed data about the inner workings of the AI model. Although it is usually preferable to pursue claims whose infringement is more easily traceable, it is equally vital to guarantee that the claims are oriented towards the patentable subject matter in the first place, which takes us to the other major issue in patenting AI technology.

Describe a technological challenge and how your invention solves it technically. For example, if present technologies are too sluggish for practical application, attempt to identify structural or functional flaws that cause the slowness, and then describe how the structures and functions of your innovation permit greater speed. In terms of AI technologies in general, try highlighting the benefits your technology offers, such as:

A disclosure is considered sufficient under Section 10(4) of the Patent Act when the complete specification contains an adequate written description that clearly and unambiguously describes the invention, satisfies the best method requirement, and allows a person of ordinary skill and knowledge in India to perform the claimed invention without undue experimentation. This has been reiterated in several decisions including Press Metal Corporation Limited vs Noshir Sorabji Pochkhanawalla, where the court ruled that “the invention is described in an obscure and ambiguous language and on this ground, the patent is liable to be refused.” However, as is common in AI-related inventions, the input and output are known, but the logic, which may include an AI tool in the middle, is not. Even though the decision process is defined, its execution does not ensure the same outcome. This is one of the specific reasons why AI-related inventions might be challenging to fully disclose.

While patenting offers advantages over copyright protection, AI-based computer systems can be protected by copyright law since they can be deemed literary works. Patenting an AI-based innovation gives greater protection and covers the logic of the invention, whereas copyright only protects the creator against an entity duplicating the literary work (computer programme).

The patent system encourages firms and individuals to engage in R&D. It fosters an innovative culture by allowing firms to realise the benefits of their investment; both monetary and intellectual. A patent grants the inventor a 20-year time in which to profit from their ground-breaking ideas. Whether it’s through bringing a product to market, collecting royalties through licencing, or even selling the patent to a better-positioned company to take it forward.

There has been unprecedented growth and broad dispersion of AI across technologies, inventor-patentees, organisations, and locations, attesting to AI’s rising relevance for all those seeking intellectual property protection. However, along with it comes greater challenges as well. One main challenge has been where the AI itself has turned inventor and whether such inventions could be patentable. We have come from patenting AI to AI itself creating inventions that could be patented as they qualify the criteria for patents except that AI is not a human. It raises various questions along with it like ownership, infringement, etc. The IP5 should take note of this and develop a uniform set of rules, regulations, or criteria for granting patents in cases where AI is the inventor (obviously, whether or not to be implemented will depend on the decision of the patent office of a particular jurisdiction), which will serve as a benchmark for deciding future cases and help create a predictable application outcome for the applicants.