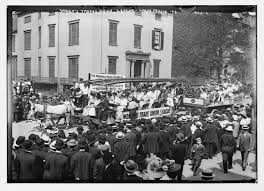 In this blogpost, Sonal Srivastava, Student, Amity Law School, Lucknow, writes about the procedure to register a trade union under the Trade Unions Act, 1926

Chapter II of the Trade Unions Act, 1926 deals with the provisions of the registration of trade unions. According to section 2 (h) of the Act, “Trade Union” means any combination, whether temporary or permanent, formed primarily for the purpose of regulating the relations between workmen and employers or between workmen and workmen, or between employers and employers, or for imposing restrictive conditions on the conduct of any trade or business, and includes any federation of two or more Trade Unions. Thus, the present article shall deal with the most important aspect of trade union, and that is the registration of trade unions.

According to section 4 of the Act, any seven or more members of a Trade Union in accordance with the provisions of the Act may make an application apply for registration of the trade union. There are two conditions subsequent to the same, firstly no trade union of workmen shall be registered unless at least 10% or 100 of the workmen, whichever is less engaged in the employment of the establishment are its members on the date of making of its application and secondly no trade union shall be registered unless on the date of making of application, minimum seven of its members who are workmen are employed in the establishment or industry.

Also, such application shall not be deemed to be invalid merely on the ground that at any time after the date of the application, but before the registration of the trade union some of the members but not exceeding half of the total number of persons who made the application has ceased to be members.

According to section 5 of the Act, every application for the registration of the trade union shall be made to the Registrar and shall be accompanied by a copy of the rules of the Trade Union and a statement of the following particulars namely-

Where a trade union has been into existence for more than a year, then a copy of the assets and liabilities shall also be submitted along with the application for registration.

Provisions to be contained in the rules of a Trade Union

According to section 6 of the Act, a Trade Union shall not be entitled to registration under the Act unless the executive committee has been established in accordance with the provisions of the Act and the rules provide for the following-

According to section 7 of the Act, the registrar may call for further information for the purpose of satisfying himself that whether all the particulars are in accordance with section 5 and 6 of the Act.

According to section 9 of the Act, the registrar shall issue a certificate of registration to the trade union after registration under section 8 which shall be conclusive proof that a trade union has been duly registered.

On an application to the appropriate forum, the court may either dismiss the appeal or pass an order directing the registrar to take appropriate measures.

The court shall have the same powers of a civil court under Civil Procedure Code, 1908 and may follow the same procedures.

The highest appeal can be made to the High Court.

According to section 12 of the Act, all communications shall be made on the registered office of the trade union

According to section 13 of the Act, every registered trade union shall be a body corporate having a common seal and perpetual succession with power to acquire and hold movable and immovable property and shall by the said name sue and be sued.

The presence of trade unions establishes a healthy relationship between the employer and workmen with a sense of responsibility towards each other. Trade unions define and channelize the rights of the workers with pressure on the employer to not deceit them. The registration of Trade Union ensures that a trade union duly certified and recognized and thereby the provisions for same are laid down exhaustively in the Act.