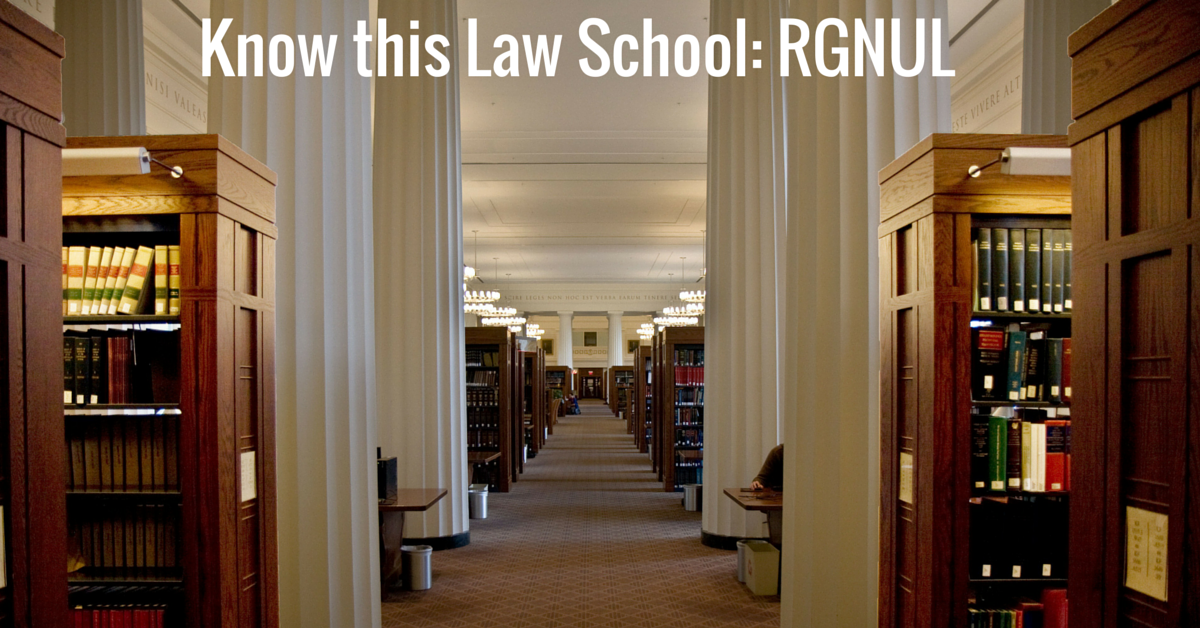 Next in the line in “Know thus Law School” series of post is on RGNUL written by Soubhik Chakrabarti who is in 1st Yr in RGNUL.

If you are worried about which National Law School to choose after giving next year’s CLAT, RGNUL of Rajiv Gandhi National University of Law is an option you have to take into consideration. RGNUL is one of those National Law Universities which has undergone a sea of change in the last year. With the new Vice Chancellor Professor Jaiswal joining RGNUL in 2011, many new developments have occurred.

The quality of education in RGNUL is pretty good. One of the most wonderful features about studying in RGNUL is the friendly relationship students have with teachers. The teachers mix well with the students. The students can interact with the teachers after the class and can seek help anytime they want. Many of the teachers have Ph.D. degrees or are pursuing their Ph.D.’s and are well qualified for teaching.
There is presently a two semester based examination system each year. Starting from 2011 RGNUL provides Majors in Economics, Sociology or Political Science (anyone) and Minors in History, Political Science or Sociology (any two). Each semester students have to do the project and give presentations on each of the subjects which really tests the students’ academic abilities. Moreover, there is little need for rote learning and independent thinking is always encouraged. RGNUL has been doing very well in Moot court competitions and parliamentary debates.

RGNUL is one of those places which emphasizes not only on creating good Lawyers but also good human beings. Perhaps this is the reason why most of the students who passed out last year joined litigation rather than going in for the corporate sector, however it does not lead to an inference that the Corporate sector is lagged behind. Out of the first graduating batch last year, there were many who went for judicial clerkship the Supreme Court. This year, there has been some good placement already so far, and a lot more are expected to be placed by the end of the year.

The University is pretty strict and does not allow any indiscipline on its campus. Students who indulge in acts of indiscipline are caught and show caused. The students and teacher are extremely friendly. The seniors are extremely approachable and willing to help in most instances. There exists no such thing as ragging in the University as everyone in the University knows the consequences of it. Perhaps the best thing about the University are the AC rooms, which provide great comfort for students in the hot weather of Patiala in summer. Evenings are spent either playing the various games or watching TV in the common rooms.

The New Campus is nearly 50 acres in size, and being 11-kilo meters away from the city has a feel of its own. Students still go to the old campus in the middle of the city to study every day (by the University buses) as the academic block in the New Campus has still not been completed. From next year though all classes should start at the new campus where students reside, as the Academic Block there too is near completion. The new campus has a host of facilities for the students which include Gym, Table tennis courts, basketball courts, televisions, badminton court, volleyball court and even playground, among others. So if you are thinking to have a great time playing, this is the place! You could hone your talents and participate in the various fests throughout the country the University represents and bring laurels to the University!
The whole RGNUL campus is termed to be a green campus so there are lots of plantation of trees and plenty of gardens making the Campus wear a ‘Green look’. There is also the Wi-Fi which is available 24*7 with some great speeds. RGNUL also has one of the best National Law University Libraries, with synchronization to the Intranet of the University. There is no book that one does not get in the library and even if someone finds a book that is not available in the library, the University fetches it within a week upon request. The Intranet is also the valuable resource for all RGNUL students and has everything from Exam schedules, Mess food items every day to the syllabus of the subjects studied for the term. The new campus is being developed at war speed. There is the stadium that is being built as well as the shopping complex. The boys and girls hostels have already been built and students have been staying in the spank new hostels from last year. RGNUL soon plans to have its own moot court hall too and so has even started its own RGNUL moot Court Competition from this year.

In the end, comes the city of Patiala itself. It is one of those peaceful cities you can ever find. Beware if you like a fast paced life with night outs and going to bars, this is not the place for you. Patiala is the place for you to grow and to learn. There is a mall and there are some places to go, but the relaxed yet steady lifestyle in Patiala is different to experience indeed. There is, of course, the majestic building which many people know Patiala to have, but the greenery and peacefulness in the roads are what takes the cake.