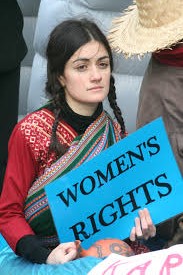 In this blogpost, Mayuri Khandelwal, a student of IInd year, Hidayatullah National Law University, Raipur writes about the rights and reliefs available to a woman in India under various laws of the country.

The increasing rate of crimes against women and the declining sex ratio has forced the judicial and the legislative bodies of our country to enact various laws particularly aimed at providing security and protecting the integrity of women. This article highlights the laws of India, which deal with special rights and protection of a woman.

Filing a complaint through E-mails

There are certain guidelines issued by the police that entitle a woman the privilege of lodging their complaint through emails or registered post. In case she cannot go to the police station, she can send a written complaint by e-mail, and registered post addressed to the Deputy Commissioner or the Commissioner of Police. The officer will then forward the complaint to the SHO of the police station where the incident took place that will then verify the complaint and lodge an FIR.

Under the High Court mandate, each police headquarters must have at least one woman officer not below the post of Head Constable, accessible round-the-clock particularly dealing with rape casualties of any degree by providing guidance towards the advancement of the casualty. Furthermore, the victim must be looked by a woman officer and can be captured only in the vicinity of a woman officer with appropriate poise.

The Supreme Court has held that women can’t be detained before dawn or after dusk. Women must be ceased, kept, and addressed by a lady officer. In the absence of such female officers, women can’t be arrested or taken away.  Section 160 of the Criminal Procedure Code provides that a woman can’t be called to the police station for interrogation. She can be interrogated at her residence in the presence of female constable and family members.

The Supreme Court by its ruling has provided relief to rape victims by putting forward the concept of Zero FIR. Many a times the police headquarters under whose jurisdiction the incident happens declines to register the complaint of the victim in order to avoid the responsibility and forwards the complaint to other police stations. In such cases, she has a right to file a complaint at any police station irrespective of the place of incident under the Zero FIR ruling. The SHO of the concerned police station then needs to take immediate action on the FIR. However,few women are aware of this right. Therefore, the need is to make them aware of the various benefits to which they are entitled today.

The Minimum Wages Act, 1948 provides for the least wages to be paid to any gifted, semi-talented and incompetent laborers. The lowest pay permitted by law for a talented laborer in Delhi is Rs 423, be it a man or a woman.

Employers must be secured

The Supreme Court in Vishakha case laid down certain guidelines for protecting the women at the workplace. According to the said judgment, all work environments ought to have an in-house board to manage inappropriate behavior dissensions. It recommended setting up a complaints committee at all workplaces, headed by a woman employee with at least half the members being women. A business’ inability to constitute an Internal Complaints Committee will be liable for punishment of up to Rs 50,000.

Rights under Succession of Property:

Under the Hindu Succession Act, 1956, any individual who is entitled as a beneficiary to the property of predecessor, ought to get the property irrespective of his/her gender.

The Indecent Representation of Women (Prohibition) Act, 1986, prohibits any individual or association to distribute or post, distribute, display or promote – online or disconnected from the net – any sort of representation of women that can be thought to be profane. This is mostly used in the cases of advertisement where the portrayal of women is outraging her modesty.

Maternity Benefits Act of 1961 states that each woman has a right to profit paid maternity leave for a period of 12 weeks. The law also provides that no business ought to intentionally require a pregnant woman to do any kind of strenuous physical labor including an extended period of time of standing or any work that is likely to interfere with her pregnancy or cause complications like premature birth miscarriage or adversely affect her health.

Medical Termination of Pregnancy Act or the MTP Act, 1971 provides that pregnancy not surpassing 12 weeks may be ended in light of the assessment of a solitary specialist. However, if the time of pregnancy exceeds 20 weeks, then the opinion of two specialists must be taken before initiating an abortion.

Section 164 of the Criminal Procedure Code states that the statement of a woman who was raped can be recorded only before the district magistrate when the case is under trial, and nobody else should be available. On the other hand, she can record the statement with stand out cop and lady constable in an advantageous spot that is not crowded and does not give any probability of the statement being heard by a fourth individual. The cops need to, by law, upkeep the lady’s entitlement to protection. It’s vital for the individual to feel safe and not be under any sort of anxiety while portraying the occurrence.

The police can’t decline to register an FIR on the ground that sufficient time has elapsed since the occurrence of an event. In the event that the police refuses to lodge an FIR stating that considerable time has elapsed, one need surrender. Assault is a frightening occurrence for any lady, so it’s usual for her to go into stun and avoid reporting it quickly. For this very reason, the Supreme Court has laid down that the police must register an FIR irrespective of the gap between the incident and the reporting.