This article has been written by Gone Srimahee and Manasa Dammalapti, from O.P Jindal Global University.

A Stateless Individual is a person who is not considered as a national by any State under the operation of its law. Under statelessness, these people are denied civic, political and fundamental human rights provided by a state under its legal framework.

The key international conventions addressing statelessness are the 1954 Convention relating to the Status of Stateless Persons and the 1961 Convention on the Reduction of Statelessness. Additionally, the right to a nationality is incorporated under Article 15 of the Universal Declaration of Human Rights (UDHR), Article 24 of the International Covenant on Civil and Political Rights and under other various human rights treaties and provisions related to nationality rights. UDHR, under Article 15, provides that “ everyone has a right to a nationality” and that “no one shall be arbitrarily deprived of his nationality”. While the protection of these stateless people has been a challenge for the international community for over sixty years now, they are often disproportionately powerless and relatively disregarded by the states.

While there are various other treaties or conventions such as International Convention on Civil and Political Rights address the problem of statelessness with specific reference to the subject matter of the convention, the 1961 Convention on Reduction of Statelessness (the 1961 Convention) is created solely for the purpose of decreasing Statelessness, a phenomenon that has been adversely affecting the lives of millions of people around the world. While the exact number of stateless people is not known, UNHCR estimates that around 31 people are newly displaced every minute, raising the average estimated total to 68.5 million. This number includes 40 million Internally Displaced People (IDP), 25.4 million refugees and 3.1million asylum seekers. 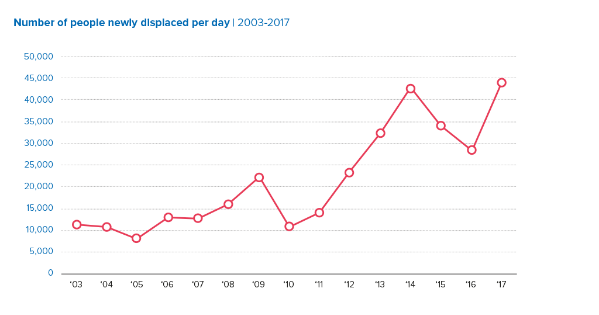 The table above shows that the past decade has seen a considerate increase in the forcibly displaced population. The subsequent increase in this number from 42.7 million to 68.5 million in 2017 is observed after the conflict in the Syrian Arab Republic, Myanmar, South Sudan, Ukraine and Yemen.

Statelessness as a phenomenon occurs due to a variety of reasons such as discrimination on basis of gender, race, ethnicity, religion, etc. Despite of Article 3 of the 1954 Convention states that “the Contracting States shall apply the provisions of this Convention to stateless persons.

without discrimination as to race, religion or country of origin”, ethnic cleansing is one of the major factors contributing to the increase in forcibly displaced population. One such example is the ethnic cleansing of the Rohingya Muslims from the territory of Myanmar. In respect to this, the U.N. High Commissioner for Human Rights Zeid Ra’ad al-Hussein has described Myanmar’s treatment of the Rohingya as “a textbook example of ethnic cleansing.”

Myanmar’s government, in order to attain ethnic homogeneity, has created the most brutal and massive episode of ethnic cleansing under the Operation of Clean and Beautiful Nation ( Operation Pyi Thara). They are known to be one of the most persecuted minority groups and have been excluded from the 2011 refugee repatriation agreement between the Myanmar and Bangladesh governments on account of not being citizens of Myanmar.

Statelessness also occurs due to the emergence of new states, population transfer between existing states and frequently the outcome of new policies of the state that aim at excluding non-native population. This article, however, concentrates on the 600,000 Rohingya Muslims in Myanmar’s state of Rakhine and their stateless nature due to the new citizenship law of the country.

Brief history of the Rohingya Muslims

The Rohingya Muslims are one of the numerous ethnic minorities in our country and account for around one million of the population as of the beginning of 2017. These Muslims constitute the biggest population of Muslims in the state of Myanmar with most of them residing in the state of Rakhine. This ethnic minority speak their own language and have their own culture and also claim that their ancestry gives back to that of the Arab traders. Even though they have been residing in Myanmar for decades, the government of Myanmar has refused to give them citizenships and consequently not recognized them as people according to the 2014 census. They are only seen as a community, which has illegally, immigrated from Bangladesh and are now residing in Myanmar a majority Buddhist country.

According to the UN report, in the last few years, 700,000 men, women and children of Rohingya have been fleeing the country of Myanmar and escaping to Malaysia, Thailand and mostly Bangladesh as Myanmar has taken to ethnic cleansing through violent strategies. Ethnic cleansing has been defined by the commission as a purposeful policy designed by one ethnic or religious group to remove by violent and terror-inspiring means the civilian population of another ethnic or religious group from certain geographic areas. The military has launched an attack of killing raping and setting 288 villages in the northern part of Rakhine on fire giving the stateless refugees no option but to flee from their homes for their survival.

An estimated number of 6700 Muslims have out of which 730 have been killed within the month after the violence group. The government of Myanmar has, however, put down these numbers to 400 and have announced that these clearing operations by the military have ended in the month of September 2017. And the government of Myanmar has been woefully silent or has given a watered-down description of the true numbers of these deaths and displaced people.

Human Rights Watch has estimated that the displaced Rohingya Muslims are nearly 900,000 in cox’s Bazar area in Bangladesh southern tip, consisting of nearly 700,000 thousand new arrivals since 2015 and 11,432 since the beginning of 2018. The Rohingya Muslims have said to arrive here after the troops, backed by the Buddhist mobs have attacked them, burning the village of Rakhine. Even after the displacement from Myanmar, the Rohingya Muslims face another threat of being hit by a cyclone of high winds and flooding in their refugee camps set up in Cox’s Bazar area. Regardless of the efforts made by the Human rights watch to accommodate as many displaced immigrants the refugees and their camps still remain highly vulnerable to their catastrophic natural calamities. Within these refugee camps, over 19,500 Rohingya Muslims have been relocated from such high-risk locations as of June 10th 2018. These refugee camps also suffer from extensive overcrowding and are barred from travelling outside these refugee camps.

Despite not being a signatory to the 1951 convention, Bangladesh under the customary International Law has agreed to keep the border open to give asylum to the displaced Rohingya refugees and are provided with basic humanitarian needs like food, water, shelter, etc. to these 900,000 refugees. Bangladesh’s refugee relief and repatriation commissioner, Abdul Kalam has stated that “creating a conducing environment for return rests with Myanmar, not here. We cannot force them back”.

The UN Security Council has urged Myanmar to withdraw its army from the Rakhine State but has not taken any enforceable measures against the violence yet. The UNSC has also condemned the use of excessive violence on the Rohingya Muslims and has called on the state to take immediate measures to control and de-escalate the situation. According to British UN Ambassador Matthew Rycroft, this is was the first statement that the Security Council has made in nine years with respect to the Rohingya crisis. While Myanmar completely denies the act of ethnic cleansing, the Security Council on a resolution dated 6th November 2017 has noted:

“The Security Council calls upon the Government of Myanmar to ensure no further excessive use of military force in Rakhine State, to restore civilian administration and apply the rule of law, and to take immediate steps in accordance with their obligations and commitments to respect human rights, including the human rights of women, children, and persons belonging to vulnerable groups, without discrimination and regardless of ethnicity, religion, or citizenship status, further calls on the Government of Myanmar to implement measures in line with resolution 2106 (2013) to prevent and respond to incidents of sexual violence, and encourages in this regard the Government of Myanmar to work with the Special Representative on Sexual Violence in Conflict.”

The Security Council in the same resolution has noted that the humanitarian aid provided to these displaced refugees remains severely limited. The Work Bank President, Jim Yong Kim, has released half a billion dollars in grant-based support for the Rohingya crisis. Other banks and humanitarian organizations such as the Asian Development Bank have also generated funds for the aid. The UN Population Fund (UNFPA) has set up reproductive health clinics and safe spaces in the camps of Cox’s Bazar to fight the monsoon seasons.

A few recommendations which can be made to the respective governments and the UNHCR in regard to the Rohingya Muslims to facilitate them in attaining a nationality are:

To the Bangladesh Government

To the Government of Myanmar

To the UN High Commissioner for Refugees (UNHRC)