In this blog post, Sreeraj K.V., a student of Government Law College, Ernakulam, Kerala writes about road accidents and legal recourse to be taken once such accidents take place. This blog post includes the current status of India in connection with road accidents, provisions of the MV Act and also certain procedures that must be fulfilled by the parties immediately after an accident. 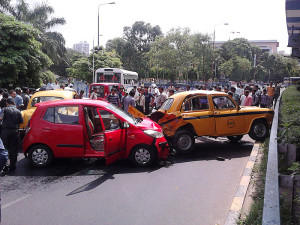 While looking into to the laws and statutes which ensure road safety as well as protection for the victims of road accidents, these laws include Motor Vehicles Act, 1988 and certain provisions of criminal law in the case of the death of the victim of road accidents. The Motor Vehicles Act prescribes certain important provisions which every driver should follow. It includes:

There are also provisions under Section 279 of the IPC dealing with a rash and negligent driving as well as Section 304A dealing with causing death by negligence which is read along with Section 279 in the case of death of the victim of an accident. Now, looking into various reasons of accidents, it has to be stated that many of the drivers undertake rash and negligent driving, as well as the reckless drivers of buses and trucks, are in a habit of drinking. Under the influence of drugs, they drive their vehicle at high speeds by negligently avoiding traffic signals and hence causing road accidents and sometimes being victims themselves.[2]

Using mobile phones during the time of driving has also been common now-a-days. Government as well as the Motor Vehicles Department has provided strict regulations that a person must stop his vehicle towards the side of the road for attending a call or calling through mobile phones. But 90% of the drivers attend their phones while driving, mainly the taxi drivers who are in a hurry to pick their customers from different places. Not only them, but also car drivers, mainly elite class people, use their phones during the time of driving as they very well know that money will resolve every issue. The attitude of the police at the time of an accident is quite surprising. Now-a-days, we see many people riding their bikes at a very high speed as well as in a rash and negligent way through highways as well as on roads where there is a high rush of vehicles. The impact of such accidents will be very high when compared to other accidents. The main factor behind such accidents is that, in such cases, these bike riders will be colliding with a vehicle which will be a bigger one, say a car or any other heavy vehicle. In such instances, no person shall admit that two-wheeler was at fault. Rather, they will blame the driver of the four-wheeler so that the driver of the two-wheeler can secure some compensation. For instance, there was an accident in the Bangalore-Tumkur highway where a person was in his car. A bike had suddenly come and collided with a car from behind. The people nearby as well as the bike rider blamed the car driver and he was forced to give compensation. There is a loophole in the traffic regulation laws which make the person is driving bigger vehicle liable for the accident without even looking into the nature of the accident. This is quite disappointing since the person driving the bigger vehicle does not get a chance to prove that the other person was at fault.

During the time of an accident, the very first thing that a person should do is take the injured person to the hospital and provide him with proper medical attention to save his life. Then he may approach to the nearest police station seeking legal guidance regarding the matter and lodge a complaint against the person who made the fault. In many cases, the complaint will be against the driver of bigger vehicles as it is a commonly seen aspect in India. After lodging the complaint, the case may be registered at the concerned police station under various provisions of the Motor Vehicles Act, 1988 as well as various other criminal laws if needed. After registering the FIR, the vehicle/vehicles which caused the accident will be taken to the police station for proper fitness certification by the officials of the Motor Vehicles Department. During that time, driver/drivers involved will be called and their statements will be taken, and then the case will be forwarded to the concerned Motor Accidents Claims Tribunal (MACT). At that time, proper documents such as Registration Certificate of the vehicle, a copy of the FIR, post-mortem report if any person is dead, proper insurance papers, documents containing the age of the victim, proof of the income of the victim, etc. Have to be submitted. During the time of the trial, both the accused and the victim get a chance to plead and it is up to the insurance company to act accordingly in terms of the compensation to be given to the victim.[3]

Road accidents are increasing at an alarming rate day by day and the police as well as the judiciary find it very difficult to resolve the cases in a short period. Latest statistics reveal that it takes around three to five years for the court to make a decision in a case concerned. Keeping this in mind, the government and the Judiciary planned to establish some courts dealing with the issues of road accidents. Now, we have Motor Accidents Claims Tribunal (MACT) all over India to deal with the cases of road accidents. The main goal behind the establishment of MACT was to decide accident related cases in a much faster way as compared to ordinary courts. But still, pending cases are very high as compared to the cases resolved. Certain other machinery such as alternative disputes resolution may also be applied for accident cases where there are fewer amounts of damages which can be resolved by way of compensation.