The article was written by Laboni Bhakta, a student of GNLU, Gandhinagar.

“Man, I see in Fight Club the strongest and smartest men who’ve ever lived. I see all this potential , and I see it squandered. God damn it, an entire generation pumping gas, waiting tables – slaves with white collars. Advertising has us chasing cars and clothes, working jobs we hate so we can buy shit we don’t need. We’re the middle children of history, man. No purpose or place. We have no Great War. No Great Depression. Our great war is a spiritual war. Our great depression is our lives. We’ve all been raised on television to believe that one day we’d all be millionaires, and movie gods, and rock stars, but we won’t. And we’re slowly learning that fact. And we’re very, very pissed off.”—–The Fight-Club (Movie)”

“Doing business without advertisement is like winking at a girl in the dark. You know what you are doing, but nobody else does”

Liquor has become the prominent player in the game of advertisement industry and has also come up with catchy ads especially when it comes to surrogate advertisements.  Bagpiper soda and cassettes and CDs, Blender’s Pride,  Imperial Blue cassettes & CDs, Haywards soda, Royal Challenge golf accessories and mineral water etc.

The liquor industry always has its own standpoint in defence and is mostly claimed by the liquor lobbies that they follow every laws and regulations and it is also argued most often that “if a brand has equity, why shouldn’t it be allowed to advertise? Also, brand extension is an industry practice adopted by different product categories”.

And these claims can stand very justified if looked from layman’s point of view but what they fail to understand is that the liquor industry is simply taking advantage of the loopholes. What this liquor industry tries to do is ‘play with minds’ and there are certain illusions being played in such a way that the viewers are made to believe that it’s liquor and ‘the teenage or the youths’ are the ‘star attractions’.

Even though there has been legislation passed as per the Cable Act under the Ministry of Information and Broadcasting, that no broadcaster is permitted to show an advertisement which indirectly or indirectly ‘seducing’ the viewers so as to promote alcohol , tobacco etc. Although the tobacco ad has been stopped but liquor ads seldom show their ads in a disguised way. This is because of the marketing strategy that they keep on changing and coming with new innovative ideas which is like sidelining the legislation which even though look perfectly alright but the impact left in the viewer’s mind is something else. It seems that they are secretly trading their brand and the real intentions remain to be subtle.

“Be what you wanna be” – this what Bacardi ad ends with and it keeps on running in your head , although the ad portrays that Bacardi is showing music CDs and music promotion but the people holding a glass of liquor and grooving to the music. And the ad ends like “Bacardi-CDs and Audio Cassettes”.

Surrogate ads are very much prevalent in around us like IPL cricket team merchandise shirts has logo of ‘R&C’ and it’s awkward but looking from a layman’s perspective it’s quite obvious portrayal of liquor and the liquor ad marketing strategy is always innovative and full of improvisation that hardly any loopholes can be detected.

The Seagram has been roping Saif Ali khan along with famous cricketers like MS Dhoni, Yuvraj Singh, Harbajan as its brand ambassadors and staging some music performance promoting music and CDs followed by their tagline “It’s your life. Make it large.” Or with a typical clichéd taglines (gender oriented) like “Men will be Men”.

Social medias have also become latest avenues for alcohol brands that established their brand expression, like Kingfisher has a Facebook Page, Twitters and Foresquare to promote their brands  and as far as regulations are concerned, these areas are yet to be covered.

So another aspect which plays a very innovative role is the social media marketing which is one of the out of the box marketing strategy and reach out the target customers directly. 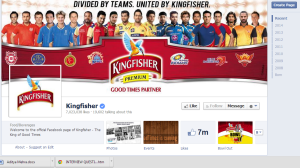 The Ex-union Minister Mr. Anbumani Ramadoss had challenged the name of the Bangalore Indian Premier League (IPL) cricket team “Royal Challenger” (an obvious and blatant form of surrogate advertising for liquor brand “Royal Challengers” and when the matter went to the Supreme Court  , the Court held of the observation in a lighter vein , alluding the fact that the team was not named ‘Royal Challenge’, the liquor brand, but “Royal Challengers” and that “Only those who drink can be attracted to these things” . Thus the IBF (Indian Broadcasting Foundation) has started to take on the surrogate liquor advertisements and it was ruled that if liquor companies promote any juice, mineral water or soda, which should be shown in a proper manner and not as trimmings to liquor. But the stark reality is that the liquor companies hardly do so. They might promote apple juice but the acts reflect as if it’s a liquor act and it creates a different impression in the minds of the viewers.

The banning of the surrogate advertisements have become the most complex and controversial issues and has been regarded as one of the “Proxy Wars”.

The producer companies feel that while the government allows them to do business on the one hand and taxes a huge chunk of their profits and takes it as its revenue, it does not allow them to conduct their business in a profitable manner on the other hand by banning one of their most important weapons of increasing sales ‘advertisement’. However, some analysts are of the opinion that the ban has in fact turned out to be advantageous for domestic players. According to a WTO agreement signed in March 2001, MNC’s had unrestricted license to sell their products. After the ban, these MNC’s would not have access to the quickest and most effective form of advertising – the TV, so the new brands that are there even in the market would not be widely popular and hence the already existing domestic brands will be under less of a threat of losing their market share. The ban on surrogate advertising has affected even media companies, as they have lost a substantial revenue generating client base as a result of the ban. According to broadcasters, the government should put in place a ‘reasonable’ policy, which somehow strikes a balance between the social and monetary aspects of the business which are engaged in the tobacco and liquor industry.

Since the liquor cannot be advertised , the companies are up to circumvent the rules by launching eponymous lines of unrelated products, such playing cards, soda or aftershave which are heavily advertised.

The question keeps on popping on our heads is that –should surrogate advertisements be banned?

It is argued by many that banning of the advertisements will be a financial loss on the part of the business companies. Like in one of the articles in the Economics Times it has argued by the author that-

“Some of the most ongoing arguments against alcohol / tobacco and surrogate advertisements on television are that they glamorise which of course they often do —  the advertisements for cars, sprays, bikes, instant coffees. However we do fail to understand the fact that the ban will also put the domestic industry players at a disadvantage to their international counter parts , enjoying free access to communicate on television channels uplinked from outside India and seen in the country by a very wide cross section of the population.

The existence of a surrogate assumes the presence of an original. Awareness that an advertised brand represents surrogate communication acknowledges that the consumer is aware of the original brand and the product it represents.”

Only then, can we judge the alternative product communication as being surrogate. If awareness for the original already exists, why there is unnecessary debate about surrogate advertising?

Clearly, therefore, the appropriate response to managing the ethical issues involved in surrogate advertising can only emerge from self-regulation by the industry that deals with products and services, which may appear to impact social behaviour in unacceptable ways.

Lastly, it may be worth recognising that there could be a major loss in revenue — both to Industry and government, if communication supporting advertising of liquor and alcohol products were to be banned.

A recent article in the national economic press had the following comment: “The ban on liquor advertising has already rendered a heavy blow to the advertising agencies. Ad agencies in the country are expecting a hit of around Rs. 400-500 (approx) crore following the government move to ban liquor advertisements.

Recently, industry’s representatives and the government have worked out a voluntary Code of Conduct for Advertising of alcohol and tobacco products. This is a positive step in the direction of self-regulation, and can provide an enduring resolution to the several issues that the surveyors of “socially relevant” communication present.”

It seems that this will remain to be a never ending debate when it comes to surrogate advertisement and its control. On one hand where there is inducement of having liquor, on the other hand it’s all about the certain upcoming international brands which can’t be stopped at all. What we need is proper regulation and not just mere regulations but also the ‘fine system’ must be introduced and proper licensing must be brought into the phase to regulate the ad agencies and in case if there is any portrayal of “surrogate products” one can always go to consumer forum and later the matter can be taken up by any Board and decide it accordingly.