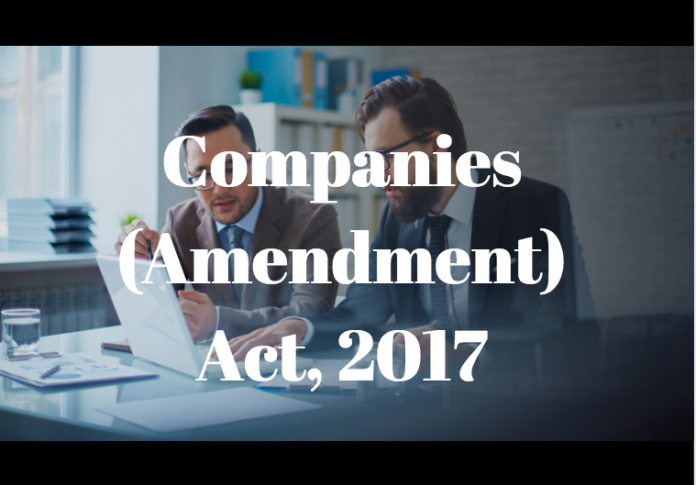 In this article, Aarthi S, pursuing Diploma in Entrepreneurship Administration and Business Laws from NUJS, Kolkata discusses on important takeaways from the Companies (Amendment) Act, 2017

The Companies Law Committee (“CLC”) was constituted by the Ministry of Corporate Affairs (MCA) in 2015 to submit recommendations on the functioning of Companies Act, 2013. The CLC submitted its recommendations in a report on 1 February 2016. (see here) The Companies (Amendment) Bill, 2016 was not approved by the Parliament but on subsequent presentation in 2017, the Companies (Amendment) Act, 2017 (“Amendment Act”) (see here) was passed upon approval of the Parliament and assent of the President on 3 January 2018.

The provisions of the Amendment Act are to come into force on different dates that the Central Government may appoint by notification in the Official Gazette. The Amendment Act makes significant changes in the Companies Act, 2013 (“the Act”) with a view to inter alia facilitate ease of doing business in India.

According to World Bank’s Ease of Doing Business Index, India has been ranked at 100 out of 190 nations, moving up 30 places from its initial position. Therefore, this amendment will foster prominence of India’s role in the global economy.

This article aims to discuss 5 key takeaways from the Amendment and the impact that it has on the corporate sector.

Section 185 embodies the provision related to grant of loans to directors. The erstwhile section prohibited a company from granting loans, guarantee or securities to any of its directors or other persons to whom the director is interested.

The purpose behind the introduction of the provision is to ensure that persons who hold a fiduciary relationship with the company, such as directors do not misuse their powers by facilitating loans towards themselves or companies they are interested in so that any conflict of interest between the company and directors can be avoided. The CLC observed the provision to be highly disproportionate as the overarching effect of this provision is not restricted to the intent behind its enactment.  Company laws across the world do not contemplate for such restrictive provisions on the grant of loans to directors. If the shareholders themselves approve of such transactions regarding utilization of their funds in a certain manner, the law need not be overly restrictive. The CLC acknowledged on the one end that this provision obstructed genuine transactions between a holding company and its wholly-owned subsidiaries with common directors and that at the same time this route was adopted to draw off funds by controlling shareholders. Therefore, a middle ground was adopted by relaxing the provision with increased safeguards.

On this pretext, the section has been replaced in its entirety. The new section is divided into 4 parts.

Therefore, the amended provision is partly prohibitive and partly restrictive as opposed to the erstwhile provision which was prohibitive in entirety.

Section 42 of the Companies Act, 2013 primarily governs the private placement of securities. The procedure has often been criticized for being time-consuming, cumbersome and requiring elaborate and sensitive public disclosures. Although the purpose of the provision was to prevent the grave misuses of the earlier private placement procedure under the Companies Act, 1956 yet the CLC recommended substantial changes to the provision to simplify the procedure. Private placement has now been defined under section 42 as “any offer or invitation to subscribe or issue of securities to a select group of persons by a company (other than by way of a public offer) through private placement offer-cum-application, which satisfies the conditions specified in this section.”

Some of the key changes are:

Section 194 and 195 of the Act were penal provisions which prohibited forward contracting of securities by directors or Key Managerial Personnel and insider trading of securities respectively. These provisions applied to both public and private companies. Additionally, these provisions have been covered under SEBI regulations as well. Certain jurisdictions have justifiably included insider trading prohibitions in their company laws as well, in addition to their securities law owing to the fiduciary duty of directors and KMP who may abuse this duty furthering their interests over the best interests of the company. However, the CLC noted, given that private companies do not have marketable securities affecting trade on the stock market and the insider trading prohibitions being unwarranted, adversely affecting capital raising activities, causing hindrances to the right of first refusal of shareholders etc. these provisions have been omitted. It is now comprehensively governed by the SEBI Act and corresponding SEBI regulations.

This omission has 3 essential implications. Firstly, forward contracting and insider regulations do not apply to private companies and public unlisted companies. Reading section 12A of the SEBI Act with Rule 3(1) and 4(1) of  SEBI (Prohibition of Insider Trading) Regulations, (“PIT Regulations”) the insider trading norms only apply to ‘securities that are listed or proposed to be listed.’ Secondly, an appropriate authority for investigating and prosecuting insider trading has been streamlined. Prior to the amendment, SEBI ( under section 458), the Registrar (under section 206 or 207), Central Government (under section 210) and NCLT (under section 222) were bestowed with overlapping powers to deal with insider trading under the Act. However, reading Regulation 10 of the PIT Regulations with section 15G and 15I of the SEBI Act, the authority for prosecution of insider trading offences lies with SEBI. Thirdly, jail term as a penalty for insider specified in section 194 and 195 of the Act has been done away with. As per section 15G of the SEBI Act, the only penalty is a monetary penalty of 25 crores or thrice the amount of profits made out of insider trading. However, a general provision namely, section 24 of the SEBI Act can be invoked for imposing imprisonment if the provisions of the Act are contravened.

Beneficial interest in a share has been defined to include directly or indirectly the right of a person acting individually or together with other persons to exercise or cause to be exercised all or any of the rights attached to a share or receive or participate in any dividend or distribution in respect of such share.

Significant beneficial owner (SBO) has been defined to mean individuals acting alone or together (including trusts or person resident outside India) who hold a beneficial interest in not less than 25% of the shares of the company or have the right to or actually exercise significant influence or control over the company.

Test of materiality to determine the pecuniary relationship

The section now lays down that an independent director must not have the aforesaid pecuniary relationship exceeding 10% of his total income or such other prescribed amount and excludes remuneration as such director.

Pecuniary relationship of relative of ID made more specific

The CLC noted that the requirement under section 149(6)(d)  for an independent director’s relatives do not have “pecuniary relationship” with the company, its holding, subsidiary or associate company or its directors or promoters in the two immediately preceding financial years or the current financial years is to be made more specific by categorizing the types of transactions.

The pecuniary relationship after the Amendment now means:

Relative of a director as KMP or employee in the company

The erstwhile section 149(6)(e)(i) restricted the appointment of an individual as an independent director if his relative is or was a KMP or employee of the company (or its holding, subsidiary, associate company) in the preceding 3 financial years. The CLC noted that a relative of the independent director operating at a lesser level in the company in comparison to a director or KMP in the preceding years would not impact the independence of a director and was hence recommended to be done away with.

A proviso has now been inserted to the clause which lays down that if the relative is an employee in the company (or its holding, subsidiary, associate company), the restriction shall not apply to his employment in the preceding three financial years.

The amendments brought about through the Companies (Amendment) Act, 2017 is with the aim to provide ease of doing business in India. These changes including the ones explained above facilitate the said purpose and are likely to help our nation secure a more prominent role in the global economy.