This article is written by Gaurav Dadich, pursuing a Diploma in Intellectual Property, Media and Entertainment Laws from Lawsikho.com.

Well, initializing the patent process is considered to be acoustically cumbersome not only that but also to maintain the Patent Portfolio requires the umpteenth time precaution of not disclosing backlog research or formulation or method or process.

What is a Patent Portfolio?

Patent Portfolio is a collection of patents owned by a single entity, such as an individual or corporation. While many people find managing a Patent Portfolio as a chore, the companies involved in owning the Patent Portfolio keep the momentum of buying, selling, licensing, assigning and monetizing patents strategically.

Can someone sell a Patent?

The monopoly rights granted to the patentee for the product invented by him include the right to make, use, exercise, sell, or distribute the invention.

A patent is a property right and hence, it can be gifted, assigned, sold as well as licensed.

According to Section 68 of the Indian Patents Act 1970 provides for the mortgage of, license or creation of any interest in the patent.

“Assignments, etc., not to be valid unless in writing and duly executed.1 —An assignment of a patent or of a share in a patent, a mortgage, license or the creation of any other interest in a patent shall not be valid unless the same were in writing and the agreement between the parties concerned is reduced to the form of a document embodying all the terms and conditions governing their rights and obligations and duly executed.“

To exemplify the practicality of selling a patent, I have enlisted the two landmark case studies.

According to the teachings for years, the American icon, Thomas Edison, neither invented the light bulb, nor held the first patent to the modern design of the light bulb.

The actual man behind the light bulb innovation was Joseph Swan, a British inventor, obtained the first patent for the same light bulb in Britain one year prior to Edison’s patent date. Swan even publicly unveiled his carbon filament light bulb in Newcastle, England. It was said that Edison shocked the world with the announcement that he invented the first light bulb.

Swan took Edison to court for patent infringement. The British Courts stood by their patent award for the light bulb to Swan, and Edison lost the suit. The British Courts forced Edison, as part of the settlement, to name Swan a partner in his British electric company. In the United States the Patent Office also ruled that Edison’s patents were invalid, because he based them upon the earlier art of a gentleman named William Sawyer. Ultimately Swan sold his patent to Edison.

The business of selling patents has evolved in the last few years and the astounding effect of this is sometimes regarding selling and re-selling astonishes the stakeholders in the market.

One such case story of Google exactly demonstrates what I have stated in the above mini paragraph.

Anyway, the most prolific chore was that, why Google sold the Motorola Mobility to the Lenovo, (a Chinese company) in the incredibly cheapest deal of $2.91B in 2014. But the twist to this case study is that and it is hard to digest for a layman why any company would sign a deal in a loss when he has just bought it two year back.  The response to this dilemma is that Google didn’t sell off the whole company, Google has kept back some of the assets- including patents.

If I have to make it long story short- Google has kept the major patents of Motorola Mobility which are creating value in terms of product likewise Android upgraded system now.

In the Indian Patents Act, 1970, three requirements should meet to constitute a patentable product:

The present Patents Act, 1970 came into force in the year 1972, amending and consolidating the existing law relating to Patents in India. The Patents Act, 1970 was again amended by the Patents (Amendment) Act, 2005, wherein product patents were extended to all fields of technology including food, drugs, chemicals and microorganisms.

The Indian Patent Act, 1970 was amended in 1999, 2002 and finally in 2005 to provide for product patents in chemicals, pharmaceuticals, food and agro-chemicals and being in other necessary amendments in line with Trade Related Aspects of Intellectual Property Rights (TRIPS).

The Patent Cooperation Treaty (PCT), administered by the World Intellectual Property Organization (WIPO), provides the applicant form a member country, the facility for filing a single international application for grant of patent in all the PCT member countries.

The Indian Patent Office (IPO) was recognized as International Searching Authority (ISA), and International Preliminary Examining Searching Authority (IPEA) under the PCT and started functioning as ISA and IPEA from 15th October 2013. As per requirement for ISA/IPEA, IPO has access to the comprehensive collection of patent and non-patent literature in order to fulfill PCT minimum documentation requirement, integrated search platform IPATS to enable one click search through the vast collection of information and professionally qualified and skilled examiners. IPO has also established the quality management system to monitor the ISA/IPEA reports. Fully electronic processing system ensures speedy disposal and dissemination of information real time basis.

What are the Authorities concerning patents in India?

Generally, if you would ask people why they build portfolios they would probably answer that to enforce against a competitor we build Patent Portfolio.  This answer practically does not make any sense for startups for the reason being it takes an enormously long time to get a patent around 2-3 years to actually bring a patent infringement lawsuit on the expense of around 3-5 million dollars probably at the below end and not too many startups have that kind of cash flow.

[Explanation– Joint Development Agreement (JDA) between Multinational company(MNC) and small startup, here if in agreement you mention the terms regarding maintaining Patent Portfolio on behalf of  Small Startup, then it would leverage you to prevent against the MNC’s to acquire the Patent Portfolio in future.]

According to the CLEARIP analysis claims, the International Business Machines Corporation (IBM) with a clear estimate of $9,578,405,537.69, whereby, the change in percentage is around 0.11% increment by the previous year.

To know about the complete list of 50 Patent Portfolios, I have pasted the crystal screenshot that can be accessed below: 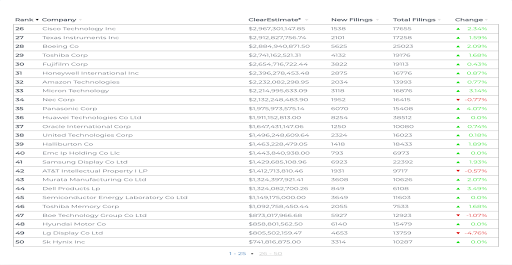 To access the Indian Annual Report, click here for the detailed analysis of the Patent grant in the year 2017-2018.

The number of applications for patents filed in 2017-18 was 47,854 showing an increase of 5.3 % in overall filing, which were 45,444 in 2016-17. During the year, filing of applications has shown a modest to high growth in almost every field of technology, except in the fields of Computer /Electronics, General Engineering, Polymer Science & Technology and Metallurgy & Material Science, which witnessed a marginal decrease in filing as compared to the last few years.

Sale of the Patent Portfolio

Likewise, in the real estate business the role of brokers is to mediate the deal between the seller and the buyer. Throughout the process, the broker is negotiator on behalf of both the parties and for that process the broker charge specific amount depends on the valuation of the real estate.

Note- Section 53- Term of patent— (1) Subject to the provisions of this Act, the term of every patent granted, after the commencement of the Patents (Amendment) Act, 2002, and the term of every patent which has not expired and has not ceased to have effect, on the date of such commencement, under this Act, shall be twenty years from the date of filing of the application for the patent.

Well, this particular topic deserves to be a subject for the next article, which I’ll be publishing someday so that it does not divest the interest from the current Topic. Any way I have enlisted some current valuation methods in bulletproof points which are generally used in the patent market.

How does it get evaluated?

To know more about the Patent Portfolio Valuations, the World Intellectual Property Organization (WIPO) has provided extensively researched analysis, which you may find here.

On the provision of Secret sale of Patent in the US

In US Supreme court, Helsinn Healthcare S.A. v. Teva Pharmaceuticals USA, INC., on January 22, 2019 held that the patent protection lose by the inventors for their inventions which they had sold or offered to sell more than a year prior to the submission of the patent application – even the sales were confidential and did not publicize the inventions details.

The petitioner filed four applications out of which the last one filed in 2013, that covers a fixed dose of 0.25 mg of palonosetron in a 5ml solution (‘219) and covered by the Leahy-Smith America invents Act (AIA). In pursuant to that, in 2011 respondents sought approval to market a generic 0.25 mg palonosetron product which resulted in the petitioner suing the respondents for infringing their patents including the ‘219 patent. The respondent countered stating that ‘219 patent invalid under the “on-sale” provision of the AIA [35U.S.C. 102(a)()1]. Because 0.25 mg was “on-sale” more than a year before the petitioner filed the provisional application in 2003.

The Supreme Court confirmed the Federal Circuit stating that, under the AIA, an inventor’s sale of an invention to a third party under a confidentiality agreement qualifies as being “on-sale” for purposes of barring a patent on that invention.

Further, an inventor’s sale of an invention to a third party who is obligated to keep the invention confidential can qualify as prior art under §102(a).

In the case of Communication Components Antenna Inc. v. Ace Technology Corporation (2019), the plaintiff company is a Canadian company manufacturing and selling cellular base station products, and services related to the telecommunication industry. The plaintiff filed an infringement suit against the alleged infringer Ace Technologies Corp, the defendant.

The detailed specification of the plaintiff’s patent states that the patent was for a novel antenna having a unique feature i.e. an asymmetrical beam pattern.

A single judge bench, Justice Pratibha M Singh, primarily on the first inkling of the case passed an order directing the alleged infringer to make an interim deposit of approximately Rs. 54 crores to be able to carry on with further sale of the manufactured products through the Patent in question High Court Registry and further directed by the court that if the alleged infringer does not comply with interim order, shall be prohibited from activities such as manufacturing, selling or offering for sale any such products which are manufactured through the suit patent.

Understanding the locus standi in Pubg corporation vs. NetEase inc