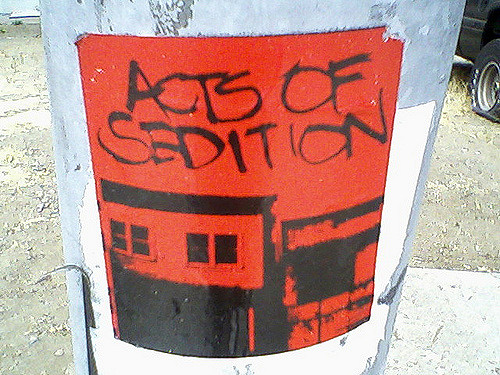 This article on the topic of sedition is written by Rishab Chaudhary from Symbiosis Law School, Noida.

India, with a population of over 1 billion is said to be a sovereign socialist democratic republic nation. It fosters a history of independence, which was attained over 69 years ago. The constitution of India, which serves as an intrinsic backbone to every other law of the nation, was formulated with an aspiration so as to seize the essence of freedom from every facet of life in a free country. Hence the constitution, which is also, the soul of the nation was created, to protect the rights governing the life of an individual and also to see to it that no individual or public at large gets inflicted with dominance of any law or order, which clearly leads to the violation of such rights.

But there have been various laws which have tried to creep on the basic foundation of the constitution and many have also been dealt with but few still remain operational. One such law is the law regarding sedition, which is governed under Section 124 A of the Indian Penal Code. The grievous nature of Section 124A is seen in the aspect of the punishment associated with it. Section 124A is a cognizable (arrests can be made without a warrant), non-bailable and non-compoundable offence. Punishment for the offence can extend up to life imprisonment. Due to the grievousness of the offence, courts are often hesitant to grant bail. Sedition law is viewed as an element of anachronism in many countries including the United Kingdom, and it has been removed in major Western countries. Lord Macaulay while formulating the draft for Indian Penal Code, 1860 included a provision to give soul to sedition but due to some unaccountable reasons when it was enforced in 1860 this particular provision was not included in the Code. In 1870 the British colonial government felt the necessity to add this provision and prominent freedom fighters such as Bal Gangadhar Tilak and Mahatma Gandhi were accused under it.

The law regarding sedition was formulated by the Britishers during the time they ruled India so as to control freedom fighters who were at that time creating an uproar to free India from the claws of the British. But now the following law has gained popularity for being devious and contentious. From writer-activist Arundhati Roy to cartoonist Aseem Trivedi and now these Kashmiri students, this law is a double-edged sword that can be offensive at times and can fall under freedom of speech in some other cases. India is the world’s largest democracy. The sedition law acts as a penumbra in its implementation as it gives the government an upper hand, citizens are expected to refrain from criticizing the governance, which leads to the misuse of law and hence serves as a failure of democracy in India. The country which holds a proud tag to be the largest democracy is not at all a complete democracy, cause if there is any democracy left political parties use it to win elections and very vividly favor it but when the same intrinsic right of the society is used so as to speak up clearly about the authority, people then are expected to just appreciate the governance. I am against the sedition law, because it endangers anyone who is trying to pick up the flaws in current state of affairs. The calmness that this law wants to maintain in our society has a very thin line relationship with the righteousness, which every citizen wants to be proud of. So, why isn’t a clause added to stop the propagation of ill feelings based on falsehood?

However, in spite of the Apex Court limiting the field of sedition and despite of the more nearly formulated tests to ascertain when mere speech or expression can be prosecuted, governments have periodically used Section 124-A with a need to restrict even minor forms of dissent. To go against sedition does not mean to argue in support of absolute free speech. That words which straight away excite violence or which straight away threaten the consistence of public order deserve censure is unquestionable, especially given India’s constitutional structure. At its base, it is an exploding provision that is meant to assist in ceasing all opposition to the ruling dispensation. Its power prevails to have the effect of free speech and expression in India. Section 124-A of the IPC negates the right to dissent, which is an essential condition of any reasonable government. Viewed thus, it is Section 124-A that is “anti-nation”, that is negative to the idea of a legitimate, liberal democratic state.