In this article, the author Akanksha Yadav, a student at Dr. Ram Manohar Lohiya National Law University, Lucknow gives an overview of torts relating to marital rights. The article mentions the leading case laws on spousal consortium followed in India and has differentiated between similar rights that are available under criminal law.

Torts relating to marital rights is one of the aspects of the term loss of consortium. Loss of consortium means torts where a tortfeasor causes deprivation of the benefits of a family relationship. It is to provide compensation to the spouse or the members of the family by the defendant in a case where personal injuries have occurred to another spouse or family member. This right originated in the 18th century when a father was compensated by a man who courted his daughter, due to which instead of doing household services, she was spending time with that man.

Torts relating to marital rights was based on the principle of per quod servitium et consortium amisit which means “in consequence of which he lost her servitude and sex”. It protects the rights of the husband against personal injuries suffered by him, depriving him of company or association with the spouse.

What are the Torts relating to Marital Rights?

Torts relating to marital rights are rights which provide immunity to spouses against the third party for a variety of actions which leads to interference with the marital relationship. Torts relating to marital rights protect the deprivation of sexual relationship and also includes loss that a husband or wife suffers due to deprivation from care, affection, and companionship of the other spouse. These are categorized under the two main categories, which are explained below:

What are the kinds of Torts relating to Marital Rights?

There are three kinds of torts covered under torts relating to marital rights which can be committed by a third party. They are as follows:

Under the common law system, a husband has been provided with the right to act against any person who either forcefully or by fraud takes away his wife. A husband has also been given the right to sue if a person entices or persuades his wife to live away from the husband in absence of a sufficient cause. The real point of an action lies in loss of consortium of the wife, giving the husband an exclusive right against the tortfeasor who has invaded to the wife’s aid, affection, and companionship. In all suits, the principle of per quod amisit serves as a basic ground which compensates the husband for losing the benefit of wife’s society i.e. her companionship and all the relations husband has got after marrying her.

The right of the consortium is a mutual right which is equally available to both husband and wife. Either a wife or husband can invoke this right, if one of them is deprived of the benefit of another spouse’s society where society means companionship and all the relations related to a spouse through another spouse. For example, the wife under her right of loss of consortium can sue the defendant for deprivation of the benefit of the husband’s society i.e. his companionship and all the relations related to wife after marrying him. 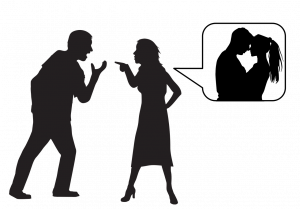 During the medieval period, under the writ of trespass, adultery was maintainable. The action of adultery during the medieval period was known as the action for criminal conversation. After the enactment of Divorce and Matrimonial Causes Act, 1957, the action under the writ of trespass was abolished. Now, a husband has to claim damages for the adultery under the Divorce and Matrimonial Causes Act, 1957. A husband can either make a claim for damages either in a petition for judicial separation or in a petition demanding only claim for damages for adultery. A wife does not enjoy the same right and has not been given the right to bring a suit against the wrongdoer for claiming damages with regard to adultery committed by her husband.

Under the principles of common law, damages inccured criminal conversation were awarded without requiring any proof of alienation of affection in the marital relationship.

Causing Physical injuries to the  Wife

Under the common law system, a husband can bring an action against the tortfeasor for any physical injury caused to his wife by the actions of the tortfeasor. If due to maltreatment of the tortfeasor, the husband is deprived of companionship and assistance of his wife for any time period, the husband has the right to get a separate remedy. A wife can also sue a tortfeasor if an injury is caused to her and due to that injury her husband loses the benefit of her society and service which is also known as consortium et servitium. She can either claim damages under a single suit or she can file two different suits for claiming damages.

In case, the wife dies due to the wrongs by the tortfeasor, the husband can claim damages for the death of his wife under the Fatal Accidents Act. The husband is awarded compensation as he loses the services and society of his wife. The only condition that needs to be fulfilled is that the husband and wife should not be living separately from each other while the action of tortfeasor occurred, otherwise no compensation will be awarded.

This right was earlier limited to the husband only but with the passage of time, the Court has recognized similar rights available to the wife under the loss of consortium.

The one who suffers an injury is known as the victim spouse and the other claiming damages is the claimant spouse. There are three basic ingredients to be fulfilled by the claimant spouse for getting compensation under the torts relating to marital rights:

Are these rights available to the cohabitants who reside together without having a valid marriage?

Earlier law was very strict and it provided immunity only to legally wedded spouses. In 1977, in the case of Tong v. Joseon, the California Court continued the practice of recognizing the rights of married spouses only and rejected a claim made by the impaired partner who was not married to the victim girl at the date of the injury.

But with change of time, there have been several claims from the cohabitants who though are not legally wedded but are residing together. In 1980, in the case of Bullock v. United States, the Court of New Jersey overruled the old holding and held that a deprived cohabitant should not be restricted from getting damages for a tortious act which cause interference in the ongoing cohabitant relationship.

Liability of Tortfeasor in transfer of Venereal Disease

In cases, where a claimant spouse acquires any venereal disease from the other spouse who has acquired it from the third party, the third party is liable to the claimant spouse. In Mussivand v. David, a wife transferred a venereal disease to her husband which she had acquired from her lover. The Court held that the lover of the wife will be liable to the husband for transmitting the disease to him. The Court specifically stated that the lover would not be held liable if the wife in advance was aware of the disease of the lover.

Under the English common law, torts relating to marital rights were recognized. In Baker v. Bolton, a husband was awarded damages for his wife’s injuries due to a carriage accident until she did not die. Even after the enactment of Lord Campbell’s Act, the English legal system continued not to recognize the injuries caused by death. In the middle of the 19th Century, Illinois enacted a new act for wrongful death which allowed the next of kin to sue a person for causing the death.

In Parker v. Dzundza, the Court held that there will be no compensation awarded to the spouse if the relationship between husband and wife was already severed by divorce.

In India torts relating to marital rights are covered under the spousal consortium and is majorly invoked in the compensation under the Motor Vehicles Act or in divorce proceedings with respect to adultery.

Why Torts relating to Marital Rights are important?

Torts relating to marital rights are important due to the aura given to the relationship between a husband and wife. Marital relation has always been held worthy of getting legal protection. It protects the interest of a husband and wife against any injury caused to the physical integrity of his or her spouse. It compensates for the deprivation of financial contributions by the injured spouse in the household, affection, and sex caused by the injuries of the tortfeasor. For example, X injures W’s husband H in an accident, W can get compensation to recover the damages X has caused by injuring H; damages may include: H’s monthly pay which is being cut off because he is not going to work due to injuries caused, deprivation of affection and sexual relationship which W would have got if H was not injured etc.

Are there any Marital Rights which are covered both under Civil and Criminal law?

Yes. In India, for all the above-mentioned torts relating to marital rights, a person can institute a suit in the criminal court of law except for adultery. Adultery has been abolished as a criminal offense by the Supreme Court in September 2018 in the case of Joseph Shine v. Union of India.

Difference between rights given under Civil law and Criminal law

Preference to civil or criminal right?

Under the criminal law, punishment for the offense is given in the form of fines, imprisonment and the other form of penalties which would not benefit the claimant spouse. Whereas when a spouse brings an action in the civil court of law, the claimant spouse will be awarded for damages in the form of compensation. Therefore, a spouse should always bring an action against the third party for the interference in the civil court of law if compensation is the priority.

Torts relating to marital rights play a major role in providing justice to a husband for deprivation of sexual relationship or companionship of his wife due to the wrongdoings of a tortfeasor. Earlier it was limited only to the rights of the husband. But with the evolution of law, Courts have recognized similar rights for the wife as well. In India, both the husband and wife avail similar rights under spousal consortium which majorly covers the accident cases under the Motor Vehicles Act. Therefore, it can be concluded that torts relating to marital rights overcoming the patriarchy concept have established equal right for the absence of companionship and services of the other spouse.