In this article, Rohit Upadhyay pursuing M.A, in Business Law from NUJS, Kolkata discusses the procedure for transfer of a case from one court to another.

The judiciary has been paramount institution for determination of any legal dispute. The judiciary has been a watch dog to keep an eye on the legislature and executive authorities to control their arbitrary actions and to keep a check on their activities which may be either driven by their whimsical or by any hidden interest. The judicial authorities are vested within various courts and at many levels as deemed to be proper by the respective High courts. The Indian judiciary has a huge extravagant burden on its shoulder of pendency. In a broader classification, the trails could be separated in two classes namely-

The Civil laws are the laws which relate to disputes between individuals, individual and a company, individual and an organization, or organization against any organization. The scope of the civil law is a wrong doer and against such wrong doing the court may award penalties or cost to the wrong doer and compensation to the victim who has suffered any unwarranted loss due to such behavior. In civil law, the burden of proof is leveled at the preponderance of probability, which means that both the parties of the litigation have to make their best possible effort to establish their case and then based on the level of prudence of the pleading the court would determine the case.

In civil law a case is instituted by the plaintiff against the defendant and ends up with a judgment. Either party who may be aggrieved by the judgment of the court may prefer and appeal against the order passed by the court. The punitive action of the civil law would in the form of compensation. The example of civil laws are Indian contract act, 1872, Civil procedure Code 1908.

Criminal wrongs are those which possess the potentiality of damaging the society at large. Generally, criminal acts are those acts which have an overall impact on the society and influence a major share of the society with its occurrence. The criminal law covers all the offences and crimes under different laws and statutes. The criminal case against an individual may be instituted by a First information report (F.I.R) or by presenting a private complaint against a person. Whenever a complaint is preferred to any magistrate he may after taking cognizance and observing any substance in the complaint may issue necessary instruction for further investigation and fact finding of the case. The burden of the proof in such criminal cases lies on the prosecution which is here referred as the state to establish its case far beyond reasonable doubt against the offender. In case if the prosecution fails to do that the benefit of doubt would flow towards the accused. The party which may be dissatisfied by the judgment of the court may approach the competent superior authority to file an appeal against the order of trail court. The punitive consequence of criminal law would be fine or imprisonment of may be even both the criminal court also have superior jurisdiction to order the offender to pay the victim against his crime as under victim compensations scheme. The example of criminal laws are Indian Penal Code, 1860, Criminal procedure code, 1973, Narcotic drugs and psychotropic substance, 1985

Objective for transfer of cases in courts

The entire judiciary is viewed with utmost respect and with an expectation that the judiciary would do very fair and equitable justice to the person coming before them or pleading for genuine redressal of any complaint of grievance. The court should always maintain a fair view that court should not only do fair justice but the justice should be pronounced in such a manner that a clear message should be made to everyone that justice is made. The judiciary is the most sanctified body to deliver justice and has always maintained a very strict view regarding fairness in trail procedures and trail fairness. So in order to protect the reputation of the courts and the maintain high order of moral standards between the members of judiciary the code of Criminal Procedure and the civil procedure code have enough reasonable grounds to transfer cases from one court to another court.

The main intention of delivering justice or to decide a matter is to address a public sentiment although there are various provisions regarding appeal. But such practices would impart tremendous pressure on the mechanism of judiciary and the judiciary would further be burdened with more pendency and delayed justice to all which may consequently create more dispassion and unrest about judicial processes. So to address all such burning issue the statutes already provides certain provisions regarding the transfer of cases from one court of trail to another court of trail.

The hierarchy of the courts is followed as per the table drawn below. 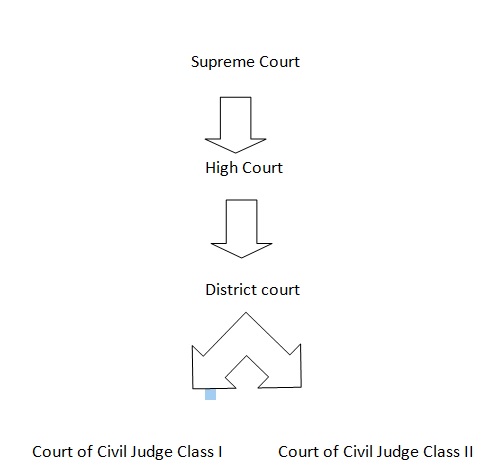 The civil procedure code, 1908 is a concise legislature to determine the litigation aspect and to determine the course to be adopted for trial. Section 15 of the C. P. C, 1908 provides that the every case should be filed in the lower court competent to try that matter. This avoids absurdity regarding the jurisdiction of maintenance of claim and place of filing claim.

Section 22 of the C.P.C 1908- Power to transfer suits which may be instituted in more than one Court.

When a trail is lying pending before a court and the same jurisdiction is shared by many other territorial or other court the defendant who may have objection to the jurisdiction of the place of trial of the court may after moving an application to all the relevant parties of the legislation may be given with an opportunity to be heard and argue and then the court may determine the merit of the case and order further instructions. In civil cases when the case is for obtain a specific possession of a property it is preferred to file the case within jurisdiction of the court under which the property or any other achievable of the defendant are available.

This section of C. P. C 1908  deal with the provisional part used to exercise this right hand how the application regarding  such transfers be made and whom to be made with such applications. As per the statute the application may be preferred to any court which is immediate superior to the trial court or the appellant court of that trial court. Subjected to following circumstances: –

When the appellant court is same:- when the suit is to be shifted or transferred to  court which have same court of appeal or under same subordination such transfer application would be preferred to appellant court.

When the appellant courts are different: – when both the courts of trial lies under different court of appellant jurisdiction. Then the application would be preferred to the high court under which both the courts are subordinate to.  The High court after observing the substance of the complaint would decide the application and dispose it off accordingly. The High court after receiving any such application from the applicant the court may even if require conduct an enquiry and then decide whether such transfer is in the interest of justice or it is filed with an intention to defeat the justice. If the grounds of filing such application are found to be false, frivolous or vexatious the court would dismiss the application. The Attorney general of the state may also file application of such transfer to the High court with an affidavit which on oath would again affirm the contents of the application. The trail court can also refer to the High court any such cases which may need transfer from one court to another to meet the ends of justice.

In sub ordinance to the High court the session court also have vested authority to transfer one from one court to another under his jurisdiction within his session division.  This order may be made b y the court for better delivery of justice and settle the sentiment of the victim. An application shall be preferred on following grounds:-

The grounds on which the cases can be transferred

The following are the grounds on which a case could be transferred from one court to another court.

The transfer of case from one court to another may not change the nature of the trail or the relief nor does it changes the subject position but with the addition of such provisions the legislature and the judiciary imparts a huge impression on the subject about the principle of equity and good conscience. Transfer of cases from one court to another would also ensure that the litigant parties are assured to the justice done to them.