This article has been written by Prince Pathak, pursuing a Diploma in M&A, Institutional Finance, and Investment Laws (PE and VC transactions) from LawSikho.

Trends for 2020 and overview

In the first quarter of 2020, M&A activity in North America totaled $400.8 billion, a 25.1% decrease from the first quarter of 2019, but the number of completed transactions climbed slightly to 3,169, a 2.6 % rise over the same period. A substantial part of the transactions entered into or completed in the first quarter are believed to have occurred before the world became aware of COVID-19’s public health threat. However, deal value increased across Europe. Outbound M&A dropped in Japan, while domestic deal value climbed by 60%, owing to a number of major transactions. With a 26% growth in deal value, the Asia region (excluding Japan) had the most overall growth. As travel restrictions altered deal-making logistics and nations fought to defend their borders, cross-border business fell 14.2 % in 2019.

If we talk about Private Equity (PE) Investment in the US, it has also experienced a sharp decline. By the end of 2020, US PE investment activity had reached $708.4 billion over 5,309 agreements, a 7.3% and 3.4% decrease year over year. This is the first year since 2009 that deal-making value and number have decreased. However, PE deals have slightly increased in 2021, and in the upcoming PE, deals will touch a new height.

The pharma, medical, and biotech (PMB) industry saw some significant acquisitions. According to the data presented by White and Case, “In total, there were 346 transactions targeting the sector in Q3, worth US$91.7 billion in total value—a 9% rise in value on the same quarter in the previous year, although volume dropped 20% over that time”

Despite the fact that M&A activity in the PMB sector decreased in the first half of the year, such deals suggest that the sector is becoming more optimistic. Despite the continuing uncertainty around the COVID-19 pandemic, big pharmaceutical companies with cash on hand are keen to close deals in order to diversify their portfolios and increase market share.

Technology was by far the most dynamic sector in the United States in 2019, and it was followed by Pharma, Medical, and Biotech. As the world moved into an online environment, technology was the winning industry for M&A activity in 2020, and also in upcoming years, technology and telecom transactions will dominate. In a year marked by a worldwide health crisis that no one could have foreseen, 2020 also set a milestone that few could have expected. Surprisingly, amid the pandemic global technology M&A deals reached $634 billion, a 91.8% year-over-year increase. Let’s look at some of the biggest M&A tech deals in 2020.

In contrast, major deals have concluded in 2020 amid the pandemic, and more are expected as the rise of technology M&A accelerates. According to an article published on mondaq by a leading law firm in the US, technology and pharmacy were the growing sectors in 2020 and also said that “While 2020 proved, even more than most years, that nobody can predict the future, we expect many of 2020’s M&A trends to continue into 2021. Much attention is focused on the pandemic, including the impact of vaccines, and questions also remain about the change in the U.S. administration and other issues. But equity markets are at record levels, PE dry powder remains plentiful (even without counting the surge in SPACs, as described below), debt is available, and acquirers are looking to strengthen their businesses and deploy their cash”. 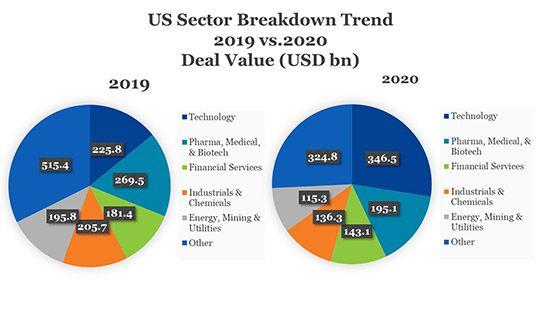 Hence, it is clear that M&A deals in the US M&A market have somehow survived and are expected to new heights. Let’s look at reasons or measures that US deal markers have adopted amid the pandemic and how well they are prepared for the future. And what are the changes adopted in key agreements relating to M&A?

3. Expanded due diligence- Buyers have expended due diligence; they use advanced sources such as virtual data rooms and pay more concern towards data security & privacy issues. Investors are digging further into a target company’s supply chains, employee health, insurance coverage, and other factors that are likely to be affected by the epidemic.

4. ESG (environmental, social, and governance) factors- Buyers and sellers are now considering the ESG factors. Environmental, social, and governance (ESG) concerns, such as climate change, confidentiality, diversity, and labor standards, are becoming more important to consumers and sellers. “Such considerations have gained traction in corporate governance in general, as seen by the Business Roundtable’s redefining of corporate purpose in 2019 to include responsibilities to customers, workers, suppliers, and communities, in addition to shareholders”.

5. Change in policy and Legislation- The federal government in the US has taken extraordinary efforts to help firms and their employees, creating possible liabilities that must be addressed in purchase agreements. “The Paycheck Protection Program (“PPP”), established in March by the Coronavirus Aid, Relief, and Economic Security Act (the “CARES Act”) and extended in the December 27 stimulus package, was the most notable of them. The PPP offers loans, primarily to small companies that are forgiven without repayment in certain conditions but must be returned otherwise”.

8. Massive attention in start-ups- Investors are becoming more interested in start-up firms, particularly those focused on digital products and services.

COVID has heavily overshadowed all parts of our life, including mergers and acquisitions. Companies have had to rethink and reassess their M&A strategy in the face of COVID, but deal activity is ramping up and will continue to do so in the New Year, although with some modifications. The US M&A market has undergone a roller-coaster year as a result of the COVID-19 outbreak. Technology and telecommunications were the most active sectors and received huge investment amid the pandemic. And when the pandemic broke out in early 2020, deal activity dropped, but it rapidly recovered. The recovery in the second half of 2021 will set the stage for even more expansion in the future. In upcoming times, deal activity is likely to increase.