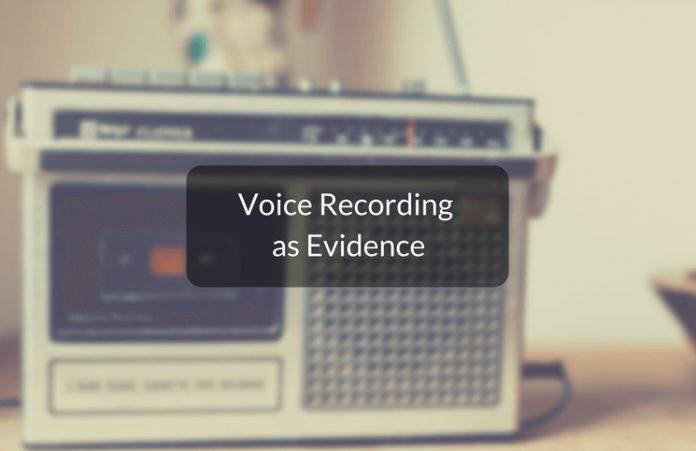 In this blog post, Anubhav Pandey talks about whether Voice Recording Can be used as Evidence in Courts in India.

Have you ever been threatened of criminal prosecution by someone having your audio recorded on their phone? Or on the contrary, do you want to take a person down in the court of law on the basis of audio recordings?

Here is a question to think about.

Does audio recordings have any evidentiary value in the court? If yes, what are the factors which determine its genuineness?

Here is a detailed article on whether a voice recording can be used as an evidence in court in India.

There is a heavy dependency of people on digital devices. These devices have helped to open a new era of jurisprudence. The portable devices are very helpful in recording things. Cases are flooded with the question of whether these electronic recordings (or a voice recording) are, from the point of view of the evidence, admissible or not.

Is Voice Recording Admissible in Court?

Its genuineness is in itself based on various factors –

What is an Electronic Record?

As per the provision of IT Act, electronic record means data, record or data generated, image or sound stored, received or sent in an electronic form or micro film or computer generated micro fiche.

Therefore, an audio recording comes under the ambit of electronic record and passes the first hurdle of its admissibility.

At times electronic records are taken into consideration as a relevant fact also.

An entry in any electronic record, stating a fact in issue or relevant fact, and made by a public servant in the discharge of his official duty, or by any other person in performance of a duty specially enjoined by the law of the country in which such electronic record is kept, is itself a relevant fact.

Therefore, if a police officer records something electronically, it becomes a source of fact as per the Indian Evidence Act.

When any statement of which evidence is given forms part of a longer statement, contained in part of electronic record, evidence shall be given of so much and no more of the electronic record, as the Court considers necessary in that particular case to the full understanding of the nature and effect of the statement, and of the circumstances under which it was made.

Laws regarding electronic record and their admissibility are properly laid down in Section 65B of Indian Evidence Act. The contents of electronic records may be proved in accordance with the provisions of section 65B. Therefore, in order to understand whether a voice recording can be used as an evidence in courts in India, an understanding of section 65B of Indian Evidence Act is necessary.

When Electronic Records are 5-Years Old

A tape-recorded evidence is admissible provided that the originality and the authenticity of the tape are free from doubt.

Likewise, Justice Sabyasachi Mukharji held that about the acceptance and reliability of evidence on tape-recording, one should proceed very cautiously and that in this connection on the analogy of mutilated document if the tape-recording is not coherent or distinct or clear, this should not be relied upon.[4]

What if there is an Electronic Voice Record?

These conditions are laid down in Ram Singh & Ors vs Col. Ram Singh as –

A voice recording provides a clear perspective of the view in the cases of coercion, bribery, threat or in any situation where the person has been mentally tortured via speech.

What do you think- Should Voice Recording be admissible in Courts? How it’ll affect the process of Justice? Drop your views in the Comments section & Feel free to Share.

If you want to learn more about CRIMINAL LAW, LITIGATION AND TRIAL ADVOCACY you can take up this course that is created by iPleaders in association with National University of Juridical Sciences (NUJS), Kolkata which is regularly ranked as one of India’s top three law schools