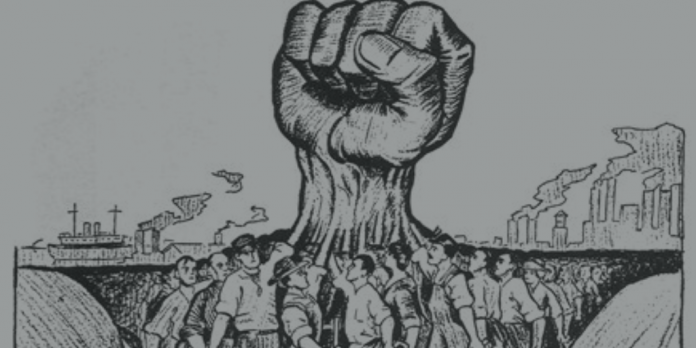 In this blog post, Abdul Kalaam Azad A.S., pursuing M.A. in business law from NUJS, Kolkata, discusses the concept and the need for trade unions and trade union-related laws prevalent in India.

The Trade Union Act, 1926 is the important law related to Trade Unions in India. Industrial revolution during the 19th century brought massive changes in England and other western countries. There are radical changes in every process of manufacturing, the method of production, shipping, etc.revolution, due to the IRevolution, which resulted in changes in the social life. Due to the scientific and technology developments in the Industrial sector, there was a tremendous growth in every society, that caused the emergence of two classes, namely the working class (wage earning class) and the Managerial Class (entrepreneur class). [1]These two classes had conflicting interests and were striving hard to achieve the same. The working class claimed higher wages and better working conditions while the entrepreneur class demanded maximum production at minimum wages.

The Industrial Development in Western Countries started reflecting in this vast country, but at a slow pace. The Trade Union movement in India has emerged due to Industrial Revolution, as a result of growing complexities of an economic structure of the country.[2] Due to the slow pace of industrial development in this vast country before the first world war, there was a very slow growth of trade union movements in India. Instability of labour force, lack of leadership, deprivation of freedom of expression during the British rule were also the reasons for the slow rate of growth of trade union movements in India.[3]

The first organised labour movement in India was in 1884 by N.M.Lokhande, who was a factory worker in Bombay who organised an agitation and convened a conference of workers to make representations to the Factory Commission appointed by the then British Government to study the conditions of the working class in factories.

The period between 1904 to 1911 brought in tremendous growth in trade unionism in India.[4] During this period, the Printers’ Union in Bengal, the Kamgar Hitwardhak Sabha in Bombay and Postal Clubs in Madras, Bombay and Calcutta were formed. Ahmadabad Textile Labour Association is an important federation in the history of trade union movement in India as this was the first federation of the different occupational unions in the Ahmadabad textile units. It was formed due to the inspiration from the father of the nation, Mahatma Gandhiji and had a close association with him. In 1920, the leaders of Indian National Congress, due to the necessity brought by the growth of Trade Unionism, founded the All India Trade Union Congress. It was the apex organisation with a hierarchical set-up across the nation at the provincial and regional levels and finally linking the individual unions. In the year 1920, the AITUC for the first time represented the Indian Labour at the International Labour Organization.

Shri. N.M. Joshi is the father of modern trade unionism in India, and he introduced the Trade Union Bill in the Assembly in 1921.[5] There was a struggle for legal recognition of trade unions in India during that time due to adverse conditions. The Government was reluctant to pass the bill and finally compelled to enact the Indian Trade Unions Act, 1926, due to heavy pressure from the political parties.

Before independence, the attitude of the colonial government was in favour of the foreign employer and to the protect the interest of British Business Owners. The British Colonial Government was acting mechanically in assuring minimum employment conditions to workers and deciding the merits of labour disputes. After independence, the Indian Government brought a fair deal to the working class and passed several labour welfare legislations conferring rights and benefits to the working class. The Factories Act, 1948, The Industrial Disputes Act, 1947, The Minimum Wages Act, 1948, The Payment of Wages Act, 1965, The Workmen’s Compensation Act, 1923, The Employees Provident Funds Act, 1952, The Maternity Benefit Act, 1961., etc were called “Welfare Legislations” as these legislations envisage welfare of workers.

A Trade Union is a voluntary organisation of the workers in a specific industry or occupation. Article 19(1)(c) of the Constitution of India guarantees freedom of association as a fundamental right and confers the workers, right to combine and organise for collective action or bargain. However, such a right is not available for a certain category of jobs. It is due to the reasonable restriction which can be imposed by the Government as per the provisions of the Constitution of India.

In various judgments of the Supreme Court of India and a majority of Industrial Tribunals, held that “a dispute raised by a dismissed employee/workman will not be treated as an industrial dispute, unless it is supported by a trade union, registered or not, or by a body or section of workmen”.[7] Hence, a trade union or a section or a body of workmen must represent a dispute to be declared as an Industrial dispute. Or else it will be considered as an individual dispute.

The main object of the Trade Unions Act, 1926 is to provide machinery for the registration, regulation and protection of the rights and privileges of the trade unions. The term ‘trade union’ used in this act is not confined alone to the workers’ union, but also includes employers’ association as well. The act also prescribes for what purposes the trade union may spend its general funds and also give provisions for creating a separate fund for political purposes. The main object of the act is to ensure industrial harmony. The members of the registered trade unions are protected from various civil and criminal liabilities and enjoy immunities and privileges.

What is a Trade Union? Meaning & Definition

Section 2(h) of the Trade Unions Act, 1926 defines Trade Union[9] as “any combination whether temporary or permanent, formed primarily:

A Civil Servants’ Union cannot be registered under the Trade Unions Act, 1926. In the case of Tamilnadu N.G.O’s Union vs. The Registrar of Trade Unions (AIR 1962, Mad. 2341)[11], the Madras High Court dismissed the appeal on the ground that, to get the trade union registered under the Trade Unions Act, 1926, the members of the union must be workmen engaged in trade, business or industry and the appellants in this case are not in that capacity, as they are civil servants engaged in the tasks of the sovereign government.

In the case of Registrar of Trade Unions, West Bengal vs. Mihir Kumar Gocho (AIR 1963, Cal. 56)[12], the Calcutta High Court held that employees of E.S.I. Corporation would come within the meaning of workmen and hence, they could be registered under the Trade Unions Act.

The Bombay Industrial Relations Act, 1946 and the state acts of Madhya Pradesh and Rajasthan have provisions making the recognition a compulsory process.[14] Once a trade union is recognized, the recognition cannot be withdrawn without complying with the rules of natural justice.

There are certain additional privileges and rights available for the recognized trade unions. Those are:

The Central Government gives recognition to Trade Union as Central Trade Union for the purpose of representing in the International Labour Organizations and International Conferences, if such trade union fulfils the following conditions:

The Central Chief Labour Commissioner is authorized to verify the fulfillment of above conditions.

Section 17 of the Act provides immunity from Criminal liability. According to this provision, the office bearers of the registered trade unions are immune from criminal liability for criminal conspiracy.

Section 18 provides immunity from civil liability. According to this provision, the leaders and office bearers of the registered trade unions are immune from civil suits in certain cases, viz. contractual liability, tortuous liability etc.

A registered trade union is entitled to maintain two kinds of funds. They are – General Fund and Political Fund. The Trade Unions Act, 1926 imposes certain conditions on the Trade Unions to spend/utilize the funds only for some specific purposes as stated under Section 15 (General Fund) and Section 16 (Political Fund) of the act.

Purposes for which the General Fund can be utilized:

Rights of a registered trade union:

Amalgamation and Dissolution of Trade Unions

Amalgamation can be as follows:

According to Section 24 of the Trade Unions Act, 1926, two or more registered trade unions may amalgamate together as one trade union with or without dissolution or division of the funds of such trade unions or either or any of the trade unions.

For the amalgamation to be valid, the following conditions must be satisfied:

The Trade Unions Act, 1926 is an important welfare legislation giving provisions for registration, regulation, benefits and protection for trade unions. As such legislations envisage welfare of workers, these are called ‘welfare legislation”.[26] In India, agreements between the Trade Union and employers are enforceable under Section 18 of the Industrial Disputes Act, 1947 by filing a petition in Labour Court or Industrial Tribunal.

Trade Unionism in India is of recent origin in India. During the British rule, the Trade Union movements were totally suppressed by the then British Government. Trade Unionism is accorded recognition in 1926 for the first time in India, with the passing of Trade Unions Act, 1926. In the recent years, Trade Unionism witnessed tremendous growth and development in India, not only in the Industrial Sector, but also in the agriculture and other allied sectors.