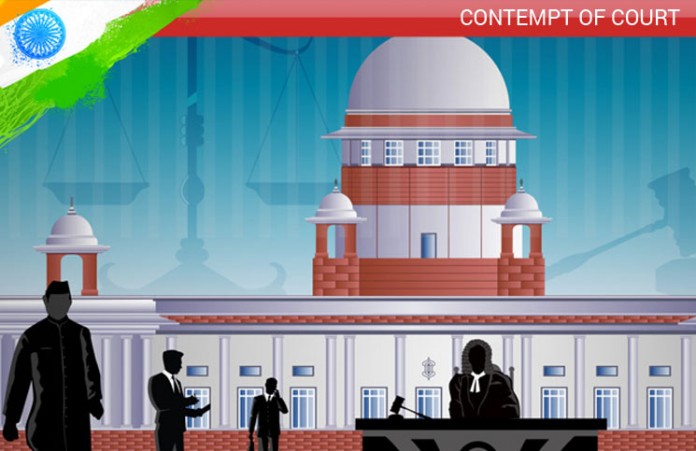 Contempt of court is any conduct that tends to bring the authority and administration of Law into disrespect or disregard or to interfere with or prejudice parties or their witnesses during litigation.

Categories of contempt of court

Contempt of court can be of two types, civil or criminal depending on the nature of the case. 1. Civil Contempt
Under Section 2(b) of the Contempt of Courts Act of 1971, civil contempt has been defined as wilful disobedience to any judgment, decree, direction, order, writ or other process of a court or wilful breach of an undertaking given to a court.

2. Criminal Contempt
Under Section 2(c) of the Contempt of Courts Act of 1971, criminal contempt has been defined as the publication (whether by words, spoken or written, or by signs, or by visible representation, or otherwise) of any matter or the doing of any other act whatsoever which:

Punishment for the contempt of court

High Court and Supreme Court are bestowed with the power to punish for the contempt of the court.

However, in civil cases if the court considers that a fine will not meet the ends of justice and that a sentence of imprisonment is necessary shall, instead of sentencing him to simple imprisonment, direct that the he be detained in a civil prison for such period not exceeding six months as it may think fit.
The court is not supposed to impose a sentence for contempt of court in excess of what is prescribed under this section either in respect of itself or of a court subordinate to it.
An accused may be discharged or the punishment awarded may be remitted on apology being made by the accused to the satisfaction of the court. An apology is not supposed to be rejected merely on the ground that it is qualified or conditional if the accused makes it bona fide.

Contempt of court by a company

In case the person found guilty of contempt of court in respect of any undertaking given to a court is a company, the person who at that time, was in charge of, and was responsible to, the company for the conduct of business of the company shall be deemed to be guilty of the contempt and the punishment may be enforced, with the leave of the court, by the detention in civil prison of such person.
However, that person can be exempted from liability if such person proves that the contempt was committed without his knowledge or that he exercised all due diligence to prevent its commission.

Clause (b) of Section 13 of Contempt of Court Act, 1971 that was introduced recently by 2006 amendment, allows the accused to raise the defense of justification by truth of such contempt, if the court is satisfied that it is in public interest and the request for invoking the said defence is bona fide.

However, no court shall impose a sentence under this Act for a contempt of court unless it is satisfied that the contempt is of such a nature that it substantially interferes, or tends substantially to interfere with the due course of justice.

Click on the below mentioned links to know more on the topic:

What Can Be Considered Contempt Of Court

Powers of an Arbitrator to Punish for Contempt