This article is written by Tarun Gaur, a student of Nirma University.

On Monday the NDA government assured the nation as well as the parents of the brave soldier that it is determined to break the general norms and will take the necessary steps in the march for justice for the Captain. Earlier the government contended that they seek the advice of the Supreme Court whether to proceed to International Court Of Justice , and on Monday the court said that the government should move to the ICJ for the justice for the Kargil martyr. 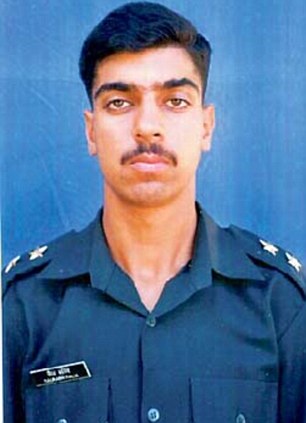 WHO IS CAPTAIN SAURABH KALIA?

Captain Saurabh Kalia; officer of the Indian Army of 4 Jat Regiment ( Infantry) was posted in the Kargil sector in 1999.  ON fateful night of 15 May 1999, Captain Saurabh and five other soldiers were patrolling mission when they were attacked by the Pakistani Rangers who had intruded into the Indian territory  and eventually when the Indian soldiers were out of armour were surrounded by the Rangers and were taken as Prisoners of War and were brutally tortured  for twenty-two days. Autopsy reports stated that the Pakistani had brutally tortured them by gouging their eyes, chopping  off their private parts and breaking their teeth and bones, burning their bodies with cigarettes before killing them and shooting them at their temples. The dead bodies were sent back to India.

It has been 16 years since the incident took place and many governments came and retired, but none of them did anything for the justice to the martyr family. They have been left helpless by the Indian Government, but now as the Indians unite as one to demand justice for the Captain, even the government has decided to take a u-turn and termed the incidence as an exceptional one and thus believe that they have valid reasons to move to the ICJ.

WHY IS THE GOVERNMENT HESITANT?

Diplomatic sources believe that even if the Supreme Court asks the government to move to ICJ, Pakistan will not accept the court’s decision. The government is hesitant to go to the ICJ because they believe if India weakens its stand on the jurisdiction of multilateral treaties, Pakistan could demand that the ICJ arbitrate the Kashmir dispute as well, as Delhi had violated UN Security Council resolutions.[1]  India joined the International Court of Justice in 1974, by  initiating 11 exceptions in which  New Delhi will not accept the Jurisdiction of the ICJ and the second exception states that “ disputes with the government of any State which is or has been a Member of the Commonwealth of Nations”, this clause is considered as an obstruction for India which further restricts them to move to the ICJ.

Further both the nations should accept the jurisdiction of the ICJ then only the case can be dealt by the International Court of Justice.

WHY NOT CONSIDER GENEVA CONVENTION?

The Geneva Conventions are the rules that have been agreed upon by various nations and apply usually in the times of conflict. The convention aims to protect the people who are not taking part in hostilities, including sick people, prisoners of war and civilians.

There were four Geneva conventions :

WHEN DOES GENEVA CONVENTION APPLY?

Geneva conventions do not apply to the civilians in non-wartime period. The conventions are designed to provide mutual assurances between nations that the troops, sailors and  civilians can expect human treatment. They are intended to those who are caught during these conflicts will not be treated inhumanely. While these conflicts are difficult to enforce during open conflict. The UNSC rarely invokes its authority regarding the Geneva Convention. However some issues regarding the Geneva Convention are resolved by the regional treaties related to it by national laws. Although the most serious violations are called “grave breaches”, and occasionally classified as war crimes.

Now that the NDA government has classified Captain Saurabh Kalia an exceptional case and even the Supreme Court even given assent to refer to the ICJ, the country awaits what the current steps that would be undertaken by the Indian Government.