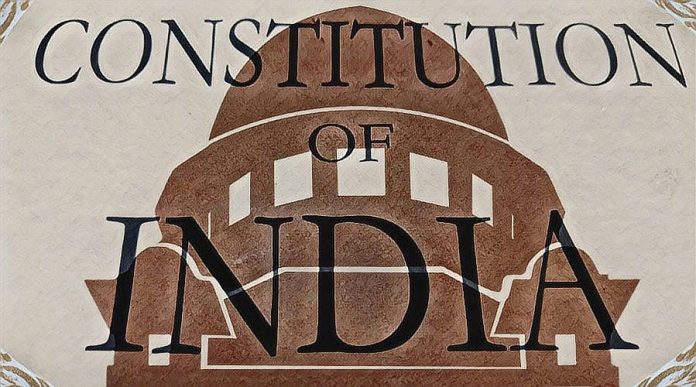 This article is written by Priyanshi Soni, a B.A.LL.B. student of Symbiosis Law School, Noida. This article seeks to highlight the wide aspect of Article 21 of the Indian Constitution in light of a recent case of Nandita Haksar v. State of Manipur & others, which dealt with granting of protection to people who illegally entered India to seek asylum.

Every person has the right to live freely with full dignity and availability of human conditions. This is what makes a successful democracy. Article 21 of the Indian Constitution ensures this right to everyone.  It is a fundamental right granted to everyone (citizens and foreigners both) under Part III of the Indian Constitution of 1950. This provision is exhaustive in its nature as the terms ‘right to life and liberty’ encompasses various rights that are fundamental to humans.

Article 21 covers many aspects of personal liberty and right to life. It ensures protection to these two things only against “state” and not against “private individuals”. Article 21 corresponds to the Magna Carta of 1215, the Fifth Amendment to the US Constitution, Article 40(4) of the 1937 Irish Constitution, and Article 31 of the 1946 Japanese Constitution. But what makes the Indian Constitution different from these rules on life and liberty is that the Indian Constitution treats individuals with an aim for overall development and well-being and protection from any sort of aggression by the state, whereas these other provisions treat individuals merely as physical entities. Except according to the procedure established by law, states preserve the personal liberty and life of an individual.

The scope of personal liberty in India has widened since the Maneka Gandhi case. Before this case, it was relatively narrower in scope.

In A.K. Gopalan vs The State Of Madras (1950), the Court viewed Articles 19 and 21 too narrowly. In this case, the petitioner was detained under the Preventive Detention Act, 1950 in jail and so filed a writ petition under Article 32 that this hampered his rights under Articles 19(1)(d) and 21. The court held that Article 21 which protects personal liberty, implies personal liberty in the sense of the physical body’s liberty and not rights given under Article 19. The petitioner’s contention was thus dismissed.

Finally, Maneka Gandhi v. The Union of India (1978) proved to be a landmark case under Article 21 and led to the evolution of law further under Article 21. The facts of the case go such that the petitioner’s passport was detained by the government officers and they stated that this is done in the public interest as per the Passport Act, 1967. They did not even state a proper reason for such detention. It was thus held that the detention was arbitrary. Personal liberty covered under the Article is very wide and includes all kinds of liberties given to a person. Hence, the right to travel is also included in this very article. The only procedure established by law can restrict this right provided it is not arbitrary and discriminatory, as it was in this case.

With the Maneka Gandhi Case, the scope of Article 21 got expanded to a great extent and proved to be an important right for people’s protection and good.

The present scope of Article 21

We shall now look into what exactly constitutes the right to life and personal liberty today.

Right to live with dignity

In a very recent landmark judgment of Navtej Singh Johar v. Union of India (2018)  dealing with homosexuality, it was held that the right to live with dignity includes all those rights which enable a person to lead a respectful life in society without any disturbance to his personal safety, privacy, and respect. Thus, the Court then decriminalized gay sex and scratched Section 377 of IPC.

Article 21 also covers that every man and woman should get equal opportunity to earn his/her livelihood so that they can have a minimum standard of living with necessities. This concept comes under the right to live with dignity. Olga Tellis and Ors. v. Bombay Municipal Corporation (1986) tried settling a ground for recognition of the right to livelihood where although it was held that the expulsion of slum occupiers was not wrong on the part of the government, they should not be considered as trespassers and should be expelled after some time.

The first case where the right to privacy was recognized was R. Rajagopal v. State of Tamil Nadu (1994). In this case, a prisoner wrote his autobiography and mentioned about the government officials in it that they too were his partner in several crimes. The officials stopped the publication of the autobiography and so the editor filed a petition. It was held that it is the prisoner’s private information and it depends upon him about whom he wants to write in his autobiography and so he should not be stopped from getting it published. This set a precedent for future cases regarding recognizing the right to privacy as a fundamental right.

Many other rights such as the right to die with dignity, the right to medical assistance, sleep, etc, have also widened the scope of Article 21, thereby becoming a part of the law of land.

The case of Nandita Haksar v. State of Manipur & Ors

In a very recent judgment by the Manipur High Court, the scope of Article 21 was further widened to include the right of non-refoulement for asylum seekers i.e. not forcing the refugees to go back to their country from where they fled as they were subjected to prosecution there. Government Advocate RK Umakanta appeared for the State of Manipur and ASG S Suresh appeared for the Central Government. The petition was filed by Nandita Haksar as a party-in-person.

In this case, a petition was filed by Ms. Nandita Haksar, who is a human rights advocate, as a party-in-person with the prayer that the 7 Myanmarese which included children, men, and women, who entered India illegally after persecution and military coup in Myanmar, be allowed to be sent to United Nations High Commissioner for Refugees (UNHCR) in New Delhi to seek protection there.

The narrative given by the petitioner was such: A military coup took place in Myanmar in February 2021 and following that, the military banned Mizzima (Myanmar’s news service) and detained several of its journalists. 3 of the 7 people mentioned were working with Mizzima. They fled their country in fear of persecution and took shelter in a district in Manipur. In fear of them being sent back to Myanmar by Assam Rifles which was directed by the Home Affairs Ministry to check illegal migrations in border areas in March 2021, they took the help of the petitioner. They did not have proper documents with them. Thus, the petitioner sought their safe passage to New Delhi’s UNHRC. The petitioner also contended that there is a difference between “migrants” and “refugees”. A migrant is someone who moves from one place to another in search of better livelihood etc., but a refugee is someone who is forced to his country for persecution or natural disaster.

The respondents argued that these seven persons should first face the consequence of their illegal act of entering India and should not be granted protection as they can be a possible threat to the country too. It was also asserted by respondents that the constitutional freedoms available under Article 19 are limited to citizens and these seven persons cannot claim such freedoms under Articles 19(1)(d) and 19 (1)(e), with regard to moving freely or residing/settling in any part of the territory of India. Mr. R.K.Umakanta, the learned Government Advocate, argued that domestic laws must first prevail and if court permits such entries then this might set an unhealthy precedent and open floodgates.

Findings of the court

The court noted that although India is not a party to the Geneva Refugee Convention, 1951, and The New York Protocol of 1967, it is, however, a part of the Universal Declaration of Human Rights, 1948 and Article 14 of UDHR states that everyone has the right to seek asylum in other countries due to persecution. India is a party to the International Covenant on Civil and Political Rights, 1966 as well which recognizes that the human family has certain inalienable rights such as freedom, justice, etc. The court also stated that India is amongst the 193 member countries of the UN General Assembly that endorsed the ‘Global Compact on Refugees’ in December 2018. Talking about our Indian Constitution, Article 51 of the Constitution talks of promotion of international peace and security by maintaining honorable relations with the nations, understanding international laws, etc. Finally, the Court stated that Article 21 of the Indian Constitution shall include the right to asylum seekers if they have been persecuted in their country and take refuge for protection. Although refugee laws are rather opaque in India, such refugees cannot be straightaway denied protection. They can seek protection under various other laws to which India is a signatory, as we saw above, as well as under Articles 14 and 21 of the Indian Constitution which applies to non-citizens as well.

A Bench of Chief Justice Sanjay Kumar and Justice Lanusungkum Jamir held that even foreigners can take protection under Article 21 of the Constitution and so, this provision respects the non-refoulement principle, which in international law, gives protection to asylum seekers from getting expelled by another country where they have sought asylum because of persecution in their own country.

The Court, therefore, held that the seven people seeking asylum as per the writ petition shall be given safe passage to New Delhi where they can apply for protection from the UNHCR.

Also, the court rejected the contention that they might be a threat to the security of India as no material document supported this, and also 4 of the 7 people were UNHCR certified refugees. One of them was also sanctioned as Visa Gratis by the Indian Government in 2020. This clearly showed that they are not a threat to security.

Lastly, the Court noted that this is not the first time that type of case is being taken as earlier in Zothansangpuii v. State of Manipur and Another (1989), a Burmese refugee who illegally entered India was granted permission to go to Delhi to get protection when he approached Guwahati High Court. It added that India respects UNHCR’s recognition of such people who are persecuted, especially Afghanistan and Myanmar. But, since UNHCR’s office is located only in New Delhi, it is only after such people are granted ‘refugee’ status that things can proceed.

In the case discussed above, the already wide ambit of Article 21 was further expanded to include the right of non-refoulement of persecuted asylum seekers. This was a commendable decision by the Court towards the betterment of the common people. Such people who are persecuted should not be made to face the violence again. It is a basic human right to life and liberty and Article 21 fulfills this very fundamental right for all the people.