This article is written by Srijita Adak, pursuing a Diploma in Advanced Contract Drafting, Negotiation, and Dispute Resolution from LawSikho.

In the event that a business association doesn’t extend their networking capital enough, they need to fight for covering its bills. Yet, if they increment the functioning of working capital too much, the productivity of the association can be reduced. To stay away from issues, associations need to use sound decisions which crossover between how current assets and current liabilities are utilized. The reason behind the working capital management is to guarantee that adequate money is accessible to meet everyday income needs, pay wages and pay rates when they fall due, pay creditors to guarantee proceeds with provisions of labor and products, pay government tax assessment and supplier of capital-profits and guarantee the long-term endurance of the business organisation. 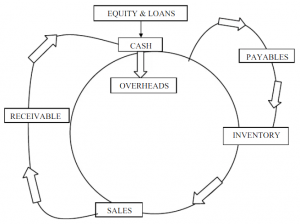 It is the timeframe that slips by where money starts to be used on the creation of an item and the assortment of money from a client. There are inventories, receivables, and payables and each one of them has two degrees- time and money. Exactly when they come to administering working capital time is money. In the event that you can get cash to move quicker around the cycle (gather monies due from indebted individuals all the more rapidly) or lessen the measure of cash restricted (decrease inventory level comparative with sales). The business will produce more money or it should acquire less cash to finance working capital. As an outcome, we could diminish the expense of bank revenue or we will have extra free cash accessible to help the expansion of deals, development, or speculation.

Banking sector is a stepping stool to different areas for their improvement and their development. Accordingly, a solid bank area is needed for the financial development of a country. After the changes in 1991, banks are developing by jumps and leaps. The amendment of the Banking Regulation Act in 1993 saw the evolution of new private sector banks. This fragment extensively comprises:

Here we need to understand the commercial banking structure. It consists of- 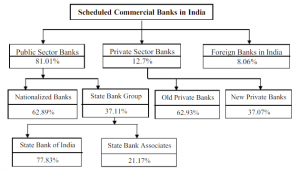 Scheduled Commercial Banks set up those banks which have been added to the second schedule of the Reserve Bank of India (RBI) Act, 1934. RBI accordingly adds those banks for this schedule that satisfy the guidelines put down vide region 42 (60) of the Act. This sector can be divided into-

The law administering banking exercises in India is known as the “Negotiable Instruments Act 1881“. The financial exercises are mentioned hereinafter:

The present situation of banks

At present, by and large, banking in India is considered as genuinely developed. Indeed, even as far as nature of resources and capital ampleness is considered, Indian banks are considered to have spotless, solid and straightforward accounting reports when contrasted with different banks in equivalent economies in their district. The Reserve Bank of India is a self-sufficient body, with insignificant pressure from the public authority. The expressed strategy of the Bank on the Indian Rupee is to oversee unpredictability expressed conversion scale and this has generally been valid with no expressed conversion scale. With the development in the Indian economy expected to be solid for a long while particularly in its administrations area, the interest for banking administrations especially retail banking, home loans and speculation administrations are required to be powerful. M&A, takeovers, resource deals and considerably more activity (as it is unwinding in China) will occur on this front in India.

The first run through a financial investor has been permitted to hold over 5% in a private sector bank since RBI declared standards in 2005 that any stake surpassing 5% in the private sector banks would should be checked by them. Presently, India has 88 Scheduled Commercial Banks (SCBs), 28 Public Sector Banks, 29 Private Banks (these don’t have government stake; they might be freely recorded and exchanged on stock trades) and 31 Foreign Banks. They have a consolidated organization of more than 53000 branches and 17000 ATMs. As indicated by a report by ICRA Limited, a rating office, the public sector banks hold more than 75% of absolute resources of the banking sector, with private and foreign banks holding 18.2% and 6.5% separately.

SBI’s roots can be traced back to the first bank of India, the Bank of Calcutta, which was founded in 1806. However, SBI’s direct predecessor was the Imperial Bank of India. The State Bank of India arose as a pacesetter, with its tasks completed by the 480 workplaces containing branches, sub workplaces, and three local head offices, acquired from the imperial bank. Rather than filling in as simple archives of the local area’s reserve funds and loaning to reliable gatherings, the State Bank of India obliged the requirements of the clients, by banking deliberately. The bank served the heterogeneous monetary necessities of the arranged financial turn of events.

The organisational structure of SBI is very strong. There are other private financial banks that were in a difficult situation in light of overburden and in the meantime SBI was dealing with multiple times of responsibility. You can discover SBI branches and ATMs in regions we won’t anticipate that they should be there. 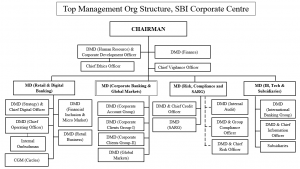 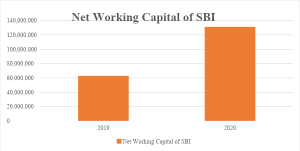 This is an analysis of working capital management for the year 2019-2020. The findings of this analysis are-

Overall the organization has a great liquidity position and adequate assets to reimbursement of liabilities, however, the company has acknowledged a moderate monetary approach to keeping up with more current resources balance.

After analysis we can come up with some suggestions which can be utilized for the development of the company. They are-

Overall the organisation has a great liquidity position and adequate assets to reimbursement of liabilities. Organisation has acknowledged traditionalist monetary arrangement and hence keeping up with more current resources balance. Organisation is expanding deals volume each year which is upheld to the organization for supporting it to sustain in India. From this analysis, we can see that the general working capital (WC) of the State Bank of India has expanded by in excess of 100% over the most recent years which is a critical pattern and this pattern gives a strong structure for the wellbeing of the organisation.