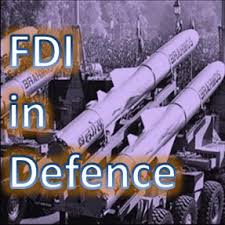 In this blog post, Pranav Rudresh, Student of Lloyd Law College, Greater Noida and the Diploma in Entrepreneurship Administration and Business Laws by NUJS, discusses the advantages and the disadvantages of the Government’s decision to move 100% of FDI  in the defence sector. 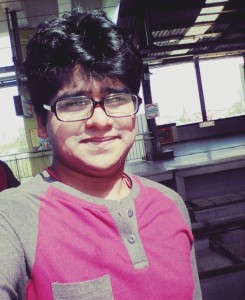 FDI or Foreign Direct Investment is an investment which is made by any company (entitled to a nation) into a particular economy/country. It is a method of direct investment into any economy. It is a fundamental component in global integration. It is one of the major forms of cross-border investment. A company or enterprise, or a resident in a given country, can operate its enterprise in another country through investment. FDI is amongst the key issue of foreign policies of almost all countries. The enterprises based in developed economies can invest directly and open its branches in another country (underdeveloped or developing), it can use the adopted country’s resource for its work and in return give money to the workers. This not only helps in the development of the economy but also gives the workers a fair idea of how an enterprise operates. It provides long lasting interests to the enterprise as well. 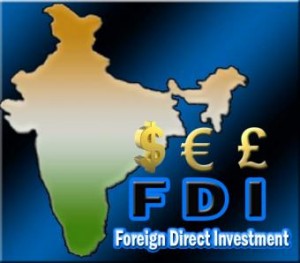 The investing company can make its overseas investment in some ways—either by setting up a subsidiary or associate (with the same name of the company) in the foreign country and by a partnership of shares of an overseas company, or through a merger or joint venture. In India, FDI was first brought up after the economic crisis of 1991. Former PM Manmohan Singh and the then PM Shri PV Narasimha Rao are credited for bringing FDI in India which relaxed the economy and generated more than one crore jobs. In 2015, India became the largest destination for FDI surpassing China.

An example of foreign direct investment can be an Indian company taking a majority stake in a company in China. Another example would be a Canadian company setting up a joint venture to develop a mineral deposit in Chile.
For a developing nation like India where over-population and poverty together are a major issue, FDI is an important sector through which the government can bring employment to all sectors on a large scale. Recently, the Modi-led government enacted 100% FDI in defence as well as the civil aviation department (the FDI has been eased in other departments as well such as food, medicine, etc.). It is to be noted that the addition of FDI into the Defence and Civil Aviation Sector has been approved by all channels and is stated to be the “Need of the Hour” by the Central Minister Shri Venkaiyah Naidu.

The Advantages and Disadvantages of 100% FDI in the Defence Sector

While this move may prove to be a big boost for our economy, there are some disadvantages against this decision. Firstly, let’s take a look at what are the positives of the 100% FDI in the defence sector:

Like the two sides of a coin, despite being beneficial, the liberalization of FDI also includes some negative points.

How will 100% FDI in the Defence Sector Benefit India?

A good FDI can significantly pave the way for an increase in farmers’ income, employment to youth and an impetus for the growth of the small and medium industry. This would help start micro, small and medium industries which would pave the way for jobs for our youth. FDI can lead to the creation of a congenial atmosphere that attracts investment. For a developing country like India, it is better to accumulate debts and later pay them at higher interest rates because of the currencies in the world being highly unstable. 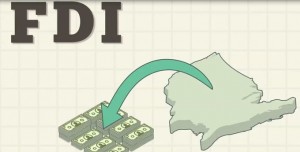 At present, India is amongst the largest importers of machinery in the defence sector. Compared to the developed countries, India lacks in its defence equipment production capability. A greater inflow of FDI in the Defence sector provides a chance of substantive economic advantages. The increased flow of funds from a foreign source and greater FDI leads to more employment opportunities for the local population. It also means that taxes and other revenues will flow back to the local economy. Most industry associations and foreign firms have demanded that the FDI cap is increased to 100 percent since they believe that the Government of India will insist on Indian control over any defence manufacturing company. India’s main aim of technology enhancement, as foreign vendors, will not transfer critical technologies without ownership and management control of the Indian
venture. Better than taking loans from world based organizations, an increase in FDI levels will be preferred to overcome the drawbacks currently faced by a FDI cap of the earlier percentage. The FDI cap thus needs to be at a higher rate so as to make a significant difference to the Indian Defence Industry.

How wl 100% FDI in the Defence Sector not Benefit India? 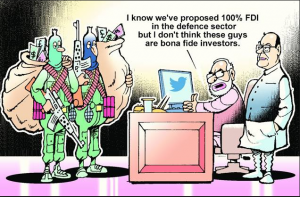 A 100% inflow of FDI in the Defence sector will  kill the domestic sector, as well as the Indian protection Manufacturing Sector-related organizations, such as DRDO, are going to suffer major setbacks. While the transfer of technology from foreign sources may increase, the advantages of having homemade products will decrease by mass. It is a clear fact that Indian companies won’t be able to compete with the international manufacturers as they may have production co-operation issues. This will even prove to be worse for DRDO, which has not been able to give its 100% since establishment due to the lack of local resources.

One of the major setbacks that India will face with 100% FDI in the defence sector will be that the economies that will invest in production in India will know the defence product manufacturing limit of India. If India aims to be a superpower, it cannot be possible just with the production of what the other developed nation are or have been producing. The technological setback thus makes the FDI a matter of concern.

For a country sitting with hostile neighbors, its biggest priority of the government is to ensure its safety. Any economy cannot be self-sufficient, and it is not possible to battle against problems like terrorism by just risking lives. Technology thus becomes an important tool in covering such hazards. The hard reality is that our defense sector needs a good overhaul, and our government needs to allocate sufficient budgets for production of defense material. The military expenditure of a developed nation like the USA is around 600 billion dollars compared to a mere 65 billion dollar expenditure by India when it comes to maintenance of army and defense equipment. Thus, to achieve the defence capability dreams that India has, higher FDI may be a pure and important source that needs to be brought up. It must be however kept in mind that it doesn’t harm the local industries.