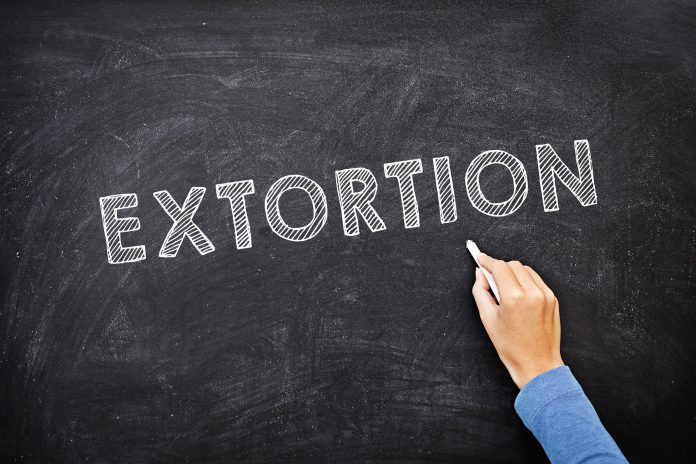 This article is written by Kanisha Goswami, a law student of Guru Gobind Singh Indraprastha University. This article discusses about extortion and the difference between theft, robbery, and extortion.

The current article deals with the offence of extortion which comes under the purview of offences against property which extends from Section 383 to 389 of the Indian Penal Code. Extortion is an offence where any person intentionally induces or threatens or so put in fear to deliver any property or valuable security or any signed or sealed document which may be changed into valuable security of another person. Currently, extortion can be a threat of physical violence, the threat of destruction of property, or imminent criminal action. This could consist of physical harm, financial harm, destruction of property, or abuse of official power. In other words, making the threat is sufficient and the actual obtainment of money or property is not required to commit the offence.

Extortion is the unlawful exaction of money or property through intimidation or coercion. In earlier times, threats of violence and blackmail were probably the two most popular ways to extort a person. Extortion was typically carried out by gangs who forced businessmen to pay up or to face the consequences.

Modern age extortion is cyber-extortion where threat and unpleasant consequences involve the disclosure of an organisation’s information or an attack on a company’s electronic infrastructure. If someone can hack into a business system and steal data, he or she can threaten to delete or release the data unless the business pays up.

The term ‘Extortion’ is defined under Section 383 of the Indian Penal Code, 1860 as “ When someone intentionally puts any person in fear of any hurt to that person, or any other person and thereby, deceitfully induces the person so put in fear to hand over that person’s  property, or any valuable security or anything signed and sealed which may be changed into a valuable asset commit, extortion.” In short, it can be said that extortion is forcing someone to transfer his or her treasures through force or threat to cause harm. It is a wrongful loss to the property holder and wrongful gain to the extortioner.

1. Deliberately putting a person in fear of hurt or injury

A person must have a mala fide motive to cause a wrongful gain to the extortioner and wrongful loss to the owner. The actual delivery of property is required to constitute extortion.

In R. S. Nayak v. A. R. Antulay (1984) Chief Minister A.R. Antulay interrogated the sugar cooperatives, whose cases were undecided before the government for consideration, and promised to look into their cases. The Supreme Court held that these facts do not constitute the offence of extortion. For extortion, fear and threat are essential elements. It was proved that the management of sugar cooperatives had not been put in any fear and the contribution was paid with their consent.

2. Dishonest inducement to the person

In Biram Lal and Ors. v. State (2006), the complainant lodged a file alleging that the accused and other members of the same community have established an illegal or unlawful offence by humiliating and imposing heavy fines on the members of the community. The Court held that if it was held that in extortion, the person who was put in fear must have been induced dishonestly to deliver his property. It is an essential feature as consent will be taken through the dishonest inducement of the owner. The act of inducement caused by the culprit had to make at least the consent of the victim to deliver his property even if the actual delivery does not take place but if it fails to bring out any effect, then the act would be considered only at the stage of an attempt to commit extortion.

The thing delivered under this Section may be any valuables or property, or any paper except blank sheet signed or sealed which may be changed into a valuable security.  Valuable security is explained under Section 30 of IPC. If any minor was being beaten and forced to execute a promissory note, the accused who was using such force would be punishable under this Section.

In Anil B. Nadkarni and Ors. v. Amitesh Kumar (2001), the counsel for the accused pleaded that the essential ingredient of the extortion under IPC is a transfer of property which must be done to the accused by the property holder when he is under a threat or fear of an injury but the Court rejected this contention of the accused. The Court held that a person must deceitfully induce another person by putting him/her in fear of harm to deliver to any property or valuables.

In Romesh Chandra Arora v. the State (1960), the accused took a picture of a naked boy and a girl by forcing them to take off their clothes and extorted all the money from them by threatening to publish the picture. Accused said it was his occupation to extort money by blackmailing girls and further he threatened the victims that he would circulate the pictures to the relatives of the girls. He was punishable under Code. Accused was held guilty as he threatened girls that he would ruin their reputation and extort money from them.

In the case of State of Karnataka v. Basavegowda Alias Chandra (1996), the accused (husband) and his wife (the complainant) went to the forest under the pretext of going to the friend’s wedding. He threatened to kill her if she didn’t give all of her ornaments to him. He hit her with a big stone and ran away when he saw two men coming. Here, the Bench convicted the accused under Section 384 of IPC for extortion of jewellery by threatening his wife’s life.

Section 384 of the Indian Penal Code, deals with punishment for extortion, “whoever commits shall be punished with imprisonment which may extend to 3 years, or with fine, or with both.” An offence under Section 384 is not enumerated under compoundable offences (Section 320). It is a cognizable and bailable offence and triable by any magistrate.

Section 385 of the IPC states that if someone putting or attempting to put any person under threat of fear or harm or injury to commit extortion shall be punished with an imprisonment of two years or shall be charged with a fine or with both. The offence under this Section is cognizable. The offence is bailable and triable by any magistrate. This offence is non-compoundable.

Section 386 states that anyone putting any person in fear of death or in fear of grievous hurt to that person or others shall be punished with imprisonment which may extend to ten years and also be punishable with a fine. The offence mentioned under this Section is cognizable, non-bailable, non-compoundable and triable by the magistrate of the first class.

Section 387 states that any person who commits extortion, puts or attempts to put someone in fear of any grievous hurt or death to that person or any other individual shall be punished with imprisonment up to seven years, and also charged with a fine.

In Gursharan Singh v. State of Punjab(1996), the accused was held guilty of extortion under Section 387 for demanding money for the purchase of weapons to be used against terrorists and threatening the persons from whom they are demanding money and frightful consequences if money was not paid to them.

Section 388 states extortion through the threat of false claim of an offence is punishable with ten years and with a fine. Accused extort money by setting any person in fear of a false accusation against that innocent person or other people

Example: C called D and said C will register a false complaint that D murdered someone if one lakhs is not given by D to him.D instantly paid that amount. Here, C will be punishable under Section 388.

Difference between extortion and theft

In Dhananjay Kumar Singh v. State of Bihar (2007), the Court held that in theft, a thief’s intention is always to take property or valuables without the consent of the owner while in extortion, the consent must be taken by fear as the owner should deliver property by giving his consent.

Difference between extortion and robbery

Robbery is only a subtype of extortion. In extortion victims often willingly hand over money, property, or valuable security to avoid violence and damage in the future whereas, in robbery, there is an instant threat to the victim.

In Venugopal and Others v. State Of Karnataka (2008), the Court observed that the large portion of robberies will be half theft, half extortion. Extortion is robbery if the offender at that time in the presence of another person put in fear of death, or instant injury, or wrongful restraint of that person or another person, or induces the person so put in fear of death, or injury, or unlawful restraint. There can be no case of robbery which does not sink within the definition of extortion or theft. Let’s understand this with an example:

B meets W and W’s child. B shows a pistol and puts that on W’s child and says he will kill him unless W gives him his wallet. W, in consequence, delivers his wallet, B has extorted the wallet from W, by causing W to be in fear of harm to his child who is right there. Here, B threatens W and to save his son W gives his wallet. Here, it is by no means improbable that W’s wallet may have been taken by extortion. B has therefore committed robbery on W.

In layman’s words, extortion is an offence where a person forces another person to transfer his property or valuable security under the fear of an injury or threat. Extortion is punishable under Section 384 of the Code,1860. A couple of ingredients have to be satisfied to prove another person guilty. There should be fear or injury or threat, dishonest intention, and a transfer of property. However, the courts have now taken a different approach, if the complainant successfully proved that the accused had committed an offence whereby all ingredients of the offence may not be satisfied, the court may convict the accused of extortion.